City Council Speaker Christine Quinn visited the Hebrew Home for the Aged in Riverdale today. Along with the Speaker were local Councilman G, Oliver Koppell, and her father. This was Quinn's second visit to Riverdale as she visited the Riverdale YMHA nearby less than two weeks ago. Quinn gave a brief speech including a comment that even with the budget cuts that the city did not cut any funding to senior centers such as the one she was in.

The Speaker took a few questions, and asked her father to answer one about aging. Councilman Koppell helped on another that was a local community question. When asked if she was running for mayor Quinn did not say yes or no, just that she is thinking about it.

In a separate announcement a spokesman for the Hebrew Home said that the home had purchased the property next door known as the Cardinal Spellman Home to expand in the near future. 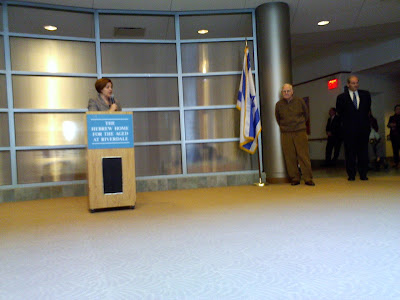 Speaker Quinn addressing the audience, with her father and Councilman Koppell off to the side. 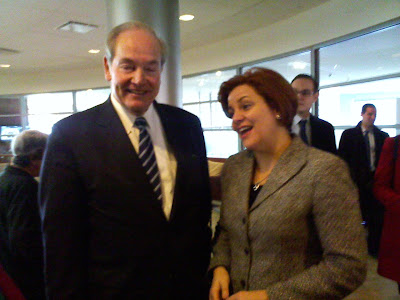 Speaker Quinn and Councilman Koppell pose for a picture.
Posted by 100PercentBronx at 5:40 PM No comments:

Email ThisBlogThis!Share to TwitterShare to FacebookShare to Pinterest
Our Prediction For The South Carolina Republican Primary


With the South Carolina Republican primary set for tomorrow, and the field down to four choices now we thought we would have some fun in getting out our crystal ball and asking it who the winner will be.
We saw all four candidates names whirling around in our crystal ball Romney, Gingrich, Santorum, and Paul. Our crystal ball reminded us that it was Rick Santorum that won the Iowa caucus and not Mitt Romney, and that fact may have a difference on the South Carolina primary.
We said, so who is the winner, and don't say President Obama again. The one name that surfaced as the winner of the South Carolina primary was Rick Santorum. Our Crystal ball said since the candidates took off their mitts and went after Romney, that Santorum gained the most. No other name surfaced, and we guess that at least one more candidate will duck out of the race after South Carolina.

We know that candidate Santorum is currently last in the polls, but we love an underdog.

And Now There Are Four Left


Rick Perry is the latest candidate to DUCK OUT of the race for President. Perry has endorsed Newt Gingrich to be the Republican choice to run against President Barrack Obama. 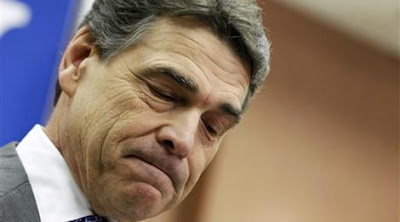 Who does this really help?
Posted by 100PercentBronx at 2:21 PM No comments:

New York State Senator Jeffrey D. Klein (D- Bronx/Westchester) and New York City Councilmember James Vacca (D-Bronx) announced today that they had received assurances from the Metropolitan Transit Authority (MTA) that the Bx24 bus would finally be extended to run along Westchester Avenue to Westchester Square.  For well over a year, Klein and Vacca supported community efforts to get the MTA to extend the bus route past Pelham Bay Station.

The MTA also announced that the Bx5 bus would return to its previous route along Bruckner Boulevard towards Pelham Bay, rather than run along Crosby and Westchester Avenues.
The announcement is seen as a successful conclusion to their outreach and efforts, which included constant communication with MTA officials throughout the year.  Last April, Senator Klein hosted an MTA town hall meeting in Country Club with top brass of the Authority which forced them to listen to the communities concerns.  The town hall meeting attracted well over one hundred residents who were uniform in their desire to see the Bx24 extended to Westchester Square and the Bx5 rerouted back to Bruckner Boulevard.  Councilmember Vacca, as chair of the City Council Transportation Committee, used every opportunity, both publically and privately, to convey to high level MTA officials that restoring service on the Bx24, at least to Westchester Square, was an action that he and his constituents considered a necessity. He also submitted to MTA officials hundreds of petitions that his office had collected, demanding restoration of service and making it clear to them that this issue was not going to go away.
“For more than a year, I've been working with community leaders to push the MTA to properly serve neighborhood residents and provide comprehensive service to Westchester Square. I demanded that the MTA hold an open public forum in my district, so they could hear directly from those Country Club and Spencer Estates residents who were ill-served by the current system. We stuck together, spoke in one voice and -- because of that -- we were able to achieve this very important victory" said Senator Klein.
“When I sink my teeth into something, I don’t let go, and I wasn’t going to let go on this one. Much more than MTA officials, I know the Country Club community and I know that not giving residents access to Crosby Avenue and Westchester Square meant that many of them could not make doctors’ appointments or do food shopping without using their cars or arranging for someone to take them. We certainly pay enough taxes to have basic bus service and I refuse to settle for anything less!” said Councilmember Vacca
“This is really great news” said Marcia Pavlica, President of the Country Club Civic Association “It shows that Westchester Square is not off bounds to us and is a very important part of our larger community. It also shows our elected officials kept on top of this and delivered for our neighborhood.”
"Bronx Community Board #10 is gratified to note that through the joint efforts of all of our elected officials, and our Board, that service to Country Club community, along the BX 24's route has been restored. The Board was proud to work with our elected officials and the MTA to restore this vitally needed service." Said Kenneth Kearns, District Manager of Bronx Community Board #10
The route changes will be voted upon at the MTA Board on Monday, January 23rd 2012 and will be implemented in April 2012.
Residents who have questions regarding the route can call either Senator Klein’s Office at (718) 822-2049 or Councilmember Vacca’s Office at (718) 931-1721.
Posted by 100PercentBronx at 2:09 PM No comments:

Another Candidate DUCKS OUT of the Republican President Primary Race


Former Utah Governor John Huntsman has become the second Republican presidential candidate to duck out of the race. He now joins Congresswoman Michele Bachmann as a former candidate.
Posted by 100PercentBronx at 7:31 PM No comments: