U.S. Attorney Damian Williams said: “Rather than express his political differences constructively, Rickey Johnson escalated his discord by instilling fear. Johnson's attempts to scare and stifle a U.S. Senator and two Fox News hosts were federal crimes for which he has now been convicted by a New York jury.”

According to court documents and the evidence at trial:

On January 30, 2021, JOHNSON sent direct private messages to Mr. Gutfeld that threatened, “you will be killed.” On February 3, 2021, JOHNSON posted public videos in which he threatened to kill Senator Manchin, Mr. Gutfeld, and Ms. Ingraham. Among other things, JOHNSON declared that Senator Manchin was “dead” and would be “executed”; told Mr. Gutfeld that he was “going to take [his] life”; and said that he would “kill” Ms. Ingraham with his “bare hands.”

JOHNSON, 48, of New York, New York, was convicted of two counts of transmitting threatening interstate communications, which each carry a maximum sentence of five years in prison, and one count of threatening a federal official, which carries a maximum sentence of ten years in prison. JOHNSON was also acquitted of one count of threatening a federal official. The maximum potential penalties are prescribed by Congress and are provided here for informational purposes only, as any sentencing of the defendant will be determined by the judge.

JOHNSON is scheduled to be sentenced by Judge Kaplan on May 25, 2022. 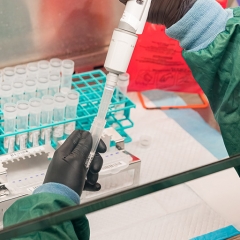 Hospitalizations Below 2,000 for The First a time Since November 14

“New York State continues to lead the way in beating back COVID, but we must continue to work together to fight this virus,” Governor Hochul said. "These positive trends are a result of New Yorkers’ hard work and dedication to protecting one another. If you or your child haven’t gotten your shot, sign up today to help us in our ongoing fight against COVID-19.”

While the end of February marks the end of Black History Month, it is important to recognize that celebrating, uplifting, and reflecting upon Black history does not begin or end with this month. Each and every day, we should be celebrating and honoring Black joy, Black excellence, and Black leadership in our communities and working to uplift and support our Black communities to build a better, more equitable future for all.

To close out this month, I would like to take a moment to celebrate and recognize an amazing Black community leader in District 34 who works tirelessly to better our community– Latanya DeVaughn. When Latanya recognized the need for more bookstores in the Bronx, she decided to take matters into her own hands by starting Bronx Bound Books. Bronx Bound Books is a mobile bookstore that travels across the Bronx to provide Bronxites access to thousands of books which they otherwise may not be able to access. Since founding her mobile bookstore, Latanya has taken her bookstore across the borough, parking her bus at spots like the Riverdale Y Sunday Market, the Bronx Night Market, schools, and more.

Through her work, Latanya seeks to meet people where they are and bring her love of community and reading to the Bronx. I extend my deepest gratitude to Latanya for her service to District 34 and beyond, and look forward to continuing to support her work in the community.

Read more about Latanya and her work here.

Check out our Black History Month social media feature on Latanya and other incredible Black leaders in District 34 on my Instagram or Facebook pages.

A Caldwell woman was sentenced to 12 months and one day in federal prison for bank fraud.

According to court records, Melissa A. Castellanos, 52, of Caldwell, worked as a financial specialist and office Manager at Aspire Human Services in Idaho. Her duties included overseeing the Social Security Administration payee accounts for residents of Aspire’s intermediate care facilities. The intermediate care facilities provided residential and vocational services to developmentally-delayed or intellectually-challenged or disabled adults. From at least July 2015 through August 2017, Castellanos executed a scheme to defraud that included preparing and cashing checks for fraudulent purchases on residents’ accounts. Castellanos wrote inaccurate descriptions in the memo lines of the checks to help conceal her actions. After preparing and signing the checks for fraudulent purchases, Castellanos cashed the checks. In violation of company policy, Castellanos went to the bank alone, instead of brining the residents whose money she was taking. Castellanos kept the cash and did not provide it to the residents or use it to purchase the goods identified in the memo lines.

“Stealing social security benefits from vulnerable victims is a serious crime,” said U.S. Attorney Rafael M. Gonzalez, Jr. “This office will continue to work with SSA and other agencies to protect the public from defendants who are willing to abuse a position of trust for financial gain. Together with our partners at SSA Office of the Inspector General, we will continue to hold accountable those who commit crimes involving Social Security benefits.”

“Ms. Castellanos abused her position of trust to steal the funds of Social Security beneficiaries who relied on the agency to provide for their essential needs. My office will continue to hold accountable individuals who commit Social Security fraud,” said Christian Assaad, Acting Special Agent in Charge, Social Security Administration Office of the Inspector General, Seattle Field Division. “I want to thank our law enforcement partners and the U.S. Attorney’s Office for their work in this case.”

Three individuals were arrested in connection with a large-scale heroin/fentanyl packaging mill in Maspeth, Queens on Tuesday night. Members of the New York Drug Enforcement Task Force (NYDETF) recovered more than five kilograms of narcotics (over 11 pounds) from two apartments located on a residential block near Calvary Cemetery. The suspected heroin/fentanyl recovered at the mill is estimated to carry a street value of more than $1.5 million.

On February 22, 2022, at approximately 9:35 p.m., members of NYDETF Group T-42 conducted a court-authorized search of the basement and second floor apartments at 51-66 48th Street. As agents and officers entered the premises, ARGELIZ NUNEZ, PABLO RODRIGUEZ and TIESHA CRUZ were observed leaving through the front door of the basement apartment. Agents and officers stopped the trio and recovered a loaded.22 caliber firearm from RODRIGUEZ’s pants pocket.

Inside the basement apartment, a small room off the main living area contained a table with a large quantity of loose narcotics in powder form on top, along with gallon sized ziplock bags of additional quantities of narcotics in powder form. Also present was a cardboard box filled with thousands of individual dose glassine envelopes filled with suspected heroin/fentanyl. Two brick-shaped boxes containing suspected narcotics sat on the table and the floor. A cooler bag contained another four large black bags filled with narcotics. Mail addressed to RODRIQUEZ was found in this apartment.

A search of the second floor apartment uncovered a table inside a bedroom with five ziplock bags of narcotics in loose powder form and drug residue on the tabletop. The apartment contained glassine envelopes stamped with many different brand names, such as “Black Widow,” “Asylum” and “Gucci.” Mail addressed to NUNEZ was present in the apartment.

Members of NYDETF, Group T-42, seized four vehicles allegedly associated with members of the drug trafficking organization. A 9mm handgun was recovered from a Sprinter van.

A total of more than five kilograms of suspected heroin/fentanyl were recovered from the two apartments. The results of DEA laboratory testing are pending to determine the type of drugs present. The New York Drug Enforcement Task Force, Group T-42, is comprised of agents and officers with DEA New York Division, the New York City Police Department and the New York State Police.

RODRIGUEZ and CRUZ were arraigned in Manhattan Criminal Court on Wednesday night. The arraignment of NUNEZ is pending.

The charges and allegations are merely accusations and the defendant is presumed innocent until proven guilty.