The reason that Mayor Bloomberg has predicted that there may be rioting in the streets soon, is because if the poor job market does not improve Bloomberg says that we may see what happened in Madrid, Cairo, and other cities happen here. Civil disorder about spending money on items other than job creation in high unemployment sparked the rioting abroad, and similar circumstances here could become the catalyst for local civil disobedience. According to Bloomberg more college graduates are finding less jobs in the current job market, and that was why he praised the latest job plan by President Obama.
The Republican House Speaker Congressman John Boehner of Ohio has drawn a line in the sand however to Obama as to the raising of taxes on the rich to pay for the jobs plan that benefits the middle class. The Republicans hope to stymie President Obama in this period of lower approval ratings for the president right before the 2012 presidential election.
Posted by 100PercentBronx at 6:56 PM No comments:

Borough President Diaz Brings 'Peace in our Streets' to Soundview

Bronx Borough President Ruben Diaz Jr. brought his "Peace in our Streets" initiative to the James Monroe Houses in the Soundview section of the Bronx. Borough President Diaz, along with Assembly Member Marcos Crespo, City Council Member Fernando Cabrera and dozens of volunteers went door to door in each building of the complex, handing out information on the NYPD's 866-GUN-STOP program. The program offers cash rewards to individuals who anonymously report illegal gun activity. 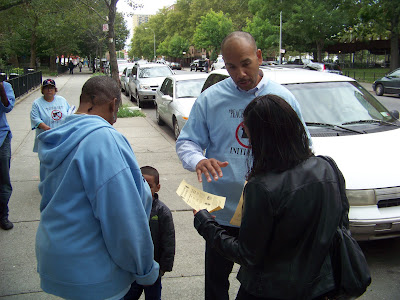 BP Diaz with volunteers handing out flyer's, and talking to community members about gun violence.

The Jerome–Gun Hill BID is proud to announce that the 10 Year Anniversary Reunion Celebration of the Jerome–Gun Hill BID Street Festival will take place on Saturday, September 24, 2011 from 11am to 6pm. Located on Jerome Avenue between Gun Hill Road and Mosholu Parkway in the Norwood section of the Bronx, this is an annual celebration boasting over 30,000 festival-goers, 25 performance acts, children’s games and activities, merchandise vendors, and of course, lots of food.

A free event, created in 2002 to promote the businesses within the Jerome-Gun Hill BID and invite over 200 BID merchants, food & product vendors and corporations to showcase and sell their goods and services to Bronxites and fellow New Yorkers, the JGHB Festival has become one of the most anticipated annual events in the borough, focusing on neighborhood unity and drawing thousands of participants of all ages and backgrounds. The festival was also founded as a way to give back to the community and allow the community to celebrate the cultural diversity of the Norwood neighborhood and its rich historic past.
An Al Pizarro production, co-produced with Record Pool, Clearview Festival Productions and Marketing & Advertising Solutions (MAS) and through the generous sponsorship of the Jerome-Gun Hill Business Improvement District (BID), Healthfirst, The New York Daily News, Ridgewood Savings Bank, Radio Disney and many others, this year’s event will feature several live performances by hit artists such as Grammy Award winner and platinum recording artist Freedom Williams of C & C Music Factory, Grammy nominated New Swing Sextet, the Phony People Band, and Latin sensation Anayka. This incredible line up will be hosted by Ray Raimundi from News 12 The Bronx, longtime MC and Harlem Lanes’ most popular DJ, Krazy Rob, Artie of the Diamante Cable Show, and will feature DJ Jazzy Jay and DJ Cheeky Star.
Throughout the day, festival-goers will have the opportunity to enter and play in world tournaments of Chess and Dominos, and have a chance to watch a special "old school" rapper celebrity basketball game with special guests Hot Sauce of the And 1 Mixtape Tour and Rucker Playground Tournament, music producer D'Anthony, Ox from The Fushnickens rap group and Tony from Father MC. Bronx Sports and Eric Hicks of Game Over Gear will also be joining the festivities. The Disney Road Crew will be there all day with showtimes at 1pm and 4pm. Giveaways, prizes, clowns, face painting, a bounce house and much more is in store for this special 10th anniversary celebration.
Event: Jerome–Gun Hill BID Festival
Date: Saturday, September 24, 2011
Time: 11am – 6pm
Location: Jerome Avenue between Gun Hill Road and Mosholu Parkway
Admission: Free
………………………………………………………………………………………………………
About The Jerome-Gun Hill Business Improvement District (BID)
Managed by MPC, the Jerome-Gun Hill Business Improvement District (BID) gives support to over 200 businesses within its catchment area, which runs along Jerome Avenue between Mosholu Parkway and East Gun Hill Road and East Gun Hill Road between Jerome and Webster avenues. Small family-run operations and national chain stores alike rely on the BID for updates on regulations and guidance in dealing with borough and citywide agencies. The BID also collaborates with owners of vacant property, suggesting new businesses that would offer a needed service or product currently absent from the neighborhood, thus enriching the area’s retail mix.
Posted by 100PercentBronx at 8:50 PM 1 comment:

BOROUGH PRESIDENT DIAZ BRINGS 'PEACE IN OUR STREETS' TO SOUNDVIEW


State Senator Gustavo Rivera will be teaching a series of civic classes at the Bronx Library Center starting Thursday, October 13, 2011 at 6:00PM. This course is FREE TO THE PUBLIC and we encourage Bronxites of all ages to attend. The course will focus on learning about the Constitution and the Bill of Rights, the different levels of government, as well as how government and elections work. Senator Rivera’s civics course will start on  October 13th and will continue every Thursday until November 3rd with a graduation ceremony to celebrate the completion of the course.
We encourage that you attend all four classes, but it is not necessary in order to participate. As a college professor in Political Science, Senator Rivera is excited to be teaching his first community civics course in the 33rd Senate District.
FREE CIVICS CLASSES
Taught by Senator Rivera
Starting Thursday, October 13
6:00PM—8:00PM
Bronx Library Center
3101 E. Kingsbridge Rd.
Bronx, NY
Please register for the course by calling our office at 718-933-2034 and asking for Maryann Rosa. You can also email her at rosa@nysenate.gov.
Posted by 100PercentBronx at 8:52 AM No comments:

In advance of tonight’s meeting of the Panel for Educational Policy, Bronx Borough President Ruben Diaz Jr. is urging the Department of Education to strengthen its regulations on dating abuse prevention and intervention.
Specifically, Borough President Diaz is calling on the PEP to adopt many of the policies outlined through the “Start Strong Bronx” program. Launched in 2009, “Start Strong Bronx,” which is funded through the Robert Wood Johnson Foundation, is part of the largest ever national initiative targeting 11-to-14-year-olds to promote safe and healthy relationships and prevent teen dating violence and abuse.  Programming includes implementation of a healthy relationship curriculum, training of DOE leadership, principals and teachers and advocacy for system wide policy change.  Partners include Bronx Lebanon Hospital Center, the New York City Department of Education and Pregones Theater.
“The concepts outlined in ‘Start Strong Bronx’ are solid, and are proven to help reduce dating abuse among teenagers. The Department of Education should adopt these concepts, and I urge the Panel for Educational Policy to move forward on these recommendations,” said Borough President Diaz.
Borough President Diaz is urging the Department of Education to strengthen the Chancellor's Regulations A-831 and A-832 in the following ways:
·         Expand the definition of dating abuse in A-831 and add dating abuse as a prohibited behavior in A-832;
·         Mandate age-appropriate healthy relationship and dating abuse prevention education for all students;
·         Add a new dating abuse code to the OORS reporting system to track the number of dating abuse incidents. This change has no cost and can be implemented immediately;
"I think it would have been different if the teachers in my middle school understood dating violence and how to help others in need. If students learned about dating violence in school, I personally think that the number of people that are being bullied and treated badly in relationship would decrease,” said Xavier McGarrity, a member of the Start Strong Bronx Teen Advisory Board.
Posted by 100PercentBronx at 2:51 PM No comments: