It was a celebration of many things last night at the Eastwood Manor in the 12th City Council District. It was New Year's Day for 2016, it was the fifth anniversary of Andy and Neva King, it was the kick off of the re-election in 2017 for the Andy King for City Council campaign, and it was a visit to the Bronx by Mayor Bill de Blasio as well as Brooklyn Borough President Eric Adams a candidate for Mayor in 2021.
While Mayor de Blasio, Brooklyn Borough President Adams, Congressman Eliot Engel, City Council members Fernando Cabrera and Inez Dickens, Assembly members Keith Wright and Victor Pichardo, District Leader Jamal Bailey, and a few Bronx Young Democrats were on hand there was no Bronx Borough President Ruben Diaz Jr., no Bronx Democratic County Leader Marcos Crespo, or any other elected Bronx Democratic County official. Only the Executive Director of the Bronx Democratic County Committee Anthony Perez was in attendance, and he was very low key at that. It seemed that as I spoke to the attendees this was an independent minded group of about 400 people who came out to support an independent minded friend Councilman Andy King and his wife Neva Shillingford King. The photos below will tell the rest.

Above - District Leader Jamal Bailey (left) was the Master of Ceremonies for the event.
Below - Manhattan Democratic County Leader Assemblyman Keith Wright congratulates the Kings, and says by the way, he is running for the soon to be vacant Congressional seat of Congressman Charlie Rangel.

Above - Long time Congressman Eliot Engel shares his thoughts about his friend Councilman Andy King, and the fine job that Andy is doing.
Below - Brooklyn Borough President Eric Adams was on hand to say that he is not running for mayor in 2017, but is running in 2021 when the office will be vacant due to term limits that will also term limit him out of the borough president's office.

Above - The biggest surprise of the night was the appearance of Mayor Bill de Blasio as he is brought into the Ballroom by Councilman King.
Below - Mayor De Blasio sits with his friends Andy and Neva King as they celebrate their wedding anniversary with a prayer session.

Above - The mayor also took a photo with the members of the Bronx YEP, and then with many of the attendees before he left for another event that was on his schedule.
Below - After the mayor left the party shifted into high gear as Councilman King and his wife Neva led the dancing that lasted for hours.

Bronx MulchFest 2016
Saturday and Sunday, January 9 and 10, 2016
10:00 a.m. to 2:00 p.m.
Bring your holiday tree to a designated city park to be recycled into mulch that will nourish plantings across the city!
Join the New York City Department of Parks & Recreation, the New York City Department of Sanitation , andGreeNYC to recycle your Christmas trees into wood chips.
These wood chips are used to nourish trees and plants on streets and gardens citywide. Or, take home your very own bag of mulch to use in your backyard or to make a winter bed for a street tree .
More than 30,000 trees were recycled last year. Help us top this number!
How to 'Chip In.'
This year, MulchFest will take place on January 9 and 10, 2016. It’s easier than ever to chip in! There are two ways you can help.
Chipping Locations
You can bring your tree to a chipping location on January 9 and 10 from 10:00 a.m. to 2:00 p.m. We’ll chip your tree, and give you your very own bag of mulch!
Drop Off Locations
Or you can bring your tree to a drop-off site from Saturday, January 2 through Sunday, January 10. Leave your tree with us, and we’ll recycle it for you later! The NYC Department of Sanitation will also
be conducting special curbside collections for mulching and recycling of Christmas trees from Monday, January 4, 2016 through Friday, January 15, 2016.
What to Bring
Please remember to remove all lights, ornaments, and netting before bringing the tree to a MulchFest site. Bags will be provided if you wish to take some free mulch home. Mulch is available at the sites
marked with an asterisk (*) below.
MulchFest Locations

The Bronx
Posted by 100PercentBronx at 6:29 PM No comments:

Email ThisBlogThis!Share to TwitterShare to FacebookShare to Pinterest
Labels: MulchFest 2016 is almost here!

I  Welcome and Call to Order Adaline Walker-Santiago, Chair


It has been reported by the New York Times that 25 year 0ld Emanuel Lutchman has been arrested and charged with planning a New Year's Eve attack on diners in a Rochester restaurant on behalf of ISIS. He is accused of purchasing weapons as part of a plan to help ISIS bring terror to New York State, in the Rochester area.

Also in the Times story it is mentioned that a Rochester Pizza owner was arrested early in December for recruiting people and raising money for ISIS. Iy is not reported if the two arrests were connected, or if there was any connection to spreading any terror to New York City. The entire New York Times article with a photo of Emanuel Lutchman can be found HERE.

N. Y. Governor Andrew Cuomo has said in light of the Rochester arrest that New Yorkers need to be even more vigilant than ever. He also praised law enforcement at the state and federal level after the arrest of Mr. Lutchman. Cuomo added that every precaution is being taken to make this a safe and happy New Year.

You're Invited to attend A Community Interfaith Service 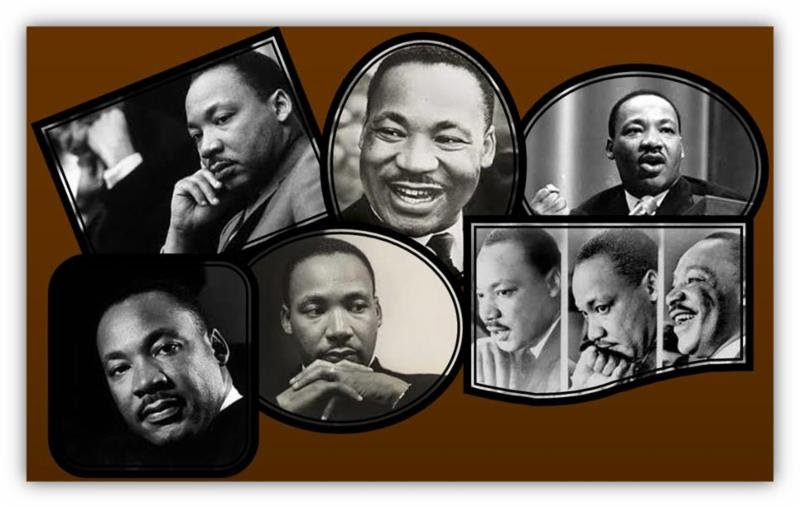 Email ThisBlogThis!Share to TwitterShare to FacebookShare to Pinterest
Labels: You're Invited to attend A Community Interfaith Service

Email ThisBlogThis!Share to TwitterShare to FacebookShare to Pinterest
Labels: Just 1 More Day to Give to the Friends in 2015

THE THREE KINGS IN THE BRONX 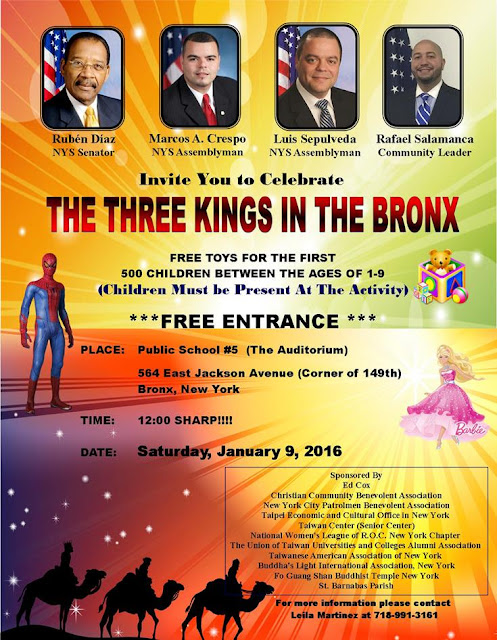 Email ThisBlogThis!Share to TwitterShare to FacebookShare to Pinterest
Labels: THE THREE KINGS IN THE BRONX

In efforts to legalize the use of hoverboards and electric unicycles in New York City, NY State Senator Jose Peralta (Queens), Assemblymember David I. Weprin (Queens) and NYC Council members Andy King (Bronx) and Ydanis Rodriguez (Manhattan) discussed legislation today that would exempt these devices from being define as “motor vehicles” under New York State law. Senator Peralta introduced a bill that would provide state and municipal authorities with the ability to create regulations regarding these popular devices. Councilmembers King and Rodriguez announced the introduction of a resolution in the City Council in support of the bill.

Under the proposal, these devices are no longer considered “electric personal mobility assistive devices.” In addition, state and municipal authorities would have the ability to create unique sets of regulations regarding hoverboards and electric unicycles. “This is a bill that tries to keep up with technology,” said Senator Peralta. “Because hoverborads and electric unicycles are not cars or motorbikes, my proposal removes these devices from what is considered a ‘motor vehicle’ under State law.”

Senator Peralta explained that nothing in his bill “constricts the ability of State or municipal governments to address operational or safety concerns relative to these devices; quite conversely, it allows these entities to address these issues outside of the blanket regulatory scheme that is applicable to motor vehicles and electric personal assistive mobility devices.”

According to reports, during Cyber Monday, about 7,500 hoverboards were sold nationwide, which means one on every 12 seconds.  Senator Peralta noted, “These are some of the hottest items on store shelves and the idea here is that if they are sold legally in New York, as they are now, you should also be able to ride them in New York.”

Senator Peralta’s bill would render the rule said to pertain to the use of hoverboards and electric unicycles in New York City obsolete, creating a separate categories for these devices.  Following the creation of these categories, State and municipal authorities would then have the power to act on safety and operational issues that are unique to the use of these technologies.

Assembly member Weprin stated “hoverboards have been one of the most popular holiday gifts this season, with many being sold in stores right here in the city. And although you won’t find me on one, New Yorkers of all ages should be able to enjoy their gifts without the threat of a $200-$500 fine. State law must keep up with technology and our bill does this for these new devices. This bill allows users to continue using these hoverboards while still providing state and municipal authorities with the ability to regulate the operation of these popular devices if necessary.”

“It is our aim to revise the traffic law to allow for the use of hover boards and electric unicycles in limited spaces, I am urging all my colleagues at the City Council and the Administration to sign onto my resolution, which would call upon the state legislature to pass Bill # S6260A, which would amend the vehicle and traffic law, in relation to exempting hoverboards and electric unicycles from the definition of 'motor vehicle' ", said Councilmember King.

“These so-called hoverboards have taken New York City by storm, already in use on our streets and in our parks by New Yorkers from all walks of life,” said Transportation Committee Chair Ydanis Rodriguez. “While I remain dubious about legalizing their use on streets and sidewalks, I believe there is a place for them to be used recreationally, in safe designated areas, without fear of a fine. Regulations should keep up with technology and I support Senator Peralta’s efforts toward this end. This bill will allow us in New York City to deliberate and find where these popular devices are most appropriate.”

“Hoodriderz and the community would like to thank Senator Peralta, Council member King and their teams for addressing the current legislation and bringing it up to date. We are excited for the legalization of personal transportation devices and believe that these fun modes of transport also have great potential to reduce pollution as adoption grows,” said Tim Haden, founder of Hoodriderz and hoverboard activist.

“The joint support of both Senator Peralta and Councilman King regarding the legalization of these balance boards aka hoverboards is proof positive that the current policy, making them illegal, is far overreaching and a definite target on the backs of minority youth who are the largest consumers of these modern skateboards,” said Tony Herbert, hoverboard activist.