On Friday, December 16, 2011, Bronx Borough President Ruben Diaz Jr., together with The New York Yankees hosted the 2011 Winter Wonderland celebration where five thousand kids received free toys. The children enjoyed hot chocolate and cookies and took pictures with Santa Claus and Mrs. Claus at Yankee Stadium.
The kips bay Boys and Girls club entertained those in attendance, and Ms. Jennifer Steinbrenner was on hand to represent the Yankee organization, along with Neil Friedman President of Toys R Us. Also on hand was Ms. Marlene Cintron of the Bronx Overall Economic Development Corporation as well as members of the borough presidents office who helped to put this together, and were on had to see the children as they received their presents. Comments from the children and parents included "it is very nice of the Yankees and Borough President Diaz to do this", "Great", "I hope they do this again next year", and only one child asked where are the players.
I was able to ask Ms. Steinbrenner if the Yankees would go all the way in 2012, and what new players might be added to the team. Her answer was "Yes we will go all the way next year, but I don't know what new additions to the team there will be as I am the last to know". 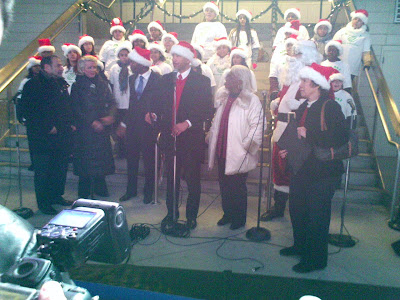 Front row Mr. Neil Friedman (of Toys R US) starts on the left next to Ms. Jennifer Steinbrenner, BP Ruben Diaz Jr., Deputy BP Greene, De Santa Claus partially blocked by Ms. Marlene Cintron of BOEDC. The children of the Kips Bay Boys and Girls Club are in the background.
Posted by 100PercentBronx at 1:49 PM No comments:

COMPTROLLER LIU WARNS EUROPEAN CONDITION COULD HURT CITY’S ECONOMY
State of the City’s Economy Report Outlines Risks to Mayor’s Budget Plan
City Comptroller John C. Liu today warned that the City economy faces extreme downside risks from the European debt crisis and has reduced his economic and tax revenue forecasts for Fiscal Year 2012.
The forecasts, part of the annual “State of the City’s Economy and Finances” report, also anticipate continued weakness in the national economy. Given the troubling outlook overall, the Mayor’s Budget Plan may face larger than expected gaps.
“Our office continues to closely monitor and evaluate risks to the City’s finances in these unsteady times.  Fiscal uncertainty will only increase given weaknesses in the national economy and overseas, which makes it more important than ever to be prepared for risks that we can identify ahead of time,” Comptroller Liu said.  “Mounting concern over the Euro zone remains a wildcard and our City’s potential exposure to a European collapse is significant.”
The City’s ties to Europe run deep. European banks have more than $1 trillion in assets in New York City offices, accounting for nearly two-thirds of all foreign bank assets in the City, according to Federal Reserve data. They also have extensive ties to other financial firms in the City, have thousands of employees here, and are active lenders in the City economy. Many of the City’s non-financial firms also have significant business relationships with European firms, and the City attracts millions of European business and leisure travelers each year.
In light of these widespread commercial interactions, adverse effects on the City’s economy from Europe’s debt crisis appear alarming and lend greater urgency to addressing existing budget issues.
JOBS AND HOUSING

While the City economy outperformed the national economy in 2011 – growing at an annualized rate of 1.9 percent in the first three quarters, compared with the national rate of 1.2 percent – both saw growth slow from the previous year.
Job growth also faltered. By October, the number of private payroll jobs in the City was only 20,300 above the level of the previous October.
Until job opportunities become more plentiful, the Comptroller does not expect significant improvement in the housing sector as young people delay establishing their own households and buying homes. New construction will continue to languish, and the nation’s economy will struggle to return to full prosperity. The chart below tracks the link between jobs and housing.
New Home Sales vs Unemployment Rates (Inverted), Seasonally Adjusted
January 1970 – October 2011

-- Source: Monthly Data from the U.S. Department of Labor and the U.S. Census Bureau.
RISKS TO THE CITY’S BUDGET
The Comptroller has been citing Europe’s sovereign debt problem as a risk to the City since his March 2010 report – and the problem has only intensified since then. It has escalated so severely that it must now be considered a material factor in the City’s economy. The Comptroller’s Office has lowered revenue forecasts on personal income taxes to $8.63 billion from $8.72 billion in July, and business taxes to $5.48 billion from $5.52 billion also in July.
As part of the report, the Comptroller outlined line-item risks to the Mayor’s November Budget Plan that would result in growing budget gaps:
Table 1.  Risks and Offsets to the November 2011 Financial Plan
($ in millions)

As the chart shows, these risks place the potential City deficit at $1.7 billion in Fiscal Year 2012.

Even as revenue forecasts have fallen, budget expenditures have risen since adoption. Overtime for the Police Department, Fire Department and Department of Corrections were underestimated – and the Comptroller’s Office believes they are still being underestimated in the Mayor’s Plan based on spending in previous years.

Another budget risk stems from the unsettled labor contracts for the United Federation of Teachers (UFT) and the Council of School Supervisors and Administrators (CSA). The Comptroller’s Office is concerned that the Mayor’s Plan relies on a collective bargaining strategy that has yet to materialize.
On the upside, record-low interest rates have allowed the City to refinance high interest rate bonds, saving taxpayers money. In Fiscal Year 2011, the Comptroller’s Office working with the City’s Office of Management and Budget executed refinancings that produced over $341 million in total gross savings over the life of the bonds for the City’s major credits.
“My office will continue to identify opportunities to lower the City’s borrowing cost whenever possible,” Liu said.

Comptroller Liu credited Deputy Comptroller for Budget and Accountancy Simcha Felder and his team for presenting the report, which can be viewed at: www.comptroller.nyc.gov
Posted by 100PercentBronx at 10:40 AM No comments:

On Thursday, December 15, 2011, Bronx Borough President Ruben Diaz Jr., joined Mayor Bloomberg, Deputy Mayors Linda Gibbs  and Cas Halloway, as well as Health Commissioner Thomas Farley  to announce that obesity rates among New York City public elementary and middle school students have decreased over the past five years across all race and ethnic groups, marking the biggest decline in childhood obesity reported to date by any large city in the country. The  event took place at P.S./I.S. 218 on Gerard Avenue. 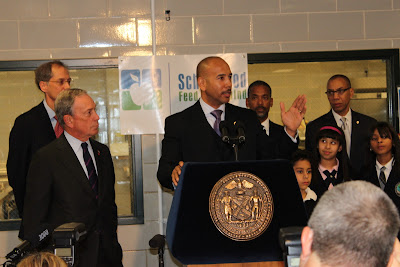 Yes that's Bronx Borough President Ruben Diaz Jr. and Mayor Bloomberg in the same photo together. Click on it to enlarge.

Yudelka Tapia (center in picture) Female District Leader of the 86th A.D. and her political club the Great Alliance Democratic Club held a holiday party last night to collect toys for needy Bronx children. Over 200 people were in attendance including pictured above City Comptroller John Liu, Bronx Democratic County Leader Assemblyman Carl Heastie, Bronx Borough President Ruben Diaz Jr., State Senator Gustavo Rivera, Councilman Fernando Cabrera, and many of the honorees and Great Alliance Democratic Club officers. Assemblywoman Vanessa Gibson (not in picture) also stopped by.
Ms. Tapia in an interview and while addressing the crowd said that she will not be running against 86th assemblyman Nelson Castro next year, or councilman Cabrera in 2013, but will help re-elect them. She said her long range goal is to look to the future, by bringing people together, build an even better club with more young people, and working to improve the community.
Posted by 100PercentBronx at 9:19 AM No comments:

This comes to us from www.livingwagenyc.org.
74% of New York voters are in favor of the living wage bill, according to new poll results out today from Quinnipiac University. The Living Wage NYC coalition responded with the following statement:
"Today's Quinnipiac Poll shows that New York City voters across the political spectrum support the living wage bill. Voters are taxpayers, and taxpayers want their money invested in the creation of good jobs. There is strong agreement among New Yorkers that city government should not continue to allow companies and developers that benefit from taxpayer subsidies to create poverty-wage jobs.
The vast majority of New Yorkers think the Fair Wages for New Yorkers Act is fiscally responsible legislation. 74% of those surveyed said it is the city’s responsibility to ensure that workers are paid a living wage. This sentiment reaches across political lines, as a whopping 56% of Republicans and 83% of Democrats agree that the Fair Wages for New Yorkers Act would benefit the city—results consistent with an earlier Baruch College living wage poll."


Voters polled by the Quinnipiac University Polling Institute said that the “Fair Wages for New Yorkers” Act, which is currently before the New York City Council, is a “good idea” by a wide margin of 74-19 percent.
“We know that the ‘Fair Wages for New Yorkers’ Act is a popular bill, and this poll articulates the tremendous magnitude of that support,” said Bronx Borough President Ruben Diaz Jr. “New York City residents from all walks of life have made their voices heard: when heavy taxpayers subsidies are solicited by major development, those same developers must do better by their employees.”
The “Fair Wages for New Yorkers” Act, which was introduced into the City Council at the behest of Borough President Diaz, would require developers that receive heavy taxpayer subsidies to pay their employees a “living wage,” currently defined by federal law as $10 per hour plus benefits or $11.50 per hour without. The bill, which was introduced by Council Members Annabel Palma and G. Oliver Koppell on behalf of the borough president, currently has 29 City Council co-sponsors.
The poll also found support strong for the bill across the political spectrum, with support for the bill among Republicans at 56-39 percent, among Democrats at 83-11 percent and among independents at 67-25 percent.
Voters polled also said that it is the government's responsibility to make sure workers are paid a decent wage by a margin of 81-17 percent, including 60 - 39 percent among Republicans. Those polled also rejected the idea that the “Fair Wages for New Yorkers” Act would cost New York City jobs by a margin of 56-36 percent. The “living wage” proposal also enjoys the support of voters in all five boroughs, according to the poll.
This is the second time that a poll has shown major support for both the “Fair Wages for New Yorkers” Act and the concept of a “living wage.” In May, a poll by Baruch College Survey Research was released, showing that New Yorkers overwhelmingly support such “living wage” laws. That survey showed that 78 percent of New Yorkers agree with requiring employers that get taxpayer-funded city subsidies to pay $10-an-hour plus benefits, while just 15 percent do not. This includes 83 percent of all Democrats, 74 percent of independents, and 56 percent of Republicans.
“The people of New York City have made it clear, again and again, not only that they support a ‘living wage’ law, but that they reject the arguments put forward by our opponents that this bill will hurt business. The ‘Fair Wages for New Yorkers’ Act makes sense for our City, and it is time for this bill to be made law,” said Borough President Diaz.
A full copy of the Quinnipiac Poll can be found at:
http://www.quinnipiac.edu/x1302.xml?ReleaseID=1680
Posted by 100PercentBronx at 4:21 PM No comments:

January agenda to be  posted.