The Bronx Tourism Council - Spring is only a few weeks away... 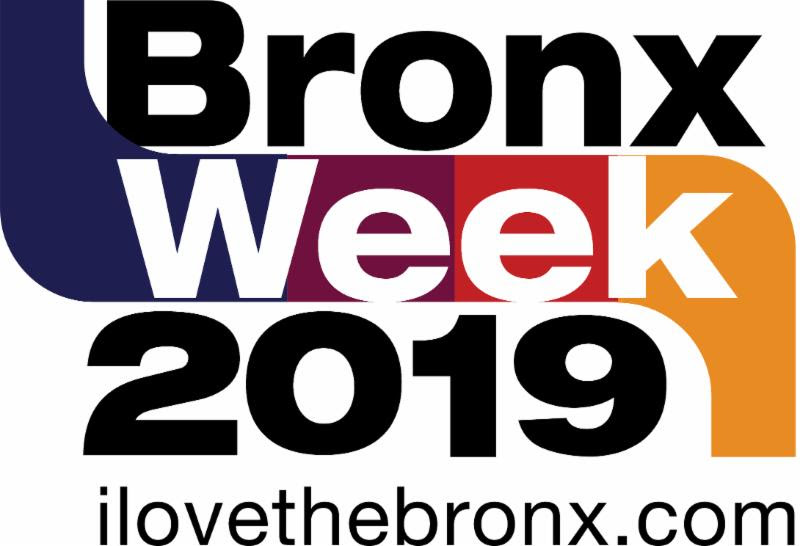 Email ThisBlogThis!Share to TwitterShare to FacebookShare to Pinterest
Labels: The Bronx Tourism Council - Spring is only a few weeks away...

Experts from the private, public, and nonprofit sectors are supporting the expansion of New York City’s blueprint to build a strong and fair city

Mayor Bill de Blasio today announced his appointments to an advisory board that will support the process of creating a new One New York: The Plan for a Strong and Just City (OneNYC) by April 2019. Originally released in 2015 as the world’s first resilience strategy and a model for sustainable development, OneNYC provided a blueprint for tackling New York City’s most significant challenges. The new OneNYC strategy will continue to evolve to address the changing nature of challenges that confront our city.

“OneNYC provides a comprehensive blueprint to build a more resilient and just city, showing us the value of setting a bold vision to improve the lives of New Yorkers.  With the support of the experts on the OneNYC advisory board, we will go even further,” said Mayor de Blasio. “We’re excited to have such a talented and diverse group of experts contributing to the development of our new OneNYC blueprint, and help build a fairer city for all.”

“OneNYC has demonstrated the necessity of addressing the challenges of the 21st century head on. As New York City looks toward the future, we’re committed to bringing together the brightest minds to support our work,” said Daniel Zarrilli, OneNYC Director and NYC’s Chief Climate Policy Advisor. “With the advisory board’s help, the City will produce a new long-term strategic plan that will help to create a more resilient and inclusive city.”

The 39-person board is comprised of experts from a wide variety of disciplines, including civic leaders, businesspeople, academics, and community leaders. Several board members who advised the city on the original 2015 OneNYC strategy will be returning to offer their expertise for 2019. The advisory board will help craft New York City’s long-term strategy for tackling 21st-century challenges such as population growth,  aging infrastructure, stubborn inequality, an evolving economy, climate change, and other emerging risks.

As part of the OneNYC update, the City is also engaging in a campaign to solicit feedback from the public and a diverse set of stakeholders. As part of this engagement campaign, the de Blasio administration is holding events and meetings with civic associations, advocacy groups, business groups, youth and senior organizations, and local elected officials in all five boroughs and has developed an online survey where all New Yorkers can make their voices heard. To date, over 13,000 New Yorkers have responded.  To access the online survey, please visitnyc.gov/OneNYCsurvey.

The OneNYC Advisory Board members include:

Bronx Borough President Ruben Diaz Jr.
Invites you to join him at his annual

To confirm your attendance call 718-590-3989 or email smalave@bronxbp.nyc.gov

On Thursday, February 28, 2019, Bronx Borough President Ruben Diaz Jr. hosted his annual Dominican Heritage Month celebration at the Beverly Hills Manor on Jerome Avenue, honoring individuals who have contributed to the growth and promotion of Dominican and Dominican-American community and culture.

“The Dominican Republic is a land of hard-working people, excelling in different walks of life and business. A great number of prominent Dominican Americans right here in The Bronx are setting examples and paving the way for other Dominicans in New York City by working hard towards their goals,” said Bronx Borough President Ruben Diaz Jr.

“I welcome Comptroller Scott Stringer’s “hard look” at ThriveNYC. Experts in behavioral health and health policy professionals have recognized Thrive as the most comprehensive mental health plan of any city in the nation. There is far too little understanding out there about mental health conditions and treatments. It is my hope that this examination will encourage elected officials like the Comptroller to take our Mental Health First Aid course and take time to learn more about this area of health that has been so sorely neglected. Perhaps now we can go beyond political posturing and lip service, and have the kind of public conversation our city must have to promote the mental health of our children and families.”

ThriveNYC has been recognized by various organizations, including the International City and Urban Regional Collaborative (I-CIRCLE), as a model approach that uses best practices and public health concepts to address mental health.

Rating now equal to New York State, a rarity for the State’s municipalities

For the first time since 2007, Moody’s Investors Service has upgraded the City of New York’s General Obligation Bond credit rating. The rating was upgraded from Aa2 to Aa1, their second highest rating and equivalent to New York State’s Aa1 rating, which is significant because a local government is rarely rated as high as its home state. The Aa1 rating is the highest Moody’s credit rating the City has ever received.

Moody’s increased the City’s rating due to its increased economic diversity and decreased reliance on revenue from Wall St., its highly skilled workforce, first-class education and medical centers and low crime rates, among other factors. The upgrade is attributable to the City’s ongoing strong financial management – including the highest level of reserves the city has ever seen, affording it greater flexibility to respond to the next economic downturn.

“For the last five years, we’ve used the City’s budget to improve the lives of New Yorkers,” said Mayor Bill de Blasio. “Moody’s credit rating is validation of what we’ve always known: that you can be both a progressive and a strong fiscal manager.”

The City expects the upgraded rating to lower debt service costs, enabling it to more efficiently borrow and finance its capital projects, such as maintaining the city’s infrastructure.

In January, Mayor de Blasio announced his $92.2 Preliminary Budget for FY2020, a balanced budget that continues to fund critical services for New Yorkers and promotes fairness across New York City while also demonstrating fiscal responsibility. In addition to expanding programs such as 3-K for All, the Mayor called for $750 million in mandatory savings which will be achieved in part by deepening the City’s Partial Hiring Freeze and implementing the Administration’s first Program to Eliminate the Gap.
Posted by 100PercentBronx at 8:17 PM No comments:

“I am thrilled with Moody’s vote of confidence in New York City’s economy. A higher bond rating means lower borrowing costs for the City, which means additional resources to help fund our city schools, parks and other critical services, as well as more money to help us weather whatever economic challenges may come our way. That said, maintaining the city’s fiscal strength is a full-time job, so while we celebrate today’s good news, we at the Comptroller’s Office remain doubly committed to continuing our progress through careful oversight of the city’s budget and economy.”

Agency Watch List reveals lack of accountability and results despite record spending at the Department of Correction, Department of Buildings, and multi-agency spending on homeless services 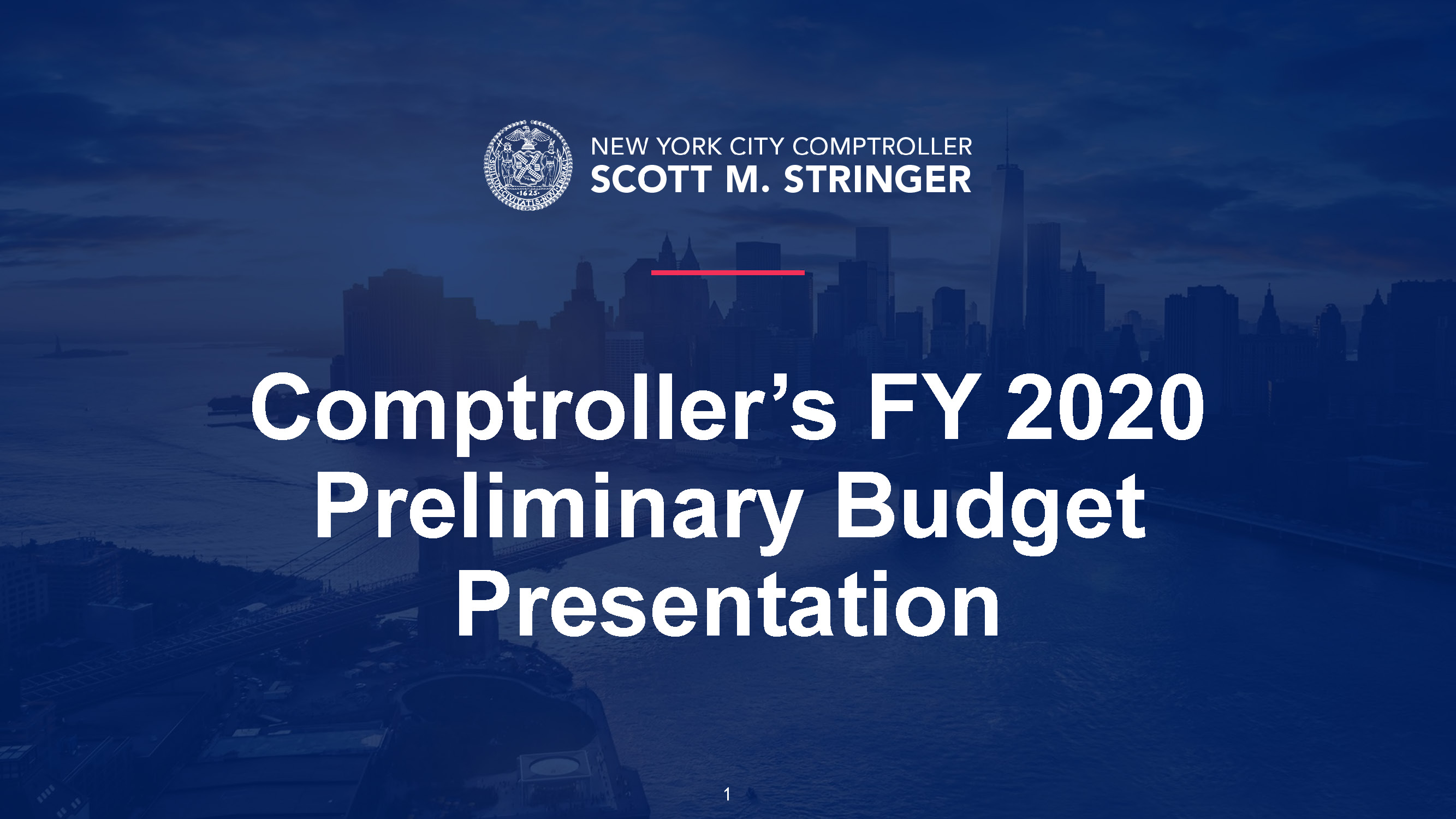 New York City Comptroller Scott M. Stringer delivered his annual analysis of New York City’s Preliminary Fiscal Year 2020 budget which revealed a lack of financial preparedness for potential future economic uncertainty, and an absence of tangible results despite increased record spending at three City agencies.  Comptroller Stringer’s analysis found the proposed FY 2020 budget relies on numerous one-time actions to balance the budget and called for a goal of increasing the City’s budget cushion to 15% of total spending to sufficiently prepare the City for unforeseen events and protect programs that lift up New Yorkers.  Additionally, the Comptroller’s Agency Watch List –  which spotlights city departments without demonstrable results for their spending –  revealed record multi-agency spending on homeless services, which is projected to reach nearly $3 billion even as the shelter population continues to rise.  Meanwhile, the Department of Correction is spending over $300,000 per detainee as incidents of violence increase.  New for this year, Comptroller Stringer added the Department of Buildings to his Agency Watch List due to a 252% increase in construction accidents since FY 2014, despite increasing spending by 62% over the same period.
“The City’s budget is a statement about our values, it’s our opportunity each year to consider how we are serving working families and promoting policies that will empower all New Yorkers.  While there are some critical initiatives included in the FY 2020 budget, we must be doing more to reach a balanced, sustainable budget and ensure that city agencies are accountable for the public money they spend,” said Comptroller Stringer.  “Our budget needs to be balanced for the long term, not just for the next year, so that we can ensure that vital initiatives and services for families and seniors go uninterrupted regardless of the broader economy.  To reach that goal we need to build up our budget cushion and conduct a more rigorous review of agency spending to root out inefficiencies and waste.”
The Comptroller’s wide-ranging presentation covered several aspects of the City Preliminary Budget and the state of the City’s economy, including:
Overview of the FY 2020 Preliminary Budget
The Economic Outlook is Clouded with Risk
City Must Manage the Budget More Aggressively to Address the Growing Risks
Posted by 100PercentBronx at 8:14 PM No comments: