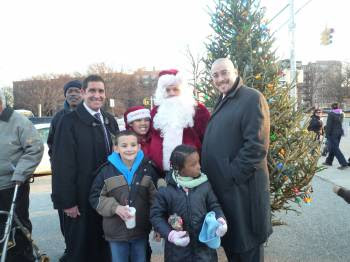 Senator Klein, and Senator Elect Gustavo Rivera pose for picture with Santa on Pelham Parkway.
Posted by 100PercentBronx at 7:43 PM No comments:

Email ThisBlogThis!Share to TwitterShare to FacebookShare to Pinterest
JOEL BONDY SUSPENDED, LIU HALTS ALL PAYMENTS TO SPHERION Re City Time

Borough President Ruben Diaz Jr. will be appearing on NY1’s “Inside City Hall” this evening.  The show airs at 7 p.m. and 10 p.m. on Cablevision  channel 1.

The LRA, which is made up of Borough President Diaz as well as two deputy mayors to Mayor Michael Bloomberg, had put forth a proposal to use the MARC to house a 200-unit homeless shelter for single men, despite widespread opposition to the plan and a glut of new and existing homeless shelters in Community Board #12, a number of which are planned for the area immediately adjacent to the MARC.

Rather than a homeless shelter, Bronxites have for years asked that the National Guard units that currently occupy space outside of the Kingsbridge Armory be moved to the MARC, freeing up their current space for use as potential public schools. Since the MARC is already used by the military, transferring a different military unit would be an easy, inexpensive way to reuse the MARC. Instead, the Bloomberg administration has chosen to undergo a costly renovation of the MARC for use as a homeless shelter.

“We understand that we must help the least fortunate among us. With that said, Community Board #12 is already doing its fair share for the homeless. Adding another shelter to this community is wrong, especially when a viable alternative use for the MARC is on the table. It is shameful that this administration has ignored  the collective voice of the Bronx and pushed forward with this homeless shelter plan," said Bronx Borough President Ruben Diaz Jr.

Email ThisBlogThis!Share to TwitterShare to FacebookShare to Pinterest
Elevation of Judge Edgar Walker to Justice of the Supreme Court

Also in the picture are 81st A.D. District Leaders Bruce Feld and Randi Martos, along with Bruce Weitz chief of staff for Congressman Engel, and new Supreme Court Judge Edgar Walker..
Posted by 100PercentBronx at 5:02 PM No comments:

NEW  Pedro Esapda charged with fraud and embezzlement of $500,000.00 from the Soundview Medical Center. His son has also been incited on similar charges it is reported. Both could face up to ten years in jail on these counts alone.
We have just heard word that the US attorney will indict current State Senator Pedro Espada on five counts.
We will have the details as they are announced.
Posted by 100PercentBronx at 5:18 PM No comments:


On Sunday, December 12, Bronx Borough President Ruben Diaz Jr. and The Bronx Tourism Council gave food enthusiasts the chance to taste the best of the Bronx cuisine. Residents who purchased tickets to the production of “A Bronx Messiah” by Handel at the Lehman Center for the Performing Arts, received free admission to “A Taste of The Bronx” Food Show, an event created to draw attention and business to the borough’s array of fine restaurants.
"With a record number of Bronx restaurants being recognized by publications like Zagat Survey and the Michelin Guide, it's an especially good time to celebrate some of the best eateries in our borough.  Our residents don’t have to go far to enjoy a good meal, The Bronx is full of excellent restaurants,” said Bronx Borough President Ruben Diaz Jr.

BP Diaz getting the first tasting of the food on display.
Posted by 100PercentBronx at 2:08 PM No comments:

Kudos to Ms. Joanna Molloy from the New York Daily News for her sharp warning to us in Saturday’s column, New Yorkers rip Bloomberg on crash tax, say he's 'bleeding the middle class' dry.
Her comparison of Mayor Bloomberg’s intention to allow the FDNY to bill drivers involved in accidents to the Emperor Nero’s tax on urine collectors may sound grotesque.  According to history, Nero’s son complained about the gross nature of that tax.  A gold coin was held high before him and a voice of authority stated: “This doesn’t stink.”
Well, my friends, if we hold Mayor Bloomberg’s plan up to the light, it does stink.
It stinks that people who need help may not call for help.
It stinks that anyone injured in a car accident where the car goes on fire would have to worry if he or she has an extra $415 in the bank before calling the FDNY for help.
It stinks that under-privileged New Yorkers could decide to leave the scene of an accident just to avoid paying a $490 ‘crash’ tax.
It stinks that the number of hit and runs could go up.
It stinks that taxi drivers and truck drivers would have new worries added to their already difficult lives.
It stinks that fender benders where the drivers (thankfully) have no injuries and are reported by a third party could cost drivers $365 for the ambulance that shows up.
It stinks that needy New Yorkers may vow to never call 911 again even in the case of medical emergency because of this preposterous plan.
The men and women who work in New York’s firehouses, drive emergency vehicles and respond to accidents are our heroes and heroines.
It stinks to think that Mayor Michael Bloomberg could exploit the relationship between New York’s Bravest and New York residents by sending a bill from the FDNY to accident victims.
It stinks that our Mayor or anyone could even think of pitting emergency care workers – our heroes and heroines – against the public.
Back to Ms. Molloy’s reference to Nero … we’ve all heard the expression: “Nero fiddled while Rome burned.”
Let’s hope that Mayor Michael Bloomberg does not take up the fiddle anytime soon.
[http://rubendiaz.com/itstinks.html]
Posted by 100PercentBronx at 7:23 PM No comments: