Friday afternoon's temperature broke the record for July 22nd. In Central Park the temperature hit a new record of 104 degrees, while in Newark New Jersey it hit 108. High temperatures will continue through the next day or two, as the beginning of next week looks like it will cool down returning to the mid 80's during the day.
Posted by 100PercentBronx at 4:56 PM No comments:


Last night Derek Jeter got hit #3010 a double which now ties Jeter with Wade Boggs for 25th position on the all time hit list. Should Jeter get a hit in today's game he would then tie Cap Anson for 24th position with 3011 hits. Next up would be Rafael Palmerio in 23rd position with 3020 hits.
Posted by 100PercentBronx at 2:43 PM No comments:

Jay Walder Head of the MTA to Leave For Asian Job


MTA boss Jay Walder will be leaving the MTA as of October 21st to become the COE of the MTR Coproration of Honk Kong. MTR is a publicly traded company that runs rail lines in Asia and Europe, as well as consulting and property management.
Walder became the head of the MTA back in late 2009, as revenues began to decrease. Layoffs, service cuts, and fare hikes then went into effect, and some MTA board members were not reappointed by Governor Andrew Cuomo.
There has been no announcement as to just who will take over as MTA boss when Walder leaves.
Posted by 100PercentBronx at 4:02 PM No comments:

Email ThisBlogThis!Share to TwitterShare to FacebookShare to Pinterest
BOROUGH PRESIDENT DIAZ ANNOUNCES CLOSE TO $13 MILLION
IN FUNDING FOR BRONX ORGANIZATIONS


Bronx Borough President Ruben Diaz Jr. announced today that his office has allocated $12.85 million in funding for projects across the Bronx as part of his FY2012 budget requests.
This funding will help move projects forward in every corner of the Bronx, contributing to new technology in schools, new housing opportunities and a greener Bronx.
“The capital funding provided by my office is critical in moving important projects forward, and that is especially true in tough economic times. These funds will help bring technology to our schools, build new housing and make the borough a greener place,” said Bronx Borough President Ruben Diaz Jr.
For the third consecutive year education represents the largest percentage of Borough President Diaz’s capital allocations, 30 percent, placing the total funding amount at just over $3.86 million. Thirty eight education projects were funded by the borough president this year, including a new green roof at the forthcoming Highbridge Middle School, auditorium upgrades at M.S. 145 in Melrose and a library renovation at the Soundview Academy for Culture & Scholarship.
Also funded was a unique initiative by Mercy College to create a “Parent Resource Center” at the college, focused on family and leadership development in our public schools.  This initiative will also create two parent centers at P.S. 46 and P.S. 85, both in the northwest Bronx, to provide outreach within the community.
“Our public schools are not only important to the lives of the students within them, but to the surrounding communities they serve as well. As this budget shows, my office has and will continue to make capital improvements to our schools one of our highest budget priorities,” said Borough President Diaz.
Borough President Diaz also provided just over $3.81 million in funding to various housing projects across the borough, including $839,000 towards the development of mixed-income housing at Webster Commons in Norwood, as well as $500,000 to rehabilitate two distressed buildings in West Farms through Exact Capital.
In addition to education and housing, Borough President Diaz provided funding to a variety of other Bronx institutions, including healthcare providers, cultural affairs organizations, parks and libraries. Projects funded include gym renovations at the Madison Square Boys & Girls Club in Crotona Park East, an expansion of Van Nest Park, upgrades to the Grand Concourse Branch Library and new ultrasound equipment at Lincoln Hospital.
Posted by 100PercentBronx at 3:45 PM No comments:


It appears that some City Council members have racked up huge debts since the 2009 filings.
According to Celeste Katz of the Daily News, she reports that Brooklyn Councilman Michael Nelson owes $102,000 on four credit cards. Nelsons wife died of cancer in 2008, and he said he put all the bills on his credit cards that will take years to pay off.
Brooklyn Councilman Jumaane Williams owes from $35,000 to $308,000 on seven credit cards Ms. Katz reports. That's up from the $20,000 in 2009, and is attributed to a restaurant ownership.
Brooklyn Councilman Vincent Gentile owed $165,000 in 2009 which has risen to $309,000 last year. There was no reason as Councilman Gentile was unable to be contacted.
Bronx Councilman G. Oliver Koppell is reported as saying that he owes $160,000 on three credit cards he uses to support his law practice. Koppell is also quoted as saying that he gets offers for zero percent, and it's to good to pass up.
You can read the entire article here at this link  .
Posted by 100PercentBronx at 4:19 PM No comments:

Bainbridge Ave. & E. 204th Street Merchants Present Summer Streets Weekend Walks 2011
On Sundays, July 24, 2011, July 31, and August 7, from 12-5PM, The Bainbridge Avenue & E. 204th Street Merchants group in conjunction with Bronx Community Board 7 and Mosholu Preservation Corporation will participate in the Department of Transportation (DOT)-sponsored “Temporary Pedestrian Street/Summer Street” program along East 204th Street between Bainbridge and Hull Avenues.
The intent of the program is to create a recurring, multi-block, pedestrian street to promote local businesses and organizations. The purpose of these events is to help stimulate the local neighborhood economy and bring community residents together.
The events will feature various activities such as merchants who’s storefronts will be extended to curbside for a unique outdoor shopping experience, face painting, FDNY Smoke House, a farmers market, cooking demos by Just Food, games, entertainment and giveaways.
For mor information contact:
Fernando Tirado, CB 7, District Manager
T. (718) 933-5650
E. info@bronxcb7.info
Posted by 100PercentBronx at 3:27 PM No comments:


Last night Derek Jeter got a single in the top of the 9th inning for hit # 3008 passing Al Kaline for 26th position on the all time hit list. Next up for Jeter is Wade Boggs at 3010 hits. At his current pace Jeter should finish this season with about 3,058 hits which would place Jeter close to Craig Biggio who is in 19th place with 3,060 hits.
Posted by 100PercentBronx at 10:41 AM No comments:

Senator Jeffrey D. Klein, (D-Bronx/ Westchester), and New York City School Chancellor Dennis Walcott were joined by parents, community leaders, educators, and healthcare professionals to unveil a multi-pronged plan to fight asthma in the Bronx.
Asthma is the most common chronic disorder in children and, in recent years, has become the leading cause of hospitalization among children in New York. The Bronx has one of the highest asthma rates in the country, with an asthma hospitalization rate that is 70 percent higher than the rest of the city and 700 percent higher than the rest of New York State. Educators have also found asthma to be a major cause for chronic absenteeism in New York City schools.
“This affliction has not only taken our children's health hostage, it is holding their education for ransom,” Senator Klein said. “What we have developed is a comprehensive strategy to detect local environmental triggers that cause asthma attacks, educate parents, and keep kids in the classroom.”
"When a student is sick, they either miss class or struggle to learn,” Chancellor Walcott said. “We need to do everything we can to make sure students attend school so that by their senior year they will be prepared for college and career. The NYC Asthma Friendly Schools Campaign was launched to help reduce asthma-related absences and improve asthma awareness, prevention and management.
At Senator Klein's urging, the state Department of Environmental Conservation this past weekend deployed air monitors for the first time ever in North Eastern Bronx. Four separate thoroughfares – Interstate 495/295, the Cross Bronx Expressway, the Hutchinson River Parkway, and the Bruckner Expressway – run through this area, while two near-by bridges – the Whitestone and the Throggs Neck – are used by more than 40 million motorists each year. Senator Klein and Community Board #10 worked with the DEC to have temporary air monitors placed at the Locust Point Civic Association and the Throggs Neck Houses.
Chancellor Walcott recently announced a new citywide campaign to reduce asthma-related absenteeism in schools. Roughly 17 percent of students have been diagnosed with asthma.
The program includes:
Expansion of the American Lung Association's (ALA) Open Airways Program For Schools:
Parent Summits at Schools with High Asthma Rates:
Provide New Training to Physical Education Teachers in Management and Prevention of Asthma among Students.
Family Shelters to Receive New Asthma Prevention and School Attendance Training:
Senator Klein has introduced new comprehensive legislation to fight the spread of asthma and help reduce the skyrocketing healthcare costs associated with asthma related treatment.
Which includes
Senator Klein will also be sponsoring a training session at the Locust Point Civic Association July 27, from 6 p.m. to 8:00 p.m that will help community groups apply for state environmental justice grants, which are offered by the state Department of Environmental Conservation, that can be used for asthma-fighting efforts in their neighborhoods. 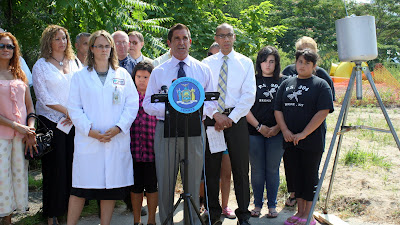 Senator Klein, Chancellor Walcott, stand with  parents, community leaders, educators, and healthcare professionals to unveil a multi-pronged plan to fight asthma in the Bronx at the Locust Point Civic Association. If you look to the far right, you will see one of the DEC air monitors that has been placed in North Eastern Bronx.
Posted by 100PercentBronx at 4:22 PM No comments:

That was the headline in today's Daily News as they reported that Congressman Eliot Engel and an his business partner Harry Bajraktan have ignored six requests to inspect the building they are reported to own located at 1142 Metcalf Avenue here in the Bronx.

The story goes on to quoting Engel's partner saying it was the problem of a tenant that he was trying to evict.

You can read the entire Daily News story HERE  .

Bronxites participated in a Healthy Cooking Demonstration, Spoke to Nutritionists
“ There are several factors as to why the Bronx is the unhealthiest county, including less healthy options than other boroughs, but we can take ownership of our personal health habits and behaviors,” said Senator Gustavo Rivera. “I live in the same community and walk by the same fried chicken spots and pizza parlors, but I have made a commitment to lead a healthier life and to help educate my neighbors about the importance of developing healthy habits that will last a lifetime.”
Senator Gustavo Rivera (D, Bronx) on, Saturday, July 16th, 2011, hosted the first Bronx CAN Health Initiative Check-In focused on nutrition and healthy eating habits at the Kingsbridge Heights Community Center. At the kick-off of the Bronx CAN Health Initiative in June, Senator Rivera committed to losing 20 pounds by October 24th, the last day of the Bronx CAN Health Initiative. Today, he weighed in at 293 lbs. down six pounds from 299 lbs in June.
“I want to thank Senator Gustavo Rivera for asking me to participate in the Bronx CAN Health Challenge,” said Kenny Agosto, District Leader in District 80 and Bronx CAN Health Challenge participant. “I know I didn’t gain all this weight overnight and that I won’t lose it all overnight, but with Senator Rivera’s help I am getting on track to having a healthy lifestyle and have already lost ten pounds.
The event included a healthy cooking demonstration from the Nutrition and Health Program Cornell University Cooperative as well as the opportunity for Bronx CAN Health participants to sit down with nutritionists to discuss how to make healthier choices in their daily lives. Participants also received free healthy recipes cookbooks and Green Bucks coupons for NYC Green Carts.
Posted by 100PercentBronx at 4:28 PM No comments: