On Saturday - January 14th , the Perez family-owned C-Town Supermarket along with the help of Health Plus, distributed over 100 coats to Bronx neighborhood residents. The C-Town store on East 187th Street & Crescent Avenue, is owned by Radame Perez, who represents the third generation in his family’s grocery business, expressed the importance of such an event during these tough economic times.  “It’s very important that we as a community look out and care for each other,” said Mr. Perez.  “While unemployment seems to be on the rise, our winter temperatures are on the decline.  That’s why we felt, as a family-owned business and longtime neighbor, the need to help as many of our neighbors as possible to keep warm this winter.”
The Perez’s C-Town supermarket has been an active neighborhood store in the heart of the Belmont section of the Bronx and has proudly served the residents of “Little Italy” for over 30 years.
“Partnering with Health Plus in this public gesture of giving seemed obvious, as the effects of the bone-chilling cold weather and subsequent health conditions too often correlate,” said Mr. Perez.  “This type of effort was the least we could do for many of our patrons.” Also dropping by to help give out the much needed coats on the coldest day of the year was City Comptroller John Liu. 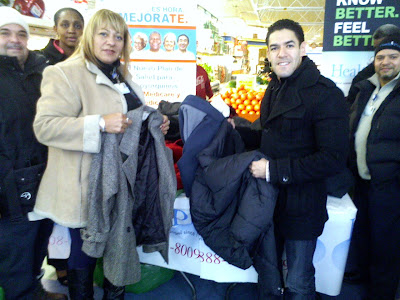 C-Town owner Radame Perez and a Health Plus associate stand in front of some of the many coats that were given away. Below City Comptroller Liu helps a family try on the coats given to them. 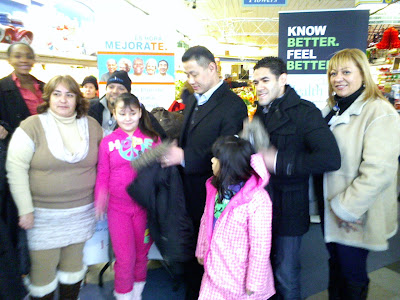 It appears that the stalemate in the City Council over the Living Wage Bill is over as a very watered down version of the original bill announced today.

The original bill had a $10.00 minimum plus benefits or $11.50 pay structure for all employees of a city subsidized development.

The compromise legislation would set that pay scale for only employees of a company that receives the subsidiary directly from the city.

Here are a few comments on the deal.

Stuart Appelbaum, President of the Retail, Wholesale and Department Store Union (RWDSU, UFCW)-
I want to thank Speaker Quinn for bringing us together today for this important announcement. She has shown tremendous leadership and courage, and I am deeply grateful to her and her staff for everything they have done to get us to this point. And we would not be here without the leadership and vision of Borough President Ruben Diaz and council members Annabel Palma and Oliver Koppell. The RWDSU and all of our partners have been proud to be part of a diverse coalition fighting for living wages. And today I am so very proud to say that we have taken an important step in that fight.   Together with the faith community, unions, immigrants’ rights organizations, LGBTQ groups, women’s groups, anti-hunger groups, civil rights leaders, and many others we built a strong movement for economic justice – a movement that today can celebrate a real victory for working people in this city.

Our campaign was called Living Wage NYC for a reason, and we have achieved a key goal: a new policy framework that says all workers on subsidized development projects, including retail employees, should be paid a living wage.  A living wage requirement will extend to all direct recipients of subsidies for the first time in New York City.  This is a groundbreaking requirement that covers the largest economic development program in the country. And we’re going even further: the city will establish a new pilot program fund to incentivize the creation of more living wage retail jobs on city development projects.  We will show once and for all what we have believed for a long time - that this is smart policy that can work.  All in all, this is an unparalleled effort to raise standards for job creation, and we should all be proud of that. We know that there is much left to do to address income inequality, job creation and job quality in this city.  But we have raised the bar on what government can do and we will continue to work with all our allies to address the very real concerns of working people and the unemployed.  There is no question that the living wage movement has changed the conversation about job creation in this city.

We have highlighted the importance of a higher-wage economy that will reduce inequality and rebuild the middle class.  But the sad reality is that we have gained such visibility and momentum because so many people simply aren’t earning enough to support themselves and their families.  We today stand with Speaker Quinn and say New York City is ready to do something about it.  We should all understand that this new policy framework we are announcing today goes further than what any city in the country has done. And I know it’s something we will build upon in the future. And rest assured that this victory here in New York City will have national implications for other cities and for the progressive movement and labor movement in this country.  And I can’t help but noting how fitting that we are here on the Friday before Martin Luther King Day.  Dr. King died in Memphis while he was fighting for living wage jobs.  The core issue affecting many workers today is the issue that animated King in his final hours: economic security is a crucial component of a truly just society.  Today all of us are honoring his moral legacy through this landmark living wage effort.  The dream is alive and we will continue our struggle to reach the mountaintop.
Bronx Borough President Ruben Diaz Jr.
“I am extremely happy that we have reached an agreement on the ‘Fair Wages for New Yorkers’ Act, and that this important bill will finally see a vote in the City Council. The deal we have reached today creates the strongest ‘living wage’ legislation in the nation, one that will demand that direct recipients of significant taxpayer subsidies do better by their employees. This will guarantee that happens, and marks an important step forward on the economic development policy in the City of New York. This bill sends an important message to the business community.  Indeed, New York City is open for business, but at a better rate of return for the taxpayer.
“I would like to thank Speaker Quinn for working closely with my office on this compromise. I would also like to thank City Council members G. Oliver Koppell and Annabel Palma, all of our City Council co-sponsors, RWDSU and Stuart Appelbaum, and the entire Living Wage NYC coalition—which brought together clergy and community leaders from across the City—for their strong advocacy on this legislation.”
City Comptroller John Liu
“This living wage agreement will ensure better use of public subsidies for private business and help reverse the widening wealth gap in our City. The City Council and the Living Wage Coalition are to be commended for their tenacious effort in getting this accomplished.”
Posted by 100PercentBronx at 5:10 PM No comments:

Email ThisBlogThis!Share to TwitterShare to FacebookShare to Pinterest
On Thursday January 12th Mayor Mike Bloomberg Gave His "State of The City" Address.
Below are sime comments from some of our elected officials.
Many others wanted to know why the speech was mainly teacher bashing
Check next weeks Bronx News for my take on the mayor's speech.
STATEMENT FROM BOROUGH PRESIDENT DIAZ
“I applaud Mayor Bloomberg for articulating an expansive and progressive vision for New York City in today’s speech. Mayor Bloomberg focused on education, job growth, public safety, and other issues that have been high priorities for my administration.
“The mayor presented several interesting ideas and initiatives that will improve the lives of all New Yorkers; including the highly anticipated release of a new request for proposals (RFP) for the Kingsbridge Armory, improving services to NYCHA’s residents and preserving public housing, and the redevelopment of the Hunts Point Produce Market. I thank Mayor Bloomberg and the city council for adding another $25 million to what will now be the city’s $87 million commitment to re-building the Hunts Points Produce Market and making sure those jobs stay right here in the Bronx.
“I also believe the state must do its part in passing the Dream Act. Investing in the dreams of our immigrant youth is not only the moral thing to do, it is a social, academic and economic imperative. I believe that all of our students, who are the leaders of tomorrow, should be eligible for the financial aid they need to succeed.
“Mayor Bloomberg also highlighted the need of a statewide minimum wage raise. This is a step forward in the right direction, and if enacted correctly, can be complimentary to The Fair Wages for New Yorkers Act, once it becomes law.
“As Mayor Bloomberg noted, our administrations have worked together on an impressive list of projects and we have much more planned for the Bronx in 2012,” said Bronx Borough President Ruben Diaz Jr.
Comments From City Comptroller John Liu
Comptroller John C. Liu’s statement on the Mayor’s State of the City address:

“It was great to hear the Mayor support the Dream Act in New York. It would help unlock the potential that so many New Yorkers possess but can’t realize because of their difficulties gaining access to higher education.

“It was also great to hear that the Mayor supports an increase in the minimum wage, which would be in line with the enactment of living wage legislation for publicly subsidized projects. Both of these measures would help eliminate the increasing income gap that New York has experienced in recent years.

“It was also disappointing that the Mayor used the reduction in employee workforce headcount as a metric of success without acknowledging the ballooning costs of outside contracting.

“The Mayor devoted much of his speech to addressing some of the continuing shortcomings in our public schools, but his harsh criticism of teachers was surprising and unwarranted. They have faced years of demoralizing anti-teacher rhetoric.  At the end of the day, the Mayor and all of us rely on teachers to do the hard work of educating our kids.”
Posted by 100PercentBronx at 4:45 PM No comments: