“As a young kid, I would often travel to Manhattan to enjoy the fun outdoor entertainment provided during the summer. Now, many years later, my summer concert series has become a tradition in The Bronx – bringing together the community to kick back, relax and enjoy some great music with friends and family. I proudly hosted Hector Tricoche in Soundview to provide first-rate entertainment for our families, friends and neighbors. Thank you to everyone who came out and I look forward to many more fun events coming up this summer,” said Senator Jeff Klein.

Hector Tricoche, a star in Latin music, is best known for hits like “Lobo Domesticado,” “Dime Si Ahora Te Vas,” “Mujer Prohibida” and “Yo Que Tu.” The beloved musician has wowed crowds around the world with his melodious voice and sizzling live performances.

“I’m thrilled to perform for all my people of The Bronx — ‘el condado de la salsa.’ It was great to hear everyone sing along to my greatest hits and dance throughout the night,” said Hector Tricoche. 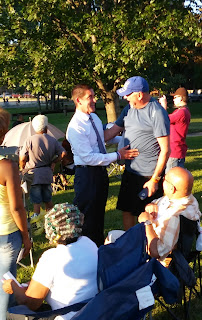 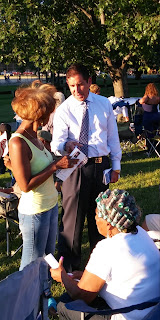 Left and Right - State Senator Jeff Klein went into the audience before the concert to speak to some of his new constituents. Senator Klein would be joined on stage by local Assemblyman Marcos Crespo. 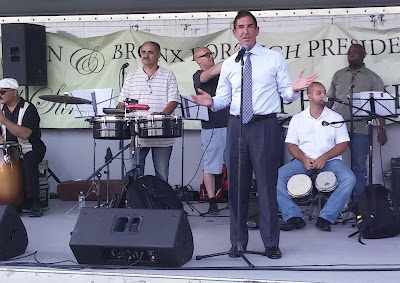 Above - Senator Klein addresses the crowd of several hundred people.
Below - Soundview Assemblyman Marcos Crespo waves to the crowd. 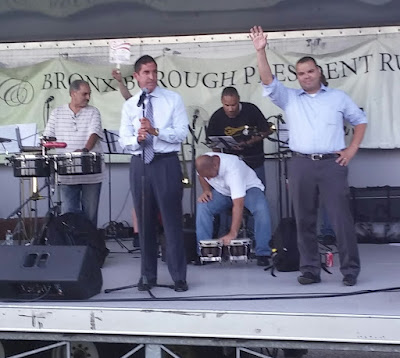 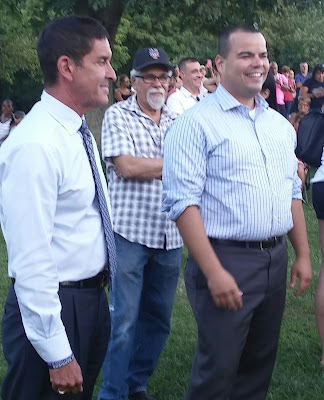 As the concert goes on, Senator Klein and Assemblyman Crespo enjoy the music from audience level. 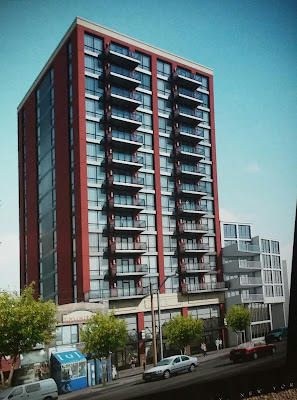 A new 14 story building sited on Riverdale Avenue featuring 48 one and two bedroom apartments with 40 parking spaces, a lobby, and 2,500 square feet of retail space was unveiled by representatives of Simone Developers for the former site of the proposed 11 story Riverdale Montefiore Medical  Center rejected by the community. The apartments in the 14 story building to be on floors 3 - 14 will be condominiums, and become rentals (like the neighboring Tuflan Terrace building)  if the apartments can not be sold. The ground floor on Riverdale Avenue will house a building concierge in the lobby, and have 2,500 Square feet of retail space. The second floor will be for 40 parking spaces of which 7 will be in the building with the remaining spaces lined up back to the Oxford Avenue parking lot entrance. 7 - 8 feet of the current land from where the former DJ Drug store foundation ends to Oxford Avenue will have to be removed for the project which seems to be using the same footprint as the old DJ Drug Store building did.

It was said that Simone Developers (the owners of the former rejected medical center site) is not in the business of building housing, that a 421A Tax Abatement would not be sought, and that the site is still available for sale.


“This legislation will make not only The Bronx but the entire city a safer place, and I am happy that the City Council has answered my call in response to the public health crisis my borough has faced since late July.

“With regular inspections of cooling towers and other infrastructure we can be proactive to prevent future outbreaks of Legionnaires' Disease, and I look forward to Mayor de Blasio signing this bill and making it law.

“My thoughts and prayers remain with the families of those affected by this outbreak, especially the families of the 12 who passed away as a result of this disease,” said Bronx Borough President Ruben Diaz Jr.

As an employer , you will receive a complimentary table, which will not only help fill your job vacancies but also
provide valuable exposure for your company.  The fair will attract hundred of Bronx job seekers with broad qualifications.

Please contact Michelle Dolgow Cristofaro at 718-828-3900 orMichelle@bronxchamber.org, Executive Director and H.I.R.E Administrator  if you are interested in reserving a booth and to learn more about the Bronx H.I.R.E. (Help Identify Real Employment) Program, a new program aimed at connecting Bronx residents with full-time employment through a comprehensive, one-on-one approach.

Call 718-828-3900, emailMichelle@bronxchamber.org or log on to our website at www.bronxchamber.org
for more information
Posted by 100PercentBronx at 2:58 PM No comments:

I hope you are enjoying your summer! I'd like to tell you about some of the issues my office has been working on. As always, I value your feedback and ideas on how we can make New York work for all children and families who call our city home.

Last month, I sent you an e-mail about Elisa W. and the nine other foster children who joined me in filing a class action lawsuit  against the New York City Administration for Children's Services (ACS) and the New York State Office of Children and Family Services (OCFS). Protecting our foster children has continued to be a focus this summer, as we pursue our case. There are currently 11,137 children in the New York City foster care system, accounting for almost 60% of children in foster care in the state. Children in New York City spend over twice as long in foster care than children in the rest of the state and the country. Many of them are victims of physical, sexual, and emotional abuse while in care.  Please read a summary of our case and our full complaint to learn more about Elisa's story and the stories of the children we are fighting to protect.

Our nation is bleeding from gun violence. We cannot, and should not, bolster the gun retailers whose weapons are used to kill and damage our communities. Last week, the New York City Employee Retirement System(NYCERS) overwhelmingly passed my resolution to begin divestment proceedings from gun and ammunition retailers, such as Walmart. A study will be conducted of NYCERS' investments in gun retailers, including Walmart, Dick's Sporting Goods, Big 5 Sporting Goods, and Cabela's. The transitional costs of divestment, and a transition strategy to ensure minimal financial impact to the City, will also be developed.

Fighting for the Futures of Working Families

Our current retirement system is broken. Millions of New Yorkers are facing a retirement without adequate savings or a retirement plan. My office issued a report highlighting the urgent need for New York City to take action against an impending retirement crisis. I introduced legislation that will be the first step in a process to create a City-based retirement savings program. This program would place no significant financial burden on taxpayers or private employers, but uplift millions of New Yorkers for generations to come. In fact, states like California, Illinois, and Massachusetts are already moving forward with similar initiatives, and New York City cannot fall behind. Retirement should not just be a luxury for the rich, and I am determined to do everything I can to ensure every working New Yorker can live out their golden years with security and dignity.

The Movie on Riverdale Avenue! has been 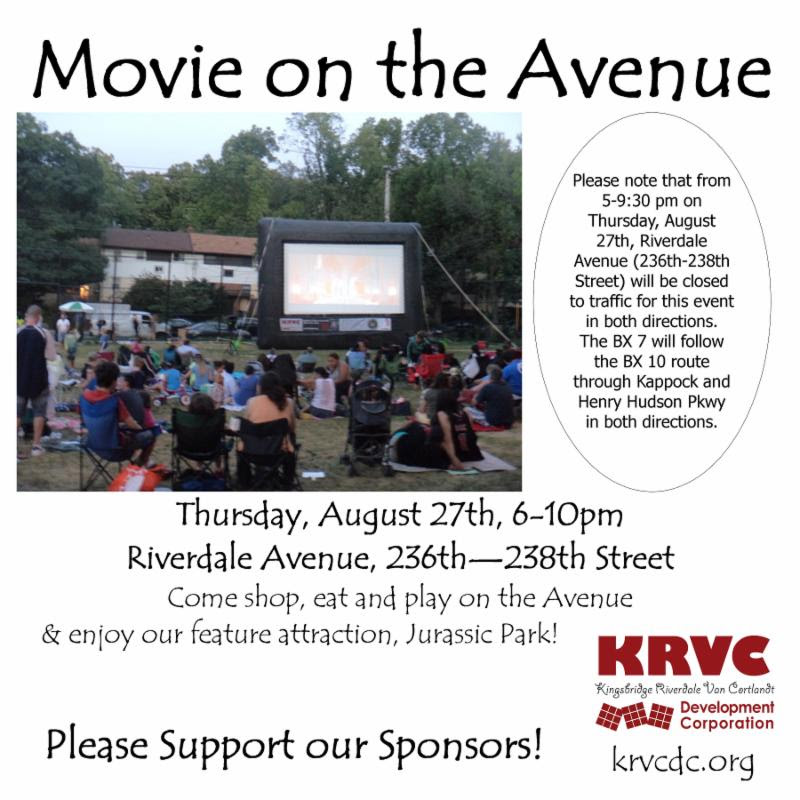 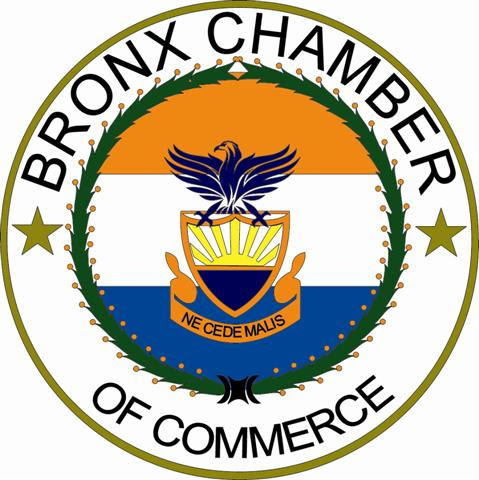 Assemblyman Crespo's donation was also sponsored by New York State Senator Ruben Diaz, Sr. Thanks to Mr. Frank Strongbow for this item which was edited for content.

You're Invited to Celebrate 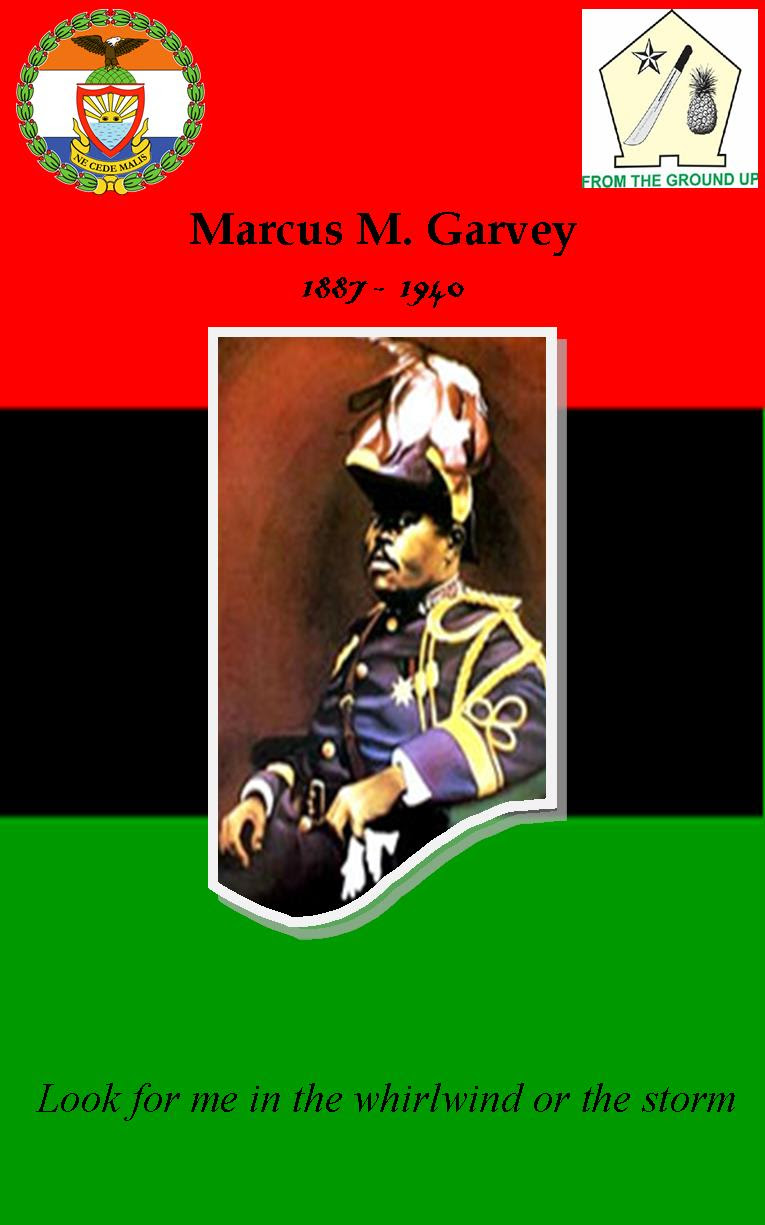 Email ThisBlogThis!Share to TwitterShare to FacebookShare to Pinterest
Labels: You're Invited to Celebrate 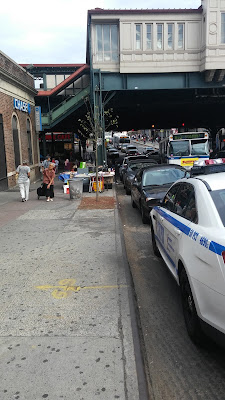 Police cars lined the bus stop on West 231st Street at the entrance to the Southbound #1 subway line after 3 PM, while a police officer stood in front of the Chase Manhattan Bank located at 5581 Broadway after the bank was robbed. According to 50th Precinct Commanding Officer O'Toole a note was passed to one of the tellers demanding money, while the suspect said that he had a weapon. The teller gave a yet undisclosed amount of money to the suspect who then fled on foot up Broadway. Captain O'Toole described the suspect as a 6 foot male Black in his mid 30's, and that the video cameras in the bank had good footage of the suspect and the robbery. It is not known how soon the suspect will be apprehended. 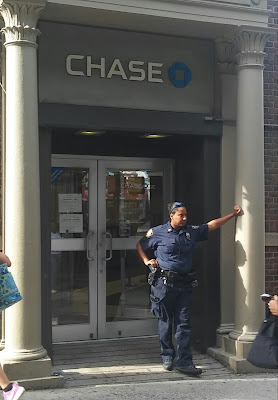 Above - One police officer stands in front of the Chase Bank located at 5581 Broadway to make sure the crime scene is not interrupted.
Below - One of the CSU officers is seen in the doorway of the bank. 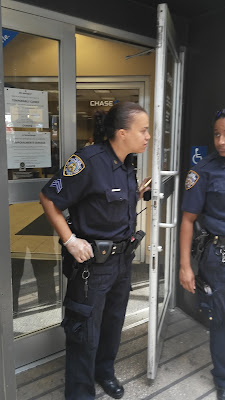 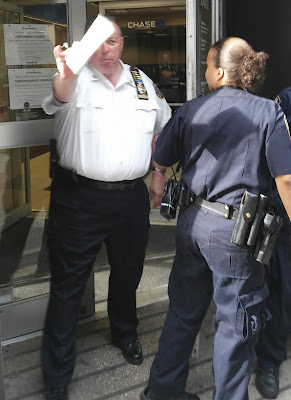 Captain O'Toole the commanding officer of the 50th Pct. was right on the spot just after the Chase Bank was robbed. He spoke with me in front of the bank about the robbery. A notice on the bank door says that the bank is closed due to an emergency. The ATM windows on West 231st Street remained open and were very busy.

STATEMENT FROM BP DIAZ RE: Legislation on Legionnaires Inspections


“When it became clear that such outbreaks of Legionnaires’ Disease could be prevented through regular inspections, I proposed that the City Council move to create such legislation as quickly as possible. Today’s announcement is a great first step towards developing a system of regular inspections for cooling towers and other infrastructure that could breed the legionella bacteria.

“I will continue to work with all levels of government to ensure that we are better prepared to combat future epidemics,” said Bronx Borough President Ruben Diaz Jr.

Borough President Diaz first proposed legislation to address the lack of an inspection mechanism for cooling towers and other breeding grounds for the legionella bacteria last month. His original statement can be found here: http://on.nyc.gov/1Iz2ATC.

Email ThisBlogThis!Share to TwitterShare to FacebookShare to Pinterest
Labels: STATEMENT FROM BP DIAZ RE: Legislation on Legionnaires Inspections

Email ThisBlogThis!Share to TwitterShare to FacebookShare to Pinterest
Labels: Stand Up To Violence Saturday August 22nd


Below are a few photos ogf the Parkchester festival that took place at the Unionport and Metropolitan Avenues oval. 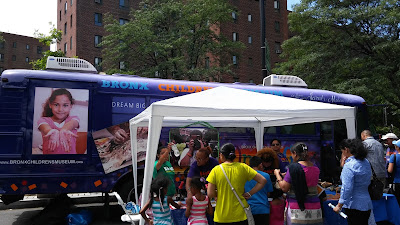 Above - The Bronx Children's Museum was on hand.
Below - Besides free hot dogs there was free cotton candy given out. 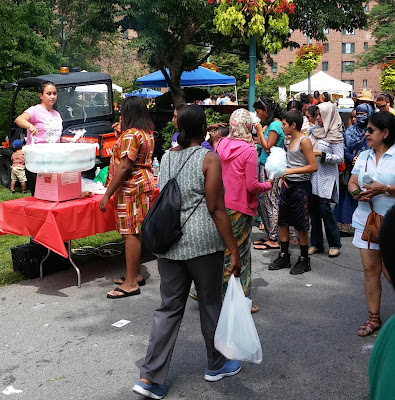 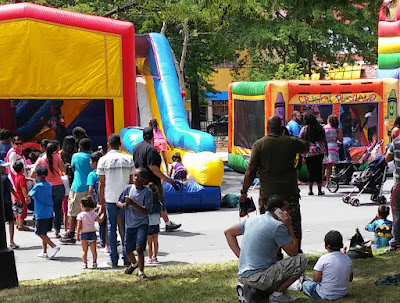 Above- Inflatable slides and a Bouncy Castle were set up for the children to enjoy.
Below - There were many vendors for the adults to browse. 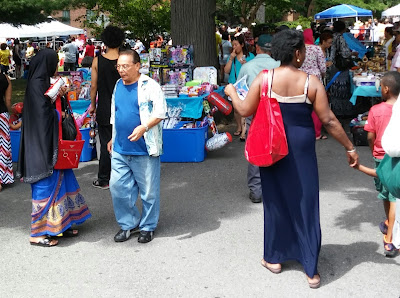 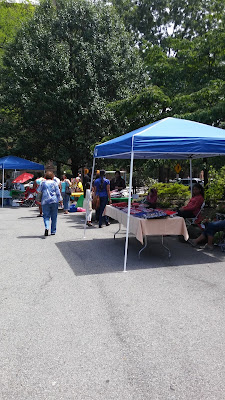 Above - Another vendor.
Below - A stage was set up to showcase the entertainment. 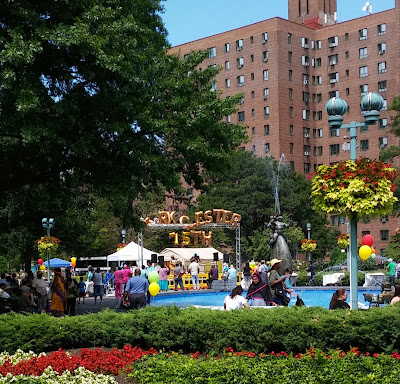 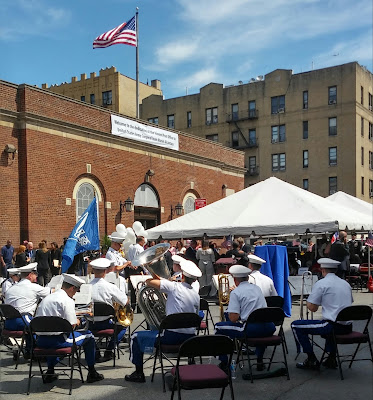 Above - It was all eyes on the renaming of the Vermilyea Avenue Post office in the Inwood section of Manhattan the Corporal Juan Mariel Alcantara Post Office as the banner on the top of the building states.
Below - A few of the elected officials and family  of Corporal Alcantara. 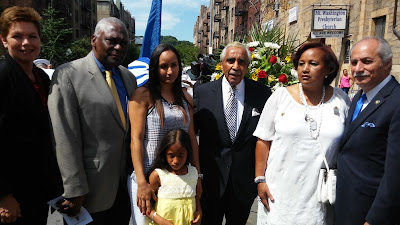 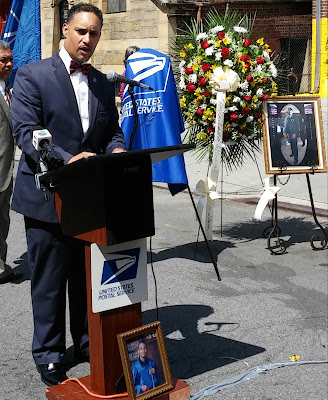 Above - The Master of Ceremony was Manhattan Community Board 12 Chair George Fernandez.
Below the Color Guard places the flags in their places. 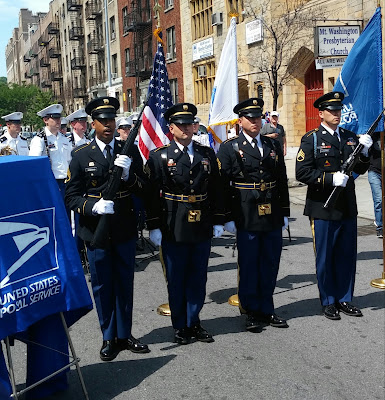 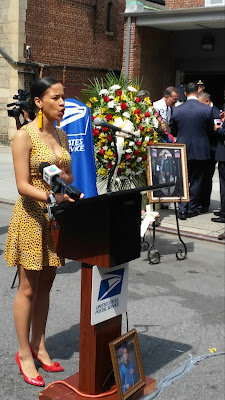 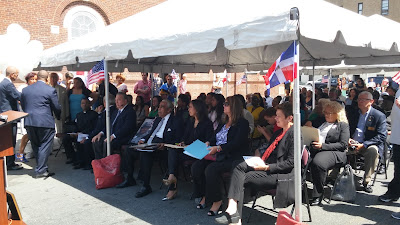