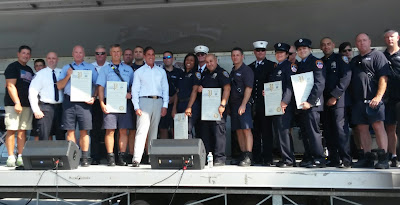 The photo above was what is was all about - Giving appreciation to those who are the first responders to an emergency situation. State Senator Jeff Klein held his fifth annual First Responders Appreciation Barbecue today at Orchard Beach. The barbecue was held to thank the brave men and women who have risked their their lives to protect the safety and security of New Yorkers. 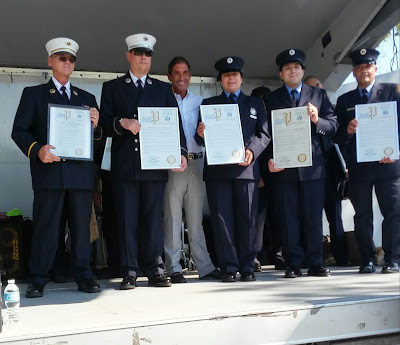 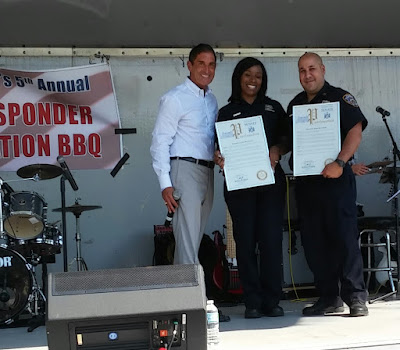 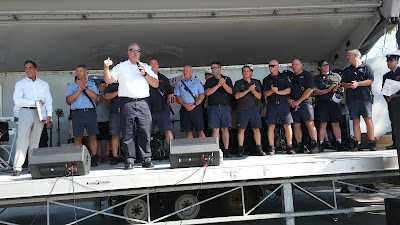 Above - Members of the FDNY  receive citations from Senator Klein.

Below = the men of Engine 81 and Ladder 46 (from the Bailey Ave. firehouse) were among those honored. 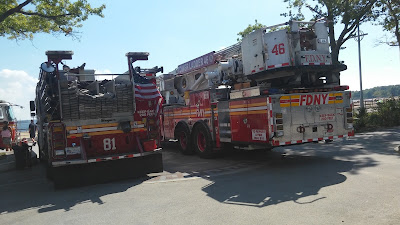 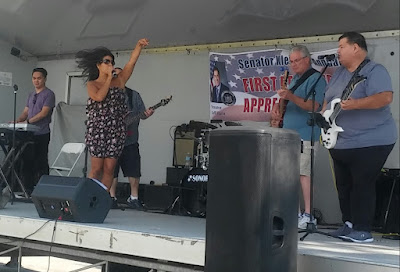 Above and below - Senator Klein had lots of entertainment, games and food to enjoy before and after the awards were given out to the deserving local heros. 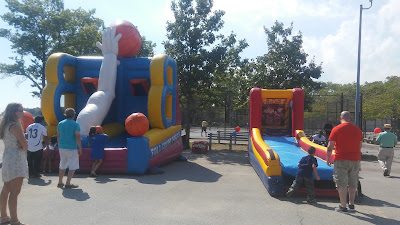 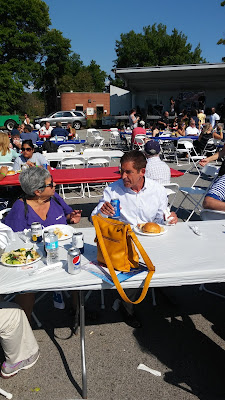 Senator Klein is talking to a constituent, as he is enjoying some of the food that was provided to the hundreds of people who came to help celebrate the first responders.

"We recently heard from Bronx District Attorney Robert Johnson regarding his interest in moving on from his role as Bronx County District Attorney and, as with any other candidate who has reached out, we discussed the possibility of nominating him for one of the upcoming vacancies in the Bronx Supreme court. If the Judicial Delegates who were nominated and elected by the residents of the Bronx choose to select him as one of the Democratic candidates for Bronx Supreme Court, the position will become vacant and we have a responsibility and obligation to nominate a replacement as the Democratic Party's candidate in the District Attorney race, in accordance with election law." 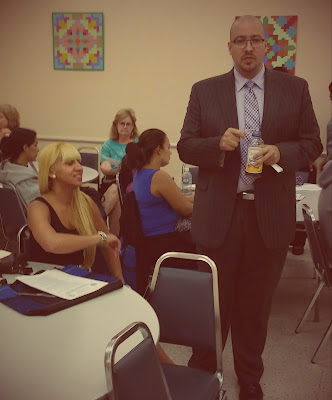 While State Senator Gustavo Rivera is shown above talking to newly reappointed Community Board 7 member Iashia Bravo, that was only the beginning of what would turn out to be a big surprise later in the evening. Yes that is a 'Diet Snapple' in the hand of State Senator Gustavo Rivera who said that he had to many 'Happy Meals' when he was a little boy. 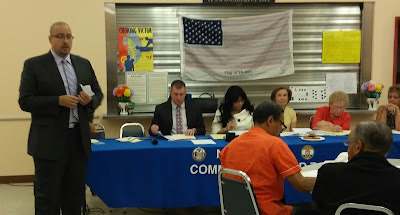 Above - State Senator Gustavo Rivera would later address the crowded audience at the CB 7 September full board meeting.
Below - Councilman Fernando Cabrera was the next elected official to address the audience. 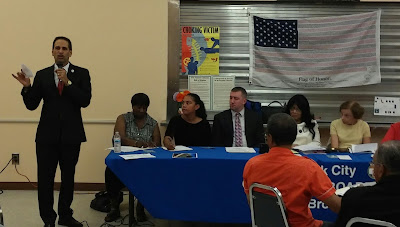 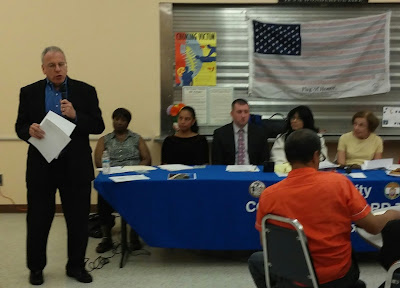 Above - Assemblyman Jeffrey Dinowitz tells the audience many things, as you can see more than one sheet of paper that he was reading from.
Below - Assemblyman Victor Pichardo who also covers CB 7 speaks to the audience. 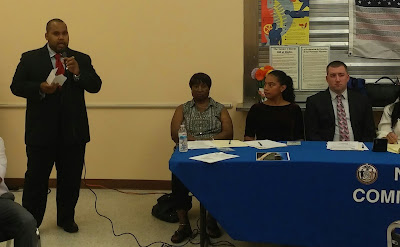 Not withstanding the reappearance of Ms. Iashia Bravo (who was the Housing Chair of CB 7 very briefly before she resigned from CB 7) there was speculation about her reappointment to CB7. Ms. Bravo said that she might be seeking to run for the 78th Assembly District seat next year, but there could be another position she may be going for now that she was replaced by the Assemblyman Marcos Crespo the new Bronx Democratic County Leader as Executive Director of the BDCC that opened up as the meeting went on.

Community Board 7 District Manager Dustin Engelken announced during the District Manager's report that he will be leaving his position as District manager as of October 10th, thus giving CB 7 three weeks notice. Engelken would only say it was personal reasons. He said that his wife has accepted a job offer in Germany, and that he would be moving there with her. Engelken was chosen as the new DM of CB 7 at the May 2014 board meeting. He now becomes the third District Manager in as many years to leave CB 7. Tom Lucania of Bronx Borough President Ruben Diaz's office will assume the duties of the District Manager until the board finds a replacement once again. There is speculation that Ms. Iashia Bravo may become the next District Manager of CB 7.

First established in 2011, the Meals on Wheels program has since doubled in size — now delivering more than 10,000 meals to homebound seniors annually. Senator Klein met with local volunteers and delivered a hot meal to a Woodlawn senior.

Senator Klein said: “In a community where the senior population is nearly two times that of the rest of The Bronx, Emerald Isle Immigration Center’s Meals on Wheels program provides an invaluable service to Woodlawn seniors. This year, I’m proud to have secured $100,000 in state funding for Emerald Isle’s program to help build capacity and expand enrollment. I look forward to partnering with the Emerald Isle Immigration Center to improve the quality of life and increase access to services in the community for many years to come.”

In just four short years, Senator Klein has allocated more than $250,000 to Emerald Isle Immigration Center Meals on Wheels, including initial funding that jump-started the program in 2011. Since then, the local Meals on Wheels program has become a service on which many local seniors depend. Each day, the program delivers 30 to 40 hot meals to community members. The funding secured by Senator Klein in this year’s state budget will go toward capacity building and expanding the program.
Siobhan Dennehy, executive director of the Emerald Isle Immigration Center said: “We have seen first-hand the benefits that delivering a meal can make to this neighborhood. Quite simply, this program and its reliable connectivity can transform and even save lives. We are truly grateful to Senator Klein for his vision and support of our community by ensuring this funding was continued for another year. To date, we have served more than 10,000 meals and with the help of our amazing staff and volunteers are already planning delivery of the next 10,000.”

Josephine O’Donahue, a Woodlawn senior, said: “Thank you Senator Klein for delivering for Bronx seniors. I have been a member of Meals on Wheels for over a year now and I can say without a doubt that this program has come to play a vital role in many seniors lives. I applaud Senator Klein’s efforts to help improve access to services in Woodlawn and I look forward to the Meals on Wheels program’s continued expansion in the community.”

You should know that even though the so-called experts, political pundits and pollsters are having their say, I believe that there are more Hispanics supporting Donald Trump than what “they” say.

It is important for the pollsters to take into consideration that when we speak about the Hispanic vote, we have to separate it into various groups. Among them are Puerto Ricans, Cubans, Mexicans, and Dominicans.

I guarantee you, my dear reader, that each one of those groups have a different opinion of Donald Trump.  Also, in order to have an understanding of some of the idiosyncrasies that exist among Hispanics, we have to divide Hispanics into 3 groups: the Puerto Ricans who are American citizens by birth, the documented immigrants, and the undocumented immigrants.

When I walk the streets of New York - especially in Bronx County - and speak with Hispanics, much to my surprise the things that I hear from them are very different than what the papers and the pollsters are saying about them and Trump.

The Puerto Ricans, who claims to be the first Hispanic group who came to this country and received many abuses, were rejected, receiving many “macanazos” (hit with the police baton), open the door for every other Hispanic group, and ate the bones. Now, they feel rejected, displaced and taken for granted, receiving less benefits than they need, while others eat the meat.

For this reason, many Puerto Ricans are carrying strong emotional burdens deep inside. Many Puerto Ricans go about their lives, unwilling to publicly expressing their feelings and publicly going along with it all. This is due to the fact that unions, newspapers and even elected officials have made them feel like it is a crime to express their true feelings.

Many Puerto Ricans are like walking political time bombs, ready to explode, and they might think that in Donald Trump they have the person to press the red button.

The second group is the Cubans. The majority of Cubans who live in the United States have been expatriated by the dictator Fidel Castro, and they are dying to see Cuba free of that dictatorship. After seeing and hearing Donald Trump, little by little they have been aligning themselves with Trump to the point that even in Florida, where their former Governor Jeb Bush and their current U.S. Senator Marco Rubio reside and who are also candidates, Donald Trump is taking all of the Cuban votes in that state.

These realities just might give Donald Trump a little advantage with the Dominican vote here in the United States.

In regard to the Mexicans, I believe that this sector of the Hispanic community will be the most difficult, if not impossible for Mr. Donald Trump to convince. This is a result of statements he made on June 16, 2015 when he declared his candidacy and stated: "When Mexico sends its people, they’re not sending their best. They’re sending people that have lots of problems. They’re bringing drugs. They’re bringing crime. They’re rapists."

For this reason, the majority of Mexicans have turned against Trump.

On the other hand, my dear reader, there are so many documented immigrants who came to this nation through legal channels. They sacrificed themselves, paid the price and waited their turn, and after becoming American citizens, they themselves do not support illegal immigration.

I personally have hear some of them saying: “If I sacrificed myself and waited my turn, then they have to wait their turn, too.”

You should know, my dear reader, that the sentiments and frustrations from these different groups of Hispanics should be taken into consideration by the political pundits before deciding who is supporting Donald Trump and who is not.

As my philosophy teacher from Lehman College in the Bronx used to say: “Children of my heart, that blue sky isn’t blue and it’s not a sky.”

I am Senator Reverend  Rubén Díaz and this is what you should know.

Email ThisBlogThis!Share to TwitterShare to FacebookShare to Pinterest
Labels: There Could Be More Hispanics For Trump Than What’s Been Said

Join us for the Hispanic Heritage Cultural Dance Off this Saturday!

Email ThisBlogThis!Share to TwitterShare to FacebookShare to Pinterest
Labels: Join us for the Hispanic Heritage Cultural Dance Off this Saturday! 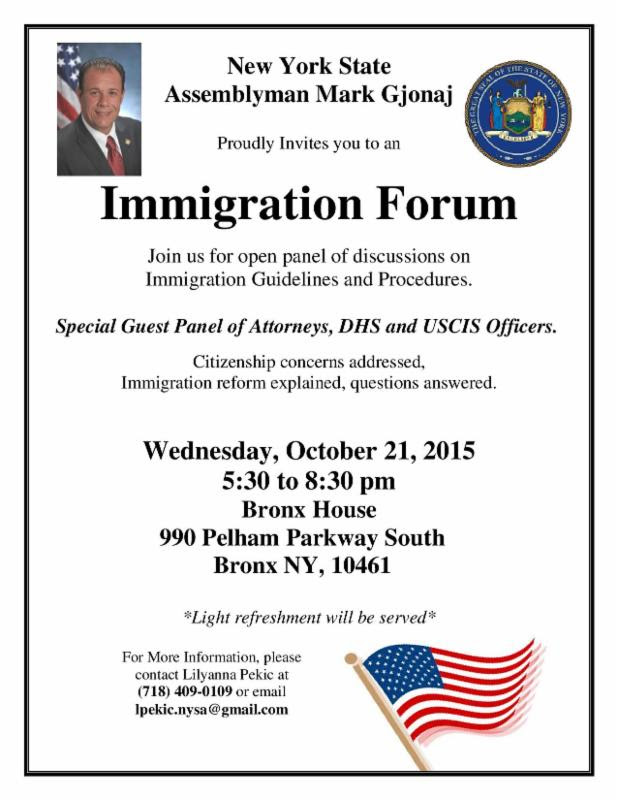 
Former Democratic Assemblyman Bill Scarborough was sentenced to 13 months in prison and two years of supervised released after he pleaded guilty to state and federal corruption charges, as reported by State of Politics today.

The 69 year old former Queens County state legislator is also being ordered to pay $53,355.00 in restitution's to the state, while forfeiting the same amount to the federal government.

Scarborough pled guilty to misuse of campaign funds, and federal charges that he improperly sought 'Per Diem' payments which caused his removal from the State Assembly.

You can read the full State of Politics article, and the comments by the the U.S. Attorney, N.Y. Attorney General, and State Comptroller HERE.

Email ThisBlogThis!Share to TwitterShare to FacebookShare to Pinterest
Labels: Former Assemblyman Bill Scarborough Sentenced to 13 months in prison and 2 Years of Supervised Released

Upcoming Events and Grand Openings From the Bronx Chamber of Commerce


Please Join us for our Upcoming
Grand Openings, and Access to
Capital Event Business Workshop