BOROUGH PRESIDENT DIAZ ISSUES
2011 “BACK TO SCHOOL” GUIDE
The office of Bronx Borough President Ruben Diaz Jr. has issued a “Back to School” guide, containing helpful tips for parents regarding the upcoming school year.
The guide, which is available on the borough president’s website and will be issued to schools and community organizations across The Bronx, includes information on registering students for public school, determining a student’s zoned school and finding school transportation, as well as information on programs for special education students and English Language Learners (ELL). The guide is available in both English and Spanish.
“As a parent, I know how stressfull the first few days of school can be, both for the parent and for the student. For that very reasoon my office has put out a ‘Back to School’ guide to help parents navigate the public school system,”said Borough President Diaz.
Borough President Diaz will also be hosting the first ever Education Summit on October 15.  The goal of the summit it to create an agenda for increasing student educational achievement in the Bronx, from the most gifted to the those who need extra help.  This summit will also bring together the best minds on education from not only the Bronx, but also the city and the nation, to discuss the issues facing the education system in the Bronx and potential solutions to them.
For more information about the Education Summit please visit www.bronxeducationsummit.org
To view our “Back to School” guide please visit the sites below:
English: http://bit.ly/ngSdjK
Spanish: http://bit.ly/nvZ8R5
Posted by 100PercentBronx at 6:34 PM No comments:

YDANIS CUTS THE RIBBON ON THE NEW HIGHBRIDGE BASEBALL PARK

After providing $1.5 million in funding, Councilman Ydanis Rodriguez joined State Senator Adriano Espaillat, State Senator Bill Perkins, Assemblymember Guillermo Linares, the Department of Parks and Recreation and dozens of young baseball players to cut the ribbon on Highbridge Park's new baseball field.
Anyone who grew up playing baseball in Highbridge can remember the poor condition of the field, but after nine months of construction, the field will now have new seating, dugouts, drinking fountains and the field itself will now be completely level.
With a few weeks of summer left before school starts, make sure that you're able to see the beautiful new field for yourself!

Senator Reverend Ruben Diaz Disappointed by Public School Sex Ed Agenda
Senator Reverend Ruben Diaz Disappointed by Public School Sex Ed Agenda
New York State Senator Reverend Ruben Diaz (D-Bronx) released the following statement in response to the New York City public school system’s sex education mandate:
“I am troubled and dismayed that during his third term as Mayor, Michael Bloomberg intends to completely usurp the role of parents and implement a new sex education curriculum in the public schools.
In matters involving intimacy and human sexuality, parents have the right and the responsibility to be the primary educators.  Many parents teach their children that these are private topics not to be discussed casually or in group settings.
Twenty years ago, a similar mandate was defeated.  At the time, I was honored to stand beside Dr. Irene Impellizzeri when she served as Vice President of what was then the New York City Board of Education.  During that time, there was opportunity for parental input.  The parents were heard and they were respected.  So were the children.
Now there is no formal arena for formal parental input.  There is no opportunity for public hearings.  There are no requirements that these regulations be open to public review and comment.
No accountability to the public, to the parents, and certainly not the children.
How sad for us all.”
Posted by 100PercentBronx at 8:49 AM No comments:

Should Bert and Ernie Get Married?


A petition started by Lair Scott, exhorts the makers of Sesame Street to let the two old friends get hitched. Gay marriage became legal in New York this June, increasing the number of states in the country to do so to six.
This link http://www.huffingtonpost.com/2011/08/10/bert-ernie-gay-marriage_n_923147.html goes into detail as to why over 900 people have signed the petition. Sesame Street since its start in 1969 have had Bert and Ernie living together, and many viewers questioned if the pair were indeed gay. That leads one person to say why stop at Bert and Ernie when Yogi and Boo Boo have lived together even longer.
What is your opinion, should Bert and Ernie come out of the closet and get married?
Posted by 100PercentBronx at 4:22 PM No comments:

City Comptroller Liu issued the following statement in response to questions concerning today’s New York City Franchise and Concession Review Committee vote to award cable franchises to Time Warner and Cablevision:
Comptroller John Liu said the following:“Today’s vote provides New Yorkers with increased consumer protections but more can be done, especially when it comes to cable television blackouts. My office recently wrote a letter to the FCC expressing support for additional consumer protections during blackouts, and will
continue our dialogue with all New York City cable providers regarding our concerns. We will also work with the City’s Department of Information Technology & Telecommunications to ensure aggressive enforcement of enhanced consumer protections in our franchise agreements. I also want to acknowledge the years of hard work conducted by the City’s Borough Presidents, who should be commended for making expanded public access a reality.”
Posted by 100PercentBronx at 5:08 PM No comments:


Council Member Oliver Koppell is pleased to announce that the Department of Transportation (DOT) has approved his request for the installation of a traffic signal at Bailey Avenue and West 234th Street.  A DOT study confirmed Koppell’s contention that vehicles speeding in both directions on Bailey Avenue presented a danger to people trying to cross the avenue.  Installation of the traffic signal is tentatively scheduled to be completed by November 30, 2011.
According to area residents, the large number of children crossing Bailey Avenue at 234th Street because of the proximity of the Bailey Playground and the Ft. Independence Community Center, located diagonally across the playground, made the installation of a traffic signal essential.
“I am pleased that DOT responded to my concerns about the safety of people, especially children, crossing Bailey Avenue at  234th Street by agreeing to install a traffic signal at this location,”  Koppell said.
Posted by 100PercentBronx at 4:59 PM No comments:

Email ThisBlogThis!Share to TwitterShare to FacebookShare to Pinterest
Bronx Half Marathon


On Sunday August 28th the Bronx Half Marathon will kick off at 6:30 AM on the Grand Concourse just north of E.161th Street. The half marathon will travel up the Grand Concourse to Bedford Park Blvd West, Goulden Ave (detour around the DEP street closure), to West 205th Street, Paul Ave., Mosholu Parkway, and Southern Blvd, around the Bronx Zoo.
We were told by NY Roadrunners that the ending point is the Grand Concourse and E.161th Street, and that the entire route has not been ffinalized which would mean that Fordham Road or another cross street would be used to return to the Grand Concourse.
Streets listed will be closed from 6:30 AM - 10:30 AM to allow for the Bronx Half Marathon. You can call Mr. Philip Santora at NY Road Runners for more information at 212-423-2211.


HOW TO DO BUSINESS WITH THE NYC DEPARTMENT OF SANITATION (DSNY)


What You Will Learn:

The New York City Department of Sanitation is seeking qualified Minority & Women‐Owned Business Enterprises (M/WBE) to be their contractors for goods, services and construction. If you are interested in working with them, please contact Mr. Santo Cimino at (917)237‐5349. For additional information, please visit DSNY’s website at www.nyc.gov.

RSVP Evangeline Gelladola (718) 732‐7538 or RSVP to cedevents@sobro.org
For more information about SoBRO’s Procurement Technical Assistance Center (PTAC), upcoming workshops and our M/WBE Program contact us at (718) 292‐3113 or visit www.sobro.org.

In a poll just released only 24% of Americans say that the congress should be re-elected. This is the lowest percentage of approval since Gallop began polling Americans 20 years ago. The poll also found that little more than 50% favor re-electing their own congressional representative. President Obama came in below a 50% approval rating when the question of his performance was asked.

You can read more here by Celeste Katz of the Daily News.

Saturday August 13th starting at Noon is the annual Morrison Avenue Annual Festival. See the flyer below for more details. 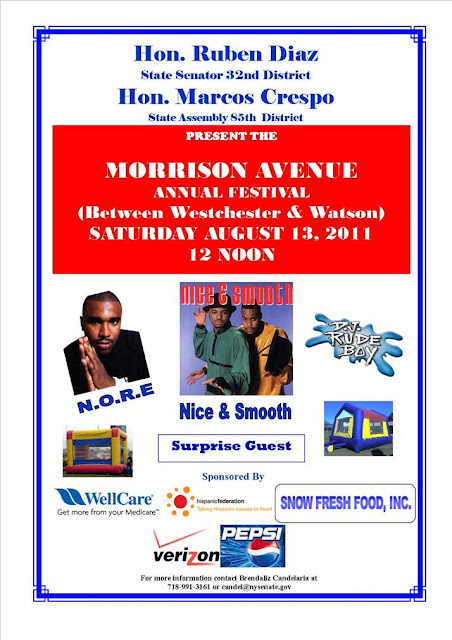 
“No one is better able to advocate for our aging population than seniors themselves,” said Aileen Gitelson, CEO of the Jewish Association for Services for the Aged (JASA). To that end, JASA is offering a 10-week program through its Institute for Senior Action (IFSA) for older New Yorkers to learn how to get more involved in the legislative process and be an effective advocate. The program integrates critical aging policy issues with practical grassroots action. Classes focus on a wide variety of subjects including: navigating the federal, state and local legislative processes, public speaking, understanding senior benefits and entitlements, techniques of social action, and much more.
“The goal of JASA’s Institute for Senior Action is to help older New Yorkers become informed advocates, speaking with authority and clarity on issues that directly affect them,” said Gitelson. To date, more than 750 people have participated in the JASA program.
The course begins Wednesday, September 21. Sessions will be held 10:00 a.m. to 2:30 p.m. at JASA Cooper Square, 200 East 5th Street, New York, New York.
To request an application, contact Bola Aribidesi, Project Director, JASA Institute for Senior Action, 212-273-5261; ifsa@jasa.org.
JASA is one of the largest community-based, voluntary social service agencies serving the aged in the United States. Its mission is to sustain and enrich the lives of the aging in the New York metropolitan area so that they can remain in the community with dignity and autonomy.
Posted by 100PercentBronx at 6:03 PM No comments:

Former New York Governor Hugh Carey passed away yesterday.at the age of 92. Current and former elected officials and friends had only praise for Carey.
Posted by 100PercentBronx at 1:09 PM No comments: