It is official that the police officer killed in a fatal car accident on Sedgwick Avenue was off duty from the 43rd Precinct by the name of Shane Sullivan which we reported earlier today. Police officer Sullivan was twenty-seven years old and on the force for four years.

It is suspected that Officer Sullivan had a medical emergency similar to a heart attack which caused his car to strike a tree causing his death. There were no reports of any other injuries, and Black Bunting now covers the entrance to the 43rd Precinct. 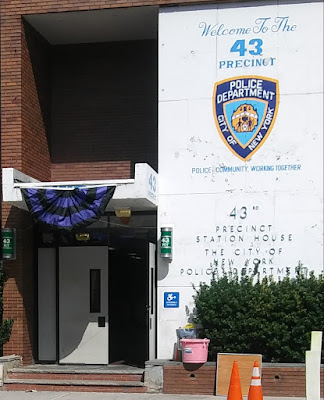 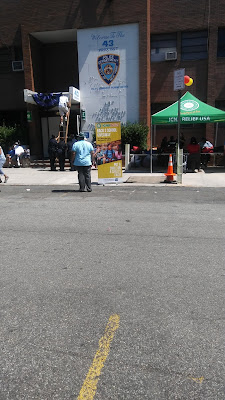 Black Bunting was placed over the entrance of the 43rd Precinct, as it was learned that one of the precincts officers died in a car crash on Sedwick Avenue.

While Downtown NYPD would only say that it was a twenty-seven year officer of the 43rd Precinct I was told that the name of the officer was P.O. Shane Sullivan a Vision Zero Officer.

More as details unfold with a possible announcement at 3 PM at the 43rd Precinct.

Pre-K for All closing achievement gap and improving test scores 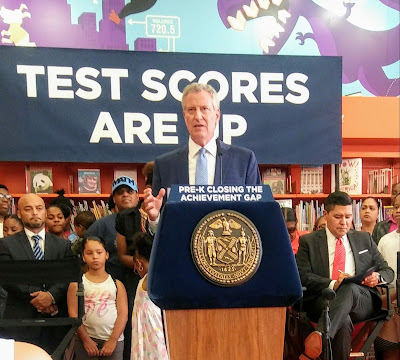 Mayor Bill de Blasio and Schools Chancellor Richard A. Carranza today announced New York City students’ gains on State English and math exams. In 2019, 47.4 percent of students met proficiency standards in English, a 0.7 point increase from 46.7 percent last year. City students outperformed their New York State peers on State English exams for the fourth year in a row. 45.6 percent of students met the standards in math, a 2.9 point increase from 42.7 percent last year. New York City students’ proficiency in both subjects improved across all ethnic groups. Additionally, the White-Black and White-Hispanic achievement gaps were narrower for students who attended Pre-K for All compared to those who did not, illustrating the long term benefit of the program.

“Test scores are in and the students who enrolled in Pre-K for All are still seeing the benefits years later. Our first class of Pre-K students are closing the opportunity gap and improving scores across the board,” said Mayor de Blasio. “Coupled with higher graduation rates and increased college readiness, we are moving in the right direction. There is still lots of work ahead, but the future is brighter than ever for students and their families.”

“Today we celebrate the hard work of New York City children, families and educators,” said Schools Chancellor Richard A. Carranza. “This progress, along with record-high graduation and college enrollment rates, is further evidence that our Equity and Excellence for All agenda is working, and for the first time, we’re seeing promising signs from our Pre-K for All initiative reflected in State test scores. We are more determined than ever to advance equity now and ensure all New York City public school students have access to the high-quality education they deserve.”

Grade 3 test takers had the highest proficiency of any grade in ELA and Math in New York City and their gains outpaced their New York State peers. A large and growing body of research has demonstrated that children enrolled in full-day, high-quality pre-K are better prepared to learn and be successful in later grades, and New York City parents with children enrolled save an average of $10,000 in childcare costs.

New York City schools are the strongest they’ve ever been across multiple measures, including:
New York City students’ performance on State exams goes hand-in-hand with these gains, and reflects investments in the Mayor and Chancellor’s Equity and Excellence for All agenda.

Note: Numbers include Districts 1-32 and 75. Differences are based on unrounded numbers.

The Department of Housing Preservation and Development and the Housing Development Corporation announced today major changes to HPD’s affordable housing lottery application that will further increase access for a wide range of New Yorkers to qualify for affordable housing. The expanded guidelines will have an immediate impact for some of the most vulnerable New Yorkers, offering the option to show positive rental history instead of submitting to credit checks, or provide their own credit checks, and allowing for additional occupants per unit.

“For too long, families without access to credit have faced barriers to the affordable housing they need.  By allowing New Yorkers to submit rental history instead of credit checks, we are creating a fairer system for all New Yorkers,” said Mayor de Blasio.

“We will continue to challenge the practices that have perpetuated inequality and injustice for decades. These new changes, paired with the grassroots work we’re doing with the Where We Live NYC initiative, are moving the needle toward our goal to make New York the fairest big city in the country,” said HPD Commissioner Louise Carroll.

The new policies reduce the chances of a tenant being denied a unit due to poor credit history, with the introduction of the option for applicants to provide 12 months of positive rent payment history rather than a landlord-initiated credit check. This change also paves the way for applicants to apply for affordable housing without the need to provide a Social Security Number or an Individual Taxpayer Identification Number for every adult in the household. The policy updates also lower credit check fees to sync with the new State rent laws, which limit credit check fees to $20 per application, and lets applicants avoid fees altogether by providing a recent credit check to the landlord.

Email ThisBlogThis!Share to TwitterShare to FacebookShare to Pinterest
Labels: DE BLASIO ADMINISTRATION MAKES IT EASIER TO QUALIFY FOR AFFORDABLE HOUSING 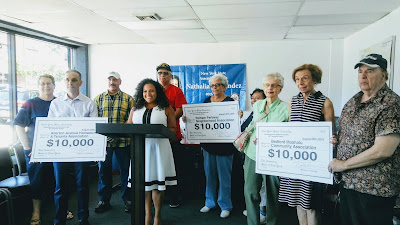 The community organisations that received the checks were the Pelham Parkway Neighborhood Association, Mosholu Parkway Community Association, and the Allerton Avenue Homeowners Association. 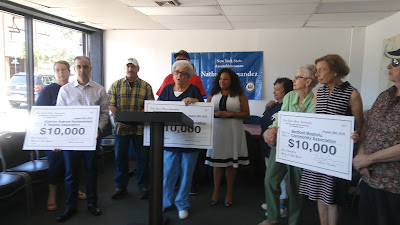 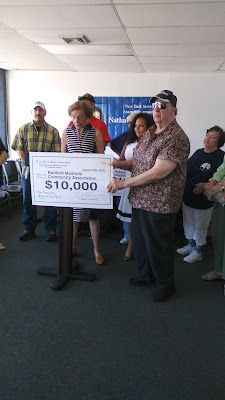 Ms. Barbara Stronzer of the Bedford-Mosholu Community Association thanks Assemblywoman Fernandez for her association's check. 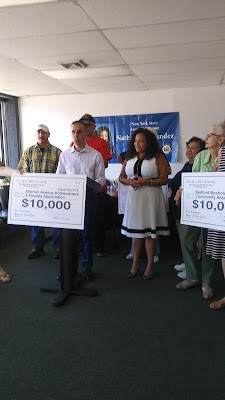 Mr. Frank Tirabasso of the Allerton Avenue Homeowners Association thanks Assemblywoman Fernandez for her check for his association.

Vacation Time For Me Finally

To all my faithful followers I am taking my first vacation since I began this blog.
I am still working on a few stories for the Bronx Chronicle and Parkchester Times, but I will still be carefully watching what is going on in politics, especially the 15th Congressional race.

There may be items put up during my vacation, so check back often.
Posted by 100PercentBronx at 7:05 PM No comments: