It was a warm sunny afternoon as family and friends of Lesandro 'Junior Guzman Feliz gathered by his grave site to remember him on the second anniversary of his killing, and the day after he was to have graduated from the Dr. Richard Izquierdo Health and Science Charter High School. Balloons were let go by the students to rise to the heavens where Junior now is.

Prayers were said as more and more people came to remember Junior. A small police detail was on hand since Lesandro was in the Explorers program at his police precinct, and he had hopes of joining the police force as soon as he was old enough.

Only five of the thirteen gang members involved in the killing of Lesandro have been tried and convicted, and there is another twist to this story. Former Army Sergeant John Perez has joined with City Councilman Fernando Cabrera to move the process to have the NYPD posthumously make Lesandro 'Junior' Guzman Feliz a police officer. This was his goal in life, and his life was cut short before he could become a police officer. That would also make it much harder for the five already convicted to make parole, and charges on the other eight defendants could be upgraded to murder of a police officer. 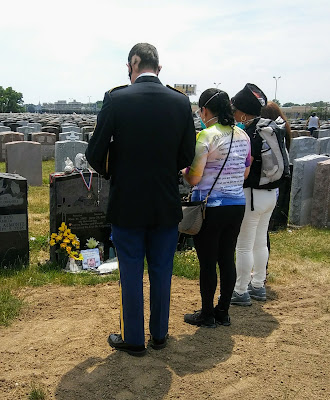 Above - Sergeant John Perez stands with the immediate family in front of the grave of Lesandro 'Junior' Guzman Feliz.
Below - Prayers are said as more mourners arrive, including several officers from the NYPD in the background. 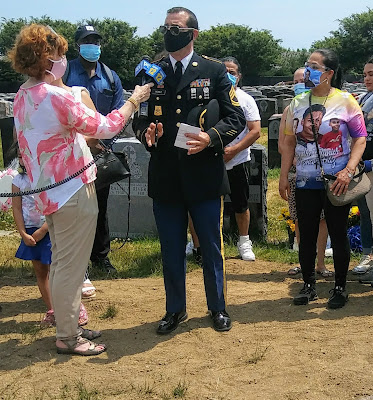 Michael Blake - Families of Victims: Do Not Vote for Ritchie Torres

Several family members who have lost loved ones to police murder have courageously written an open letter with a simple message: “DO NOT VOTE FOR RITCHIE TORRES.”

I am humbled by the bravery of Iris Baez and the others who have signed this letter. I see your strength, your resilience, and your honesty.

They wrote: “At a time when the whole country is focused on police violence against Black and Latino communities, the last thing we need is to promote an elected official like Ritchie Torres who has lied to us as families and betrayed the anti-police brutality movement.”
They’re absolutely right.

Ritchie Torres has proven that, when it really comes down to it, he will not do what is needed to protect our community. Ritchie Torres does what’s best for Ritchie Torres – and that leaves a whole lot of people out. That’s not representation. That’s not what we want for The Bronx in Congress.

Ritchie Torres made an effort to betray this moment, where we stand together, fists raised against police brutality. He gutted legislation that would increase police accountability and would help make our communities safer.

These families took the brave step to come forward, to let people know what is really going on. “We’ve been through too much to let lying and opportunistic politicians like Ritchie Torres betray us and then seek higher political office.”
Posted by 100PercentBronx at 8:28 PM No comments:

Email ThisBlogThis!Share to TwitterShare to FacebookShare to Pinterest
Labels: Michael Blake - Families of Victims: Do Not Vote for Ritchie Torres

A significant number of constituents have said they are still waiting to receive their absentee ballots for the June 23 Democratic Primary election despite having submitted an application weeks ago.

Due to the COVID-19 pandemic, New York State temporarily authorized all eligible voters to apply for an absentee ballot for the June 23 primary and special elections based on “temporary illness” and instructed Boards of Election to automatically mail an absentee ballot application to all eligible voters. There have been numerous reports of voters saying they have not received their absentee ballots in the mail yet, even though they applied weeks ago. Only registered Democrats are eligible to vote in the June 23 primary for the 81st Assembly District because no other party is holding a primary election within this district.

There are three ways for registered Democrats in the 81st Assembly District to cast their vote in the June 23 primary election:

I have been in frequent contact with the Board of Elections and they continue to say that ballots have been mailed to eligible voters. I have been in contact with the United States Postal Service and they have said that they are not experiencing any backlogs of absentee ballots in their facilities. There will be time to figure out what went wrong after Tuesday, but the most important thing right now is to make sure eligible voters who wish to cast a ballot have created a specific plan to vote in the June 23 Democratic primary election.”

When candidates complained of getting late mail from the Board of Elections such as hearing notices after the hearings, The NYCBOE Law Department head clerk said that the BOE can't be held liable if the USPS can't deliver the mail on time.

Governor Cuomo: "Today, we have done a full 180, from worst to first. We are controlling the virus better than any state in the country and any nation on the globe. Even more, by reducing the infection rate, we saved over 100,000 people from being hospitalized and possibly dying, just think about that. It is an unimaginable achievement. I'm so incredibly proud of what we all did together, and as a community. We reopened the economy and we saved lives. Because it was never a choice between one or the other, it was always right to do both."

Cuomo: "I ask myself and today I ask you: Why did it take a crisis to bring us together? Why does government usually appeal to the worst in us rather than the best? Why do our politics today play to our fears and weaknesses rather than appeal to our strengths? Why doesn't government challenge us to reach higher and speak to our better angels? Why can't it motivate us by love rather than hate? Why doesn't government urge us to realize we are members of the same community, the same family? That we all benefit when we work together. Isn't that what we really showed over the past 111 days? That working together works. That the only way forward is if I protect you and you protect me. I wear a mask for you and you wear a mask for me."

Cuomo: "If you care for me and I care for you, we showed that in the end love does win. Love does conquer all. That no matter how dark the day, love brings the light. That is what I will take from the past 111 days. It inspires me and energizes me and excites me. If we could accomplish together what we did here, this impossible task, of beating back this deadly virus then there is nothing we can't do. We will be better and we will be stronger for what we have gone through. It shows us how capable we are when we are at our best. It shows us that we have great potential to do even more and we will."

"I am so incredibly proud of what we all did together and as a community. We reopened the economy and saved lives, because it was never a choice between one or the other, it was always right to do both," Governor Cuomo said. "We showed that works in New York. We owe thanks to so many people, to our heroes, the healthcare and essential workers, to our legislature, our colleagues in New Jersey, Connecticut and neighboring states, local governments, the Army Corps of Engineers and most of all, to the great people of the state who rose to the occasion and did what they had to do."

The City’s overall unemployment rate increased from 3.5 percent in February to an unprecedented 18.3 percent in May according to the Bureau of Labor Statistics (BLS) — with even higher rates among men, Asian-Americans, Latinos, and African-American New Yorkers. Roughly one out of every 4 workers of color are currently unemployed.

SOURCE: Office of the Comptroller from Bureau of Labor Statistics.

Data released by the Census Bureau’s Current Population Survey (CPS), which unlike the BLS data is not seasonally adjusted, shows a citywide unemployment rate of 19.9 percent. CPS data also indicated that the unemployment rate among men rose from 3.5 percent in February to 21.5 percent in May, while the rate for women rose slightly less sharply to 18.1 percent. Among Asian-American New Yorkers, the rate increased from 3.4 percent in February to 25.6 percent in May. The rates for Latinos rose to 25.1 percent and for African-American New Yorkers to 23.5 percent.

Change in Unemployment Rate, February to May, by Demographic Group

Change in Unemployment Rate, February to May, by Age Group

Change in Unemployment Rate, February to May, Foreign-Born Workers

Change in Labor Force Participation Rate, February to May, by Demographic Group