This came to us from Mr. Frank LaBoy, who was an ex-Press Aide to former Senator Pedro Espada Jr. 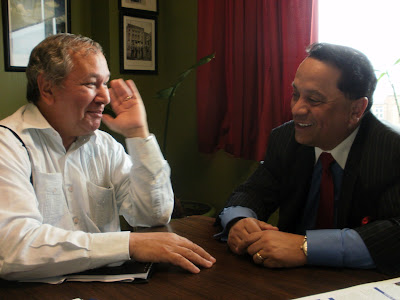 A former press aide to ex New York state senator Pedro Espada, Jr asserts the government is using a double standard against the indicted former senator, and his son.

Frank LaBoy, a former press secretary who broke ties with Espada in October, 2010 believes the government is relying too much on faulty bookkeeping, and press leaks in the news media tinged with racism, to bury the Espadas in their federal trial.

The erstwhile press aide who became a political foe of Espada's says: " I dislike sushi (raw fish) big time, and I drive a simple car that's not a Mercedes, but frankly, if someone likes sushi, enjoys driving a premium auto mobile, talks stridently, that does not make them a criminal. Mr. Espada, and his son have done nothing wrong except exercise their freedom of choice rights as free American men in a capitalist society. Why is it okay for a major presidential candidate to have personal funds in offshore accounts which are legally questionable for someone running for president of the United States- but it is somehow wrong to celebrate your grandson's birthday especially if you're savvy, capitalist, and happen to be Hispanic? Hispanics have no right to be successful like Mitt Romney without fear of being criminalized? You have to be kidding!"

LaBoy suspects the Espada's are victims of a protracted government witch hunt that resembles the persectution inflicted on the late Congressman Adam Clayton Powell, Jr. in eh latter part of the 1950s and 1960s, and the horrific prosecution and jailing of an innocent French general, Alfred Dreyfus during the late 19th Century.

" In the prosecution of these two historic figures (Powell and Dreyfus), wanton, flagrant bigotry played a huge role in their persecution by the government.
This is no different from the prosecution of the Espada's in this day and age, where they are held to up to constant ridicule, scorn, and disparaging dismissive condescension that masks what is really racism by the news media who appear obsessed with destroying people of color by criminalizing their behavior even when they practice the same standards of fiscal chicanery-capitalism that the media hides behind, but they peddle the drivel, and nonsense of celluloid "hollywood (with small letters) personalities" who contribute nothing to the American landscape except self destructive behavior that is really worrisome to the fabric of society in general."
Pedro Espada is undergoing criminal prosecution for being no-nonsense, for daring to be successful, for doing what the white boys' club has always done here in America, except that Espada is Latino, and criminalizing him is the cruel way the government feels it can put him, and other successful Latinos like Espada, in their place ...on the plantation of protracted government persecution for promoting capitalism in a Nation that has a very hard time defining right from wrong these days, but is obsessed with constantly criminalizing the community of Americans Males who are people of color, especially if they wear business suits, and are successful capitalists, business people, or deign to be successful, and use the same rules of business enterprise that Anglo- White businesses use every day", said LaBoy.

"If you are a Man and you happen to be Black, Latino, or from any group of racial minorities, you are likely to be racially-profiled for criminal prosecution, especially if you are a businessman, and enjoy a degree of notoriety. The New York state senate, and the Congress is rife with no-show jobs, and nepotism! Pedro Espada did not invent corruption. Politicians in Albany, and in Washington, D.C. hire relatives all the time, even girlfriends and boy friends, they do this every day, and have done so for over 200 years, and no one criminalizes them !
LaBoy believes the Espada's are being subjected to a double standard of prosecution and hypocrisy. "Do the Espada's have offshore, or Swiss bank accounts? No. But a major presidential candidate does, and that's okay. Nobody is convening a federal Grand Jury to inquire how a successful multi -millionaire with millions of dollars in wealth can run for President of the United States, keep funds in off shore banks, away from the long arm of the federal government, the IRS, and the Law, and not face any kind of scrutiny. That is a glaring double standard of justice if you ask me." concluded LaBoy.
*************************************************************

Baseball in The Bronx UPDATE


Dr. Cary Goodman (head of the 161st. Street Business Improvement District) and the children from the Highbridge Headstart formally announced "Baseball in the Bronx 2012". The Highbridge Headstart children were with Dr. Goodman last year as the 161st. Street BID launched its "Jeter Meter" that counted up to Derek Jeter's 3,000th hit. The Jeter Meter then later in the season became the "Mariano Meter" that counted up to the record breaking all time save number.
The Kids sang in the shadows of Yankee Stadium, "Take me out to the Ballgame", and and once again cheered "Derek Jeter". The event took place in front of D&J Variety located at  64 E. 161st. Street, and owner Mike Hong who has been there for 26 years said that the street is changing. Dr. Goodman said that stores leases are doubling and there is talk of redevelopment on the street. Dr. Goodman said that there might be one or two new twenty story buildings going up in the near future as the area has experienced a renaissance since the new Yankee Stadium opened, and also with the talk of a new hotel/convention center near the stadium that Bronx Borough President Ruben Diaz Jr. has spoken about.

BASEBALL IN THE BRONX:
NINE INNINGS OF BRONX BASEBALL


Exhibition and Public Programs at the Bronx Museum of the Arts open April 13, 2012

Celebrate nine innings of baseball in the Bronx with the 161 Street Business Improvement District at The Bronx Museum of the Arts (1040 Grand Concourse, at 165th Street) on Yankees’ Opening Day, April 13, 2012. Baseball in the Bronx will feature photographs, ephemera, and artifacts from across the borough and the decades. A series of talks and book signings with prominent sportswriters and historians, and a screening of the film Sugar (2008), will take place from April 15 – 30. During opening week, a free trolley will run between Yankee Stadium and the Bronx Museum. The first thousand visitors to the exhibition will get free Topps baseball cards. This one-month-only exhibition ends May 13, 2012.

“There’s never been anything like this,” said Dr. Cary Goodman, Executive Director of the 161st Street Business Improvement District, which organized the exhibition. “Visitors will be able to view Joe DiMaggio’s bat, Elston Howard’s Golden Glove, and see photographs of the Negro League World Series at Yankee Stadium. They can meet a movie star, talk to an ESPN broadcaster and learn about the history of Bronx baseball.”
Baseball has played a central role in the lives of Bronx residents for generations. People of all ages and backgrounds call the Bronx home and embrace the game. The sport and the borough grew simultaneously and both continue to evolve in the twenty-first century. Each of nine “innings” that make up the Baseball in the Bronx exhibition portrays a different aspect of the game. It begins with the Unions, who played in Morrisania in the 19th Century, and with Esteban Bellan, the first professional Latin American baseball player who was a student at Fordham University in 1863. The exhibit also includes material about:

• The history of Latino Baseball in El Bronx thru Club Cubano Interamericano of Melrose
• Bronx Little League teams from Hunts Point, Crotona, Riverdale and Van Nest
• College baseball at Fordham and NYU
• Baseball alumni from the Bronx
• The ninth and final inning of the exhibit features family photographs from the 1950s to the present day, submitted by the public through an open call.

PUBLIC PROGRAMS
Stop by the Bronx Museum of the Arts a few hours before the game to check out these authors, actors, and historical figures in a series of talks and book signings – and a film screening.
SPONSORSHIP
The exhibit is produced by the 161 Street Business Improvement District and The Bronx Museum of the Arts. Baseball in the Bronx is generously supported by The NYC Department of Small Business Services’ Avenue NYC Program, the New York Yankees Foundation, The Bronx Overall Economic Development Corporation, Bronx-Lebanon Hospital Center, and Sparrow Construction.

161 STREET BUSINESS IMPROVEMENT DISTRICT
The 161 Street Business Improvement District is committed to improving the community for those who live, work, visit, and shop on 161 Street in the Bronx. The BID’s goal is to keep the streets clean, promote commerce, and enrich the area through special events and cultural projects. Visit www.161bid.org for more information.

THE BRONX MUSEUM OF THE ARTS
Founded in 1971, the Bronx Museum of the Arts is a contemporary art museum that connects diverse audiences to the urban experience through its permanent collection, special exhibitions, and education programs. Reflecting the borough’s dynamic communities, the museum is the crossroad where artists, local residents, and national and international visitors meet. The museum’s home on the Grand Concourse is a distinctive contemporary landmark designed by the internationally-renowned firm Arquitectonica.

Email ThisBlogThis!Share to TwitterShare to FacebookShare to Pinterest
Labels: 161 Street Business Improvement District, BASEBALL IN THE BRONX:, Bronx Museum of the Arts

The Hebrew Institute of Riverdale  &

Invite You to Attend

The Hebrew Institute of Riverdale

“The redevelopment of this site, which will ultimately provide more than 130,000 square feet of retail, is certain to enhance the already thriving Broadway commercial corridor,” said New York City Economic Development Corporation President Seth W. Pinsky. “With a private investment of more than $50 million, this development will not only bring new amenities to the area, but most importantly, will create hundreds of new jobs for the Bronx.”

"Equity One is thrilled to be working with the New York City Economic Development Corporation and all of the local officials to bring this project to fruition.  We have a strong track record of successful development and look forward to leveraging our relationships with national tenants to bring an exciting mix of retail to this site," said Jeffrey S. Olson, CEO of Equity One.


There was a groundbreaking ceremony for the reconstruction of the basketball courts at Van Cortlandt Park's Classic Playground. The $162,000.00 project was funded in part by the city and the Courts of Dreams Foundation.
New York City Parks Commissioner Mr. Adrian Benepe, Bronx Parks Commissioner Hector Aponte, Congressman Eliot Engel, State Senator Jeff Klein, Assemblyman Jeffrey Dinowitz, and Ms. Natasha Cornstein (Co-founder & Chair, Courts of Dreams Foundation) were on hand to break ground for the new basketball courts.
Children from PS/MS 95 and PS 344 the two local schools that use Classic Playground the most were on hand to give a choral performance, after which there were some quick speeches, and then everyone moved over to break ground for the new basketball courts. You can see in the pictures below what occurred.


Mr. Dominick Broccoli opened his third Bronx I HOP Restaurant at 1001 White Plains Road at the corner of Bruckner Blvd. He already owns I HOP restaurants located on E174th Street, and on Allerton Avenue in the Bronx, both recently opened within the past few years. There is seating for 220 customers at the new White Plains Road I HOP, with friendly servers, and reasonable prices. At the official ribbon Cutting ceremony to help Mr. Broccoli were State Senators Ruben Diaz Sr. and Jeff Klein, Assemblyman Marcos Crespo, Community Board # 9 chairman Al Hayward, District Manager Francisco Gonzalez (with several other CB 9 members), and Community Leader Luis Sepulveda as pictured below. 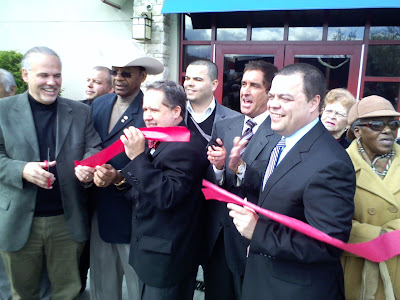 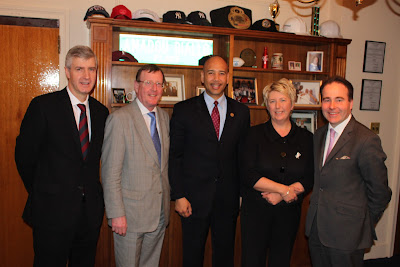