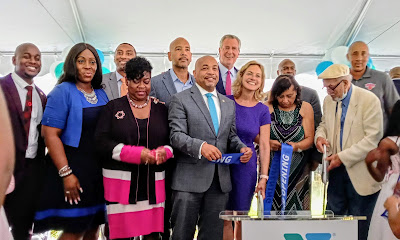 After my morning briefing, I rushed up to the Bronx to be with Assembly Speaker Carl Heastie, Bronx Borough President Ruben Diaz Jr. State Senator Jamaal Bailey, Bronx District Attorney Darcel Clark, Councilwoman and future Bronx Borough President Vanessa Gibson, Councilman Kevin Riley, Community leaders Alonzo de Castro and Shirley Fearon, Sharon Greenberger YMCA of greater NY President & CEO, Meishay Gattis Executive Director of this new Bronx YMCA, and former New York Knick John Starks, to cut this ribbon for this new YMCA that we helped make a dream, come true.
After all I didn't do for the Bronx while I have been your mayor, it made everyone feel much better that this new YMCA has the hopes as speaker after speaker said will give Northeast Bronx children opportunities they did not have before.
Posted by 100PercentBronx at 2:53 PM