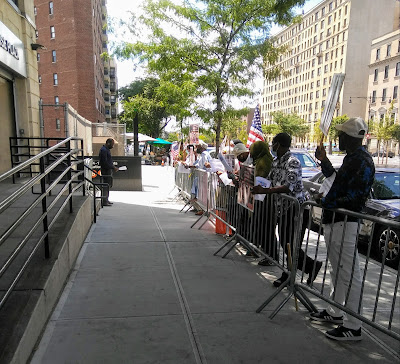 The problem seems to be that of the Board of Elections who originally had knocked off Mr. Diallo and other candidates on his slate in the 79th A.D. and in the 87th A.D. Both groups of candidates for Democratic Party positions then went to court and were placed back on the ballot. The Board of Elections then appealed that decision, but in doing so had to print up Absentee and official ballots for the Primary before they knew if their appeal would be upheld.

As it was said to this reporter by Ms. Valarie Vazquez-Diaz of the NYC Board of Elections "the ballots had to be printed up by a certain date, and the decision on the appeal by the Board of Elections was not decided by the date of the printing, so the names of the candidates in question in the 79th and 87th A.D.'s were placed on the ballots". Ms. Vazquez-Diaz also said at first, the ballots with those names on them would not count, telling me at a later time that only the votes for the non-candidates in the two A.D.'s would not count. The solution to the Board of Elections problem would have been that if you are going to print up official ballots with these names on them, then you withdraw the appeal to the names being on the ballot. In any case heads will roll at the BOE, and there are already several nervous people downtown and uptown in the Boogie Down Bronx.

State Senator Luis Sepulveda has filed a lawsuit against the Board of Elections and several candidates who were on the ballots. While Sepulveda has a semi-comfortable lead himself, his Female District Leader in the 87th A.D. has a lead of only nine votes. It appears that there may be a battle for the current vacant Bronx Democratic County Leader position, and it is the district leaders who vote for the county leader every two years. Counting of the ballots in the 87th A.D. begins Thursday July 16th.

Email ThisBlogThis!Share to TwitterShare to FacebookShare to Pinterest
Labels: Protest Outside Bronx Board of Elections to Count all the Votes that Were Cast on Primary Day and on the Absentee Ballots