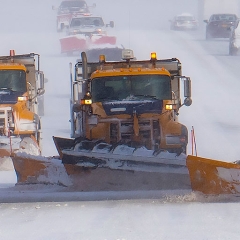 Areas Within the New York City, Long Island and Mid-Hudson Region Could Receive Up To Six Inches of Snow with Rates of One Inch or More per Hour at Times

Governor Kathy Hochul today urged New Yorkers to use caution and avoid unnecessary travel in several parts of the state as two weather systems are expected to produce snow and gusting winds in multiple regions, causing snow and ice-covered roads, low visibility, and potentially dangerous travel conditions through Friday morning. Western New York and the North Country are expected to receive more than a foot of lake effect snow through Friday, with wind gusts up to 40 mph, causing whiteout conditions at times. In the New York City, Long Island, and the Mid-Hudson Regions, up to six inches or more of snow is expected in some locations with winds gusting up to 40 mph. Given the forecast, New Yorkers, especially those in downstate regions, are being encouraged to utilize mass transit for commutes.

"With more heavy snow and high winds in the forecast, I'm encouraging New Yorkers to stay off the roads and be prepared for dangerous travel conditions" said Governor Hochul. "Areas in Western New York and the North Country are already experiencing lake effect snow and we're anticipating up to six inches of snow in Downstate regions between tonight and tomorrow morning. Please avoid any unnecessary travel to keep yourself safe and to help our maintenance crews out on the roads clear our highways and bridges quickly and safely."

Governor Hochul directed state agencies earlier this week to prepare emergency response assets in anticipation of storm-related impacts in several regions. On Thursday morning, the State Department of Transportation closed the Buffalo Skyway (State Route 5) from Ridge Road to Church Street in the City of Buffalo due to poor visibility as a lake effect band delivered several inches of snow per hour.

For areas in Western New York and the North Country, lake effect snow will continue Thursday through Friday night with snow totals reaching a foot or more in some locations. Areas in New York City, Long Island and the Mid-Hudson valley will see up to six inches of snow and high winds at times through Friday morning, causing dangerous travel conditions especially during the Friday morning commute.

Multiple weather warnings and advisories have been issued across the state for heavy snow and high winds, as well as lakeshore flooding for Jefferson and Oswego until Friday afternoon. For a complete listing of weather advisories in your area, visit the National Weather Service website.