As homelessness spending reaches all-time high and homeless population continues to soar, City fails to adequately track outcomes or fully oversee providers in key program
HRA failed to review two-thirds of Homebase case files and delayed fiscal audits and recoupments of contract advances -- including more than $2.2 million in advance payments
In the midst of New York City’s homelessness crisis, Comptroller Scott M. Stringer today released a concerning new audit revealing the City’s weak oversight of the its $53 million-per‑year Homebase Program, which is intended to help families and single adults overcome housing crises, avoid homelessness, and achieve housing stability. The Comptroller’s audit exposed failures by the City’s Human Resources Administration (HRA) to adequately and promptly review Homebase providers’ case files and to promptly alert them to correct the deficiencies it finds. Further, HRA’s incomplete tracking of clients who repeatedly return to the Homebase program for services and financial assistance after their cases are closed, combined with inaccurate program records, undercut the City’s ability to assess the effectiveness of the Homebase program and the individual providers. The audit also revealed lengthy delays in HRA’s fiscal reviews of its Homebase contracts and its failure to recoup more than $2.2 million in advance payments 16 months after one group of Homebase contracts ended.
“We are in the middle of a mounting homelessness crisis, with thousands of families struggling in our shelters. While the City is spending more money than ever before on services that are supposed to help people overcome and prevent homelessness, we are not seeing the reductions in homelessness that we should. This audit presents a damning example of the poor management and failures that plague the City’s approach to this ballooning crisis,” said Comptroller Stringer. “There’s a human cost to the City’s failures. If we don’t keep track of the resources that are intended to help vulnerable New Yorkers, the very people we must lift up fall through the cracks. In the fight against homelessness, every penny counts. The City needs to step up and ensure these programs are working and that no dollar is being wasted.”
The Homebase Program is a City-administered homelessness prevention program operating out of 26 locations across all five boroughs. It primarily serves households whose income is below 200 percent of the federal poverty level for families with children or 30 percent of Area Median Income for adult households who are at risk of homelessness or who have recently left the shelter system.
The administration of Homebase was transferred from the Department of Homeless Services (DHS) to HRA in January 2017, during the scope period this audit covered. However, a majority of the staff in leadership roles overseeing the program have remained the same. HRA currently has Homebase contracts with seven non-profit organizations: Help USA, Bronxworks, Catholic Charities Community Services Archdiocese of NY (ARCHNY), Catholic Charities Neighborhood Services (CCNS), CAMBA, Rise Boro Community Partnership; and SUS Urgent Housing Programs.
HRA’s Inadequate Case File Reviews
The Comptroller’s audit found:
Information Missing from Homebase Providers’ Case Files
The Comptroller’s auditors also visited 5 of HRA’s contracted Homebase providers and found that 17 of 50 sampled client case files they maintained were either missing required documents or lacked required information.
The deficiencies found in the Homebase contracted providers’ sampled case files are detailed in the table below: 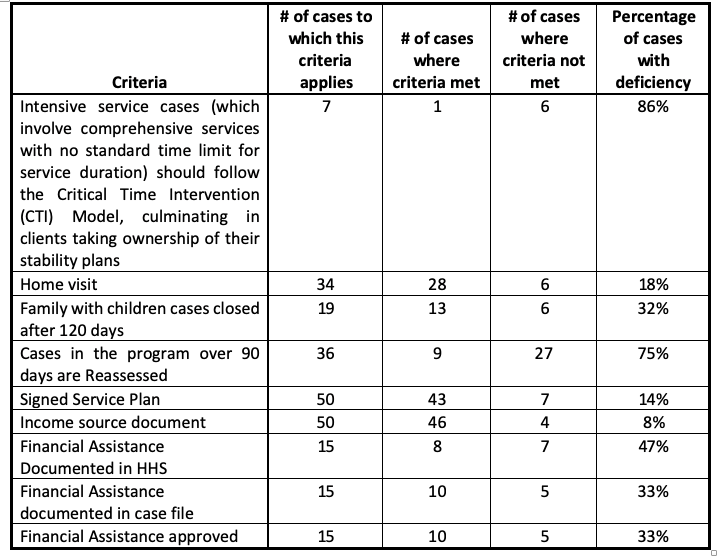 The Comptroller’s auditors also identified additional issues in the providers’ case records, including some that were particularly concerning. For example, according to the providers’ records, 5 of the 28 homes they visited were found to be not habitable.  However, the Comptroller’s auditors found no evidence that the conditions relating to four of those five homes were fixed by the landlords while the Homebase clients continued to reside there. These cases included one where the provider’s case manager observed a rodent infestation, mold or mildew, a water leak and broken windows during the home visit.
In addition, for 27 Homebase cases that remained open longer than 90 days, including 17 cases that were in the program for more than 120 days, up to 270 days, the files contained no evidence that the providers had reassessed the cases as required.
Incomplete Tracking of Homebase-Case Outcomes
HRA does not fully track clients who return to the Homebase Program in ways that could enhance its ability to evaluate the services provided. Clients who return to Homebase for assistance with a new housing crisis are allowed to open a new Homebase case. The Comptroller’s Office found:
Failure to Recoup Advance Payments
The audit found that HRA does not follow its own procedures to recoup advances. For example, the Comptroller’s Office found:
HRA Does Not Ensure Timely Audits
The Comptroller’s audit found:
In response to the findings, Comptroller Stringer made 19 recommendations, including calling on HRA to strengthen its monitoring controls to ensure that it conducts two formal case file review cycles annually and to ensure that its case file review summaries are scrutinized for accuracy and sent to the providers in a timely fashion. The Comptroller also called on HRA to improve tracking of the clients who return to the Homebase Program after their cases are closed to better measure the effectiveness of services the City is providing New Yorkers enrolled in the program.
To view the full audit and recommendations, click here.
Posted by 100PercentBronx at 8:12 PM