Does Samelys Lopez Really Know What the Population is?, and Why Does She Still Refuse to be Interviewed By Us? 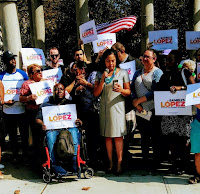 Samelys made a guest appearance on Hot 97’s Ebro in the Morning show to demand that Governor Cuomo appoint an Afro-Latina/o or  Latina/o to the NYS Independent Redistricting Commission. The commission is responsible for drawing new legislative and congressional district lines every ten years. While Afro-Latina/o and Latina/o New Yorkers make up nearly 20% of New York’s population and 66% of that of the South Bronx. (Taken from a press release dated May 11, 2020 by the Lopez for Congress campaign)

Let's go to the video tape (view the video here) where candidate Samelys Lopez says (at the 55 second mark on the tape) "A lot of Latino's in New York City and New York State 66% of the community is Latino". There is no mention of the South Bronx.

We would like to interview 15th Congressional candidate candidate Samelys Lopez on this misstatement she states on Hot 97 radio, but she refuses to be interviewed by us.

It is unfortunate that we have not been allowed from the day Samelys Lopez announced her candidacy to ask her any questions, even after her consultants said we could have an interview that day. The consultants were fired shortly after the announcement, which we also wonder why.

Email ThisBlogThis!Share to TwitterShare to FacebookShare to Pinterest
Labels: and Why Does She Still Refuse to be Interviewed By Us?, Does Samelys Lopez Really Know What the Population is?