As he opened the meeting 49th Precinct Community Council President Joe Thompson said that he hoped that he could continue with live meetings to inform the public about what was going on in the 49th Precinct.

Captain Natiw said that he was nearing the close of his second year as the commanding officer of the 49th Precinct. He went over the CompStat report for the previous twenty-eight days saying there was a total decrease in crime by over ten percent. He added that GLA (Grand Theft Auto) is higher than last year with a major cause being people are double parking to run into a store and leave their car running. A person will jump into the car to use it to go where they would have had to pay for a ride.

Captain Natiw gave the Cop of the Month award to Police Officer Germaine Peart for his excellent work on a case involving a couple and a gun that was recovered, and found to be used in a robbery. The pair are now in jail. Crime Prevention Officer Tyrone Mederos spoke, warning of new scams that are targeting senior citizens. He said calls, text messages, or emails are being used to say a loved one is in jail, and thousands of dollars in cash cards need to be sent to a certain location or the pin numbers via text or email. He said no government agency will ask for cash cards in lieu of payment.

After some community organization and elected official reports, having no more business the meeting was adjourned by President Thompson. The captain, and his community affairs officers remained to answer any private questions. 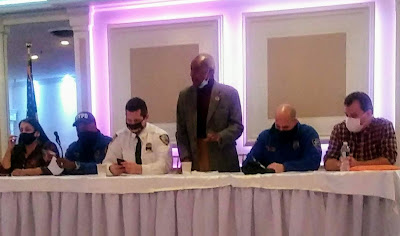 Below - Captain Natiw going over the CompStat report. 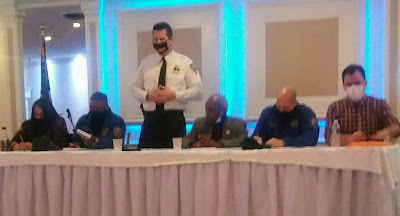 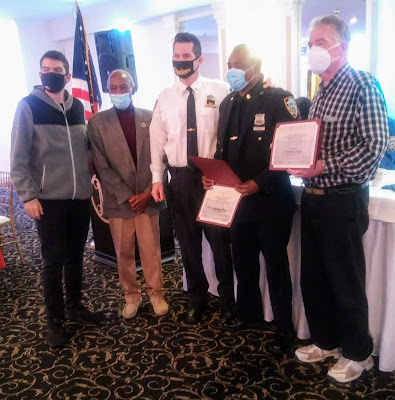 The Cop of the Month Award to P.O. Peart.