Just as one Gaffe may have cost soon to be former Congressman Eliot Engel in his congressional race, the same may be happening in the 80th Assembly District race in the General Election. The current Assemblywoman may have her own Gaffe when she announced her intention to run for Bronx Borough President while in the midst of a real race for her assembly seat in the ongoing general election.

Mr. Gene De Francis, a well known community leader, head of the Allerton International Merchants Association, and officer of the 49th Precinct Community Council who is running for the 80th assembly seat is calling out the current assembly member from the 80th A.D. who he says is ignoring the fact that she is running for the assembly while she campaigns for the office of Bronx Borough President.

Candidate Gene De Francis says he wants to represent the district that will be left without a representative while his opponent campaigns for Bronx Borough President. He says there are problems with the public schools, public transportation, NYCHA houses, businesses that are closing, and many other quality of life issues his opponent chooses to ignore to seek another office.

He opposes any cuts to the police department which his opponent endorses, and his opponent has openly showed by leading a rally through the streets of the 80th Assembly District that seemed to be a good idea for someone who wants to run for Bronx Borough President.

Political experts now have this race at a dead heat that could go either way. One thing that helps candidate Gene De Francis is that the 80th Assembly District is much less socialist leaning than other parts of the Bronx or New York City. He should be able to garner votes with his running mate John Cummings who is running an anti socialist campaign for the 14th Congressional District against the current socialist incumbent.

There are now facts coming out about the loss of the current Assemblywoman's  former Male District Leader that the current assemblywoman has admitted she could have done a better job of helping him in his campaign. That now former district leader has been the Chief of Staff to what will be one of her leading opponents in the Bronx Borough President's race. Gene De Francis says he can do a better job in serving the people of the 80th Assembly District than his opponent the current incumbent, who he says also could have done a better job for the people of the 80th Assembly District. 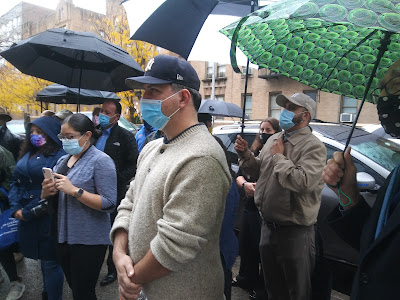 Candidate Gene De Francis and incumbent Assemblywoman Nathalia Fernandez as they stand with the crowd of community leaders at the grand opening of the NIDC new office 10-28-2020.