What is going on at the Board of Elections? Bronx Special Elections 2021.Part 2 Bronx Science High School Poll Site 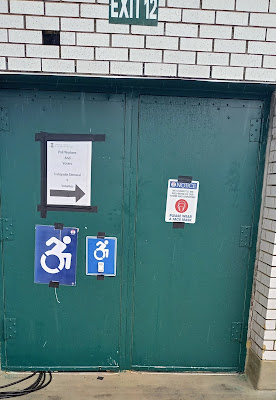 This is the entrance to the Bronx Science High School early voting poll site. It is down an alleyway from Goulden Avenue and around to the side. On a nice Saturday the first day of early voting the right door was wide open, but on a cold rainy Thursday afternoon March 18th it was closed. The sign says Handicap entrance, and for voting to use the right door, which was closed. There are no door handles to open the doors, or any other signs to tell the voter what to do to get in to vote.
I knocked the door a few times so someone would come to open it, nothing. I banged on the door a few times, nothing again. Imagine if I was a voter and was trying to vote not knowing if the poll site was open, since there were different times on different days to vote early. The voter would have left, and I don't know if any or how many people did not vote that day because the door was closed, due to no answer to open the door. I knew the poll site was open so I decided to give the door a few foot bangs so someone would hear it. Someone finally came and said why am I kicking the door, I replied that the door was closed, no one heard the hand knocks or hand bangs, and I could not get in.
I went to the Coordinator's table to sign both logs, and was asked for my official BOE media ID, which I showed. A different person came over asking to photograph the papers, and again I said that does not happen, and proceeded to walk to the ballot scanners to copy down the vote totals, and leave. The poll worker at the first scanner said they were instructed to block the machine from me. I called the number on my authorization letter (if there were any problems), and I was talking to the secretary of the Executive Director of the BOE when I was asked to leave the poll site. When I went into the vestibule to continue my conversation I turned around to see two police officers from the 52nd Precinct enter, and had to hang up on my call. I asked if the police officers were going to arrest me so I could sue the Board of Elections and retire. Officer Goris and his partner (both who knew me from my job and community work in helping Bronx precincts) said no, and asked me what was the problem. I showed the two officers the authorization from the Board of Elections, told them I had signed in, and was there to just copy down the number of votes cast on each ballot scanner. They went in to talk to Mr. David Agront, the Democratic poll coordinator said I could go to the ballot scanner to copy down the vote count, which I did and left.
As soon as I got to my car I called the Bronx Board of Elections and asked to talk to the Deputy Chief Clerk Ms. Brendaliz Candelaria to lodge a complaint against poll coordinator David Agront, and tell Ms. Candelaria my experience at the Bronx Science High School poll site for the second time in two visits. Ms. Candelaria apologized to me once again, saying that the poll coordinators know that I have authorization which she even told them. She added that the door should be open, and she will call the poll site to have it opened, and if it is to cold, to have a person standing right next to the door to open it when anyone comes to it. I then called the Executive Director's office of the citywide BOE to explain to the woman I had to hang up on exactly what went on at the poll site, and what Bronx Deputy Director Candelaria told me.
Watch for Part Three over the weekend.

Poll coordinator David Agront covering his face inside the Bronx Science High School poll site.
Posted by 100PercentBronx at 2:24 AM

Why is he covering his face if he did nothing wrong. Everyone knows these poll workers need to be monitored closely especially since discrepancies are always happening. When will they learn?