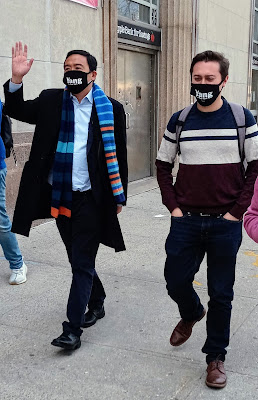 Mayoral candidate Andrew Yang came to Westchester Square Friday to give out food bags, but wound up holding a press conference, then left after bringing some bags of food to the table set up on the sidewalk in front of the Huntington Library. There were many reporters who wanted to ask candidate Yang several questions now that he has become the leading candidate according to recent polls.

My question to Mayoral candidate Andrew Yang was about the proposed two, two-hundred bed Single Adult Homeless men's shelters proposed only blocks from the Westchester Square Business District. I said that Community Board 11 was responsible for 748 homeless people, and the two Single Adult men's shelters would account for over fifty percent of the boards requirement when DHS had a formula of no more than twenty-five percent allocation of Single Adult Males candidate Yang did not know what I was talking about. I added that Community Board 11 where both were to be built, the second one by a developer who was a big contributor to the Bill de Blasio campaign, I said what will Mayor Yang do to stop the second Adult Men's 200 bed shelter? I could see that candidate Andrew Yang knew nothing about the homeless situation and in my opinion will make a mayor just like Bill de Blasio if not worse, as he tried to bluff his way through my question.

Candidate Yang attempts to answer my question on two, two-hundred bed Single Adult men' Shelters near Westchester Square in CB 11, showed that he knew nothing about the homeless problem in New York City. 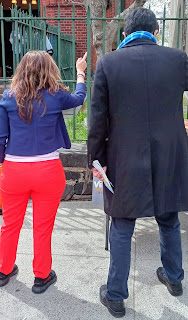 Candidate Yang is being showed the historical importance of the Huntington Library by a Community Board 10 member where the library is located.

Mayoral candidate Yang talks to one of a few people who passed by.
Posted by 100PercentBronx at 10:35 PM