Wednesday Night the Morris Park Community Association held its bi-monthly meeting. This meeting was to give the Columbus Day Parade committee a pat on the back for doing what turned out to be a very good job considering all the obstacles that had to be overcome, including the rain that turned heavy during the parade. Mayor Bill de Blasio marched in the parade, and Al D'Angelo president of the MPCA said he kept smiling even as the few detractors booed or hurled other comments at him. Al also said that the mayor assured him that work would restart on the revamping of the baseball/softball field.

Assemblywoman Nathalia Fernandez was on hand to answer questions, and remind everyone of her upcoming Job Fair in the cafeteria of Columbus High School on Saturday October 23rd, which she added was the first day of early voting for the November general election. The NCO officers from the 49th Precinct were on hand to remind everyone of crime safety tips when parking cars, do not leave your car running to run into a store, as someone can just hop into your car as you go in. They also mentioned that there were two car jackings in their sector, but no one was hurt. 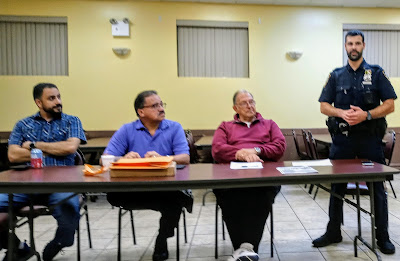 49th Precinct NCO officer Brancatelli (one of the Columbus Day Parade Grand Marshals) gives the sector A report to the MPCA.

Assemblywoman Fernandez gave out information, and took questions from the audience on many different subjects. She mentioned her Job Fair Saturday at Columbus High school, and explained why she did not march in the Bronx Columbus Day Parade.