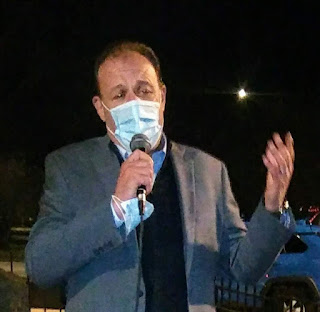 Councilman Mark Gjonaj has decided not to run for re-election, and return to the private sector. In an interview with City & State Councilman Gjonaj said that he was elected to serve his district which is different from other council districts as New York City evolves. “The current political climate is not favorable to a centrist ideology that my constituency, community and I embrace.”

Mark Gjonaj was first elected to the New York State Assembly in 2012. He was the first Albanian-American elected to elected office in New York. He then ran for the term limited seat of former Councilman Jimmy Vacca in 2017 defeating four other candidates in the Democratic Primary, and winning the November general election.

Those who were against Gjonaj had said there was wrongdoing by him, but nothing came from that except bad publicity as no charges was brought against him by the council. Gjonaj attributed that to Anti-Albanian racism.

In a statement Mark Gjonaj said, “As a proud Albanian-American and son of immigrant parents, I am not a stranger to being the subject of ethnic stereotypes and tropes,” Gjonaj wrote in his statement announcing his decision not to run. “As a minority ethnicity that has been subjected to ethnic cleansing, communist tyranny, foreign influence and occupation, and continued discrimination and prejudice, I have been genuinely surprised at the pervasiveness in which ethnic smears have been used as tools in an attempt to damage both myself and my community… I will not allow myself to be used as a weapon to divide the district or be used to tarnish a community or ethnicity.”