Cardinal Dolan Celebrates Holy Thursday with Blessing for New Yorkers; Presides at Opening of Low-Income Housing and Food Distribution in the Bronx

Cardinal Timothy literally jogged into the courtyard at 1932 Bryant Avenue on Holy Thursday to Bless and open the 319 unit low income housing building called Second Farms being in the West Farms area of the 17th Council District. Cardinal Dolan with Bronx Borough President Ruben Diaz Jr., and Councilman Salamanca and members of the construction team were on hand. This is the first of six new low income housing projects around the Bronx by Catholic Charities, that are on part of current or former Catholic Church property.
Second Farms is made up mostly of low income housing with ten percent of the apartments that were set aside for homeless people. That would account for thirty-two  of the 319 apartments. One such now formerly homeless person Emily, thanked Cardinal Dolan, BP Diaz Jr., and the rest of the team for her new modern apartment. 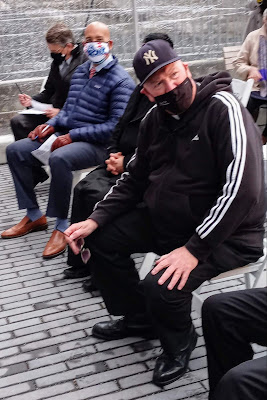 Cardinal Dolan Blessed the newbuilding at 1932 Bryant Avenue, complete by Sprinkling some Holy Water on the building.

Cardinal Dolan holds the second box of food that was given out to each person, as Bronx BP Diaz Jr. places this first box into this woman's cart.

All the work of b\Blessing the new building and handing out boxes of food, did not stop Cardinal Dolan from stopping to bless people individually.