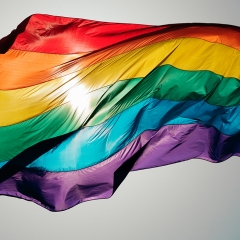 Governor Kathy Hochul tonight spoke at the LGBT Community Center 2022 Dinner and announced major advancements in equity initiatives for the LGBTQ+ community as part of the enacted FY 2023 State Budget. The Budget includes $13.5 million for the Department of Health to support the LGBTQ+ community and more than doubles annual LGBTQ+ Health and Human Services funding. It also requires all state agencies that collect information about a person's gender to provide an option for people to mark their gender as 'X' on state forms and include that information in data collection. The budget also enables transgender New Yorkers to change their names or gender designations on marriage certificates without leaving their dead names on them.

"The work of The LGBT Center is essential in providing a space of value, love and belonging for members of the LGBTQ community, especially queer and trans people of color," Governor Hochul said. "The past two years have been hard for us all, but especially hard for LGBTQ+ New Yorkers who have always been forced to deal with levels of isolation due to homophobia and transphobia. That's why it's so important that our newly enacted budget presses forward in the fight for equality with historic levels of state funding and initiatives for LGBTQ+ equity."

The FY 2023 Budget includes $13.5 million for the Department of Health - an increase of $8 million over the prior fiscal year - to support the LGBTQ+ community and network of providers, with direct health services, cultural competency education and training, organizational capacity building and transgender wellness initiatives. This increase acknowledges the lifesaving work of organizations that serve LGBTQ+ New Yorkers, as well as the additional challenges faced by transgender, gender non-conforming, and non-binary community members.

Even after the passage of the Gender Expression Non-Discrimination Act (GENDA) in 2019, advocates have come forward to speak about the obstacles transgender individuals have faced trying to get a complete name change on their existing marriage certificates. The options available to this community have been to leave the dead name crossed out on the certificate or to get divorced and remarried.  In the Governor's first budget, she enacted legislation to rectify this issue and create an appropriate and affirming way for transgender individuals to change their names or gender designations on their marriage licenses.

In addition, the Budget included legislation requiring state agencies to provide an option for individuals to mark their gender or sex as a non-binary "X" on all state forms that collect gender or sex information beginning on January 1, 2023. The Department of Labor, Office of Children and Family Services, Office of Temporary Disability Assistance and Division of Criminal Justice Services will have until January 1, 2024. Agencies that are unable to meet the deadline will have to be transparent about their efforts to comply with this policy by posting a public report. With the enactment of this bill and the marriage certificate name change, New York remains a national leader  in ensuring that state records and identification documents truly reflect an individual's identity.

The Budget also invests $12.5 million — an increase of $3.7 million over the prior fiscal year — to support the Division of Human Rights' efforts in protecting New Yorkers, including the LGBTQ+ community, from unlawful discrimination based on who they are. The Division of Human Rights uses investigation, prosecution, and education to enforce and promote the Human Rights Law, which prohibits discrimination based on sex, sexual orientation, gender identity or expression, marital status, age, race, national origin, disability, and other specified classes.

The FY 2023 State Budget also directs $25 million for Securing Communities Against Hate Crimes (SCAHC) grants. Additionally, benefits will be expanded for victims of hate crimes, who will now be able to obtain up to $2,500 in reimbursement - an increase of $2,000 from past years.

The Division of Human Rights will create a Hate and Bias Prevention Unit, first announced in Governor Hochul's State of the State Address, to provide a coordinated, rapid, and community-focused response to hate and bias incidents. The unit's general charge will include leading efforts around public education and outreach, serving as an early warning detection system in local communities, and rapidly mobilizing to areas and communities in which a bias incident or incidents have occurred.

The New York State Lesbian, Gay, Bisexual and Transgender Health & Human Services Network (The Network) is a coalition founded in 1994 and administered by The Center, consisting of 71 LGBT-specific and LGBT-supportive nonprofit organizations that provide care to LGBT New Yorkers and our families.

Network members support and learn from each other, help build capacity and increase their ability to foster a safer and more supportive state for all LGBT people. For example, recognizing that many transgender clients have varied life experiences—many of which involve a combination of racism, classism and trans- or homophobia—The Network works to improve the quality of resources and care that each organization can offer to this community.