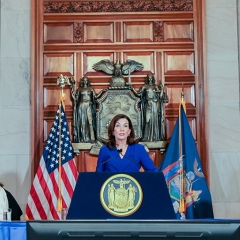 "Today, President Biden and the Department of Justice announced additional steps to crack down on ghost guns, including making "buy, build, shoot" kits subject to the same federal laws that apply to other firearms. I applaud President Biden for closing this loophole that threatened the safety of our communities, and I want to thank the President for his ongoing partnership. No one should be able to circumvent the process to gain access to deadly weapons, especially those that take just 30 minutes to assemble and whose parts often cost less than $100. Just last week, three teens were shot and one was killed while walking home from school in the South Bronx with what police believe was a ghost gun.

"We are seeing a significant increase in the number of ghost guns used in deadly shootings across our state. That's why in October, I took action to criminalize the sale of ghost guns and require gunsmiths to register firearms they assemble. I also established a nation-leading Interstate Task Force on Illegal Guns, bringing together ten states, federal agencies, and local law enforcement agencies. The Task Force is having an immediate impact, taking hundreds of guns - including ghost guns - off the streets each month.

"We are treating gun violence as the public health and safety crisis that it is, devoting a historic $227 million in our FY2023 budget for gun violence prevention programs that aim to address the root causes of this epidemic. I pledge that we will continue to work with our partners at the local, state and federal levels to crack down on the distribution and possession of dangerous weapons, get guns off our streets, and save lives."