Friday May 20th was the 49th Precinct 33rd Annual Fellowship conference Breakfast, after a two year hiatus due to COVID. While the awards were still mostly the same, there were many changes in the people up front. While Joe Thompson was still the 49th Precinct President, the new commanding officer of the 49th Precinct Captain Gareth Kentish was away at training, so Executive Officer Captain Gross stood in for him. Honoree, former Commanding Officer now head of the Manhattan North unit Deputy Inspector Andrew Natiw also was at training. As for the elected officials, New Bronx Borough President Vanesa Gibson and New 13th City Council member Marjorie Velazquez were on hand for the event hosted by the 49th Precinct and 49th Precinct Community Council. 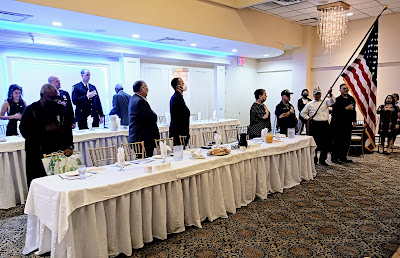 The flag is brought in for the singing of the National Anthem. 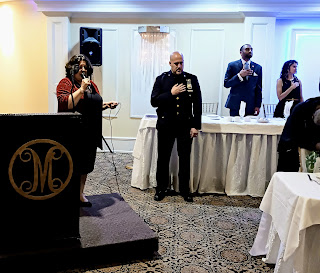 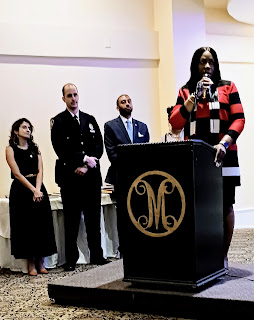 Bronx Borough President Vanessa Gibson spoke about her short time as Borough President, some of the many issues that she has faced, and thanked the men in blue for being there when they are needed. Captain Gross stands between the elected officials. 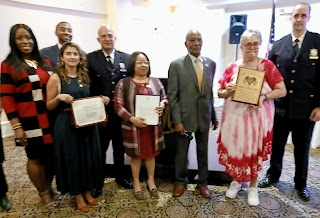 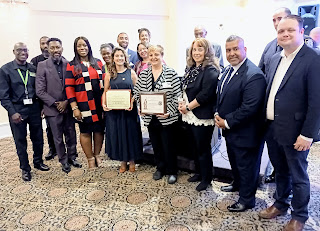 Jacobi Medical Center received the Business Fellowship Award for their outstanding work in the medical field, the SUV unit, and other community involvement. Jacobi CEO Jordana Bailey holds the award, with staff members of the hospital including John Doyle. 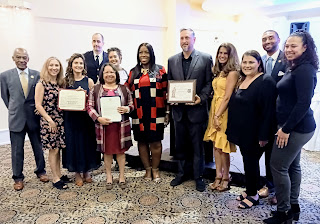 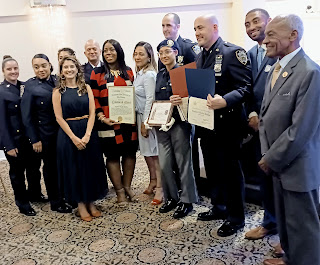 Nadia Medina received the award as the Explorer of the year.
Posted by 100PercentBronx at 1:11 PM