Department of City Planning (DCP) Director Dan Garodnick today released Assessing New Yorkers’ Access to NYC’s Waterfront, a report that chronicles which waterfront communities offer good public access to the shore and those where access is more limited – and an update to DCP’s Waterfront Access Map. The map, which features profiles and helpful information on all of New York City’s waterfront public open spaces, and the report together emphasize the City’s commitment to making public access to the waterfront much more equitable.

“New York City’s waterfront is one of our best assets – a source of fun, relaxation, transportation, work, and much more. Every New Yorker should be able to reach and enjoy our shoreline and experience all it has to offer. This map and report lay out how people are accessing the waterfront, and how we can do even better. Both are important tools in our ongoing march towards a more equitable shoreline and city,” said DCP Director Dan Garodnick.

“As the stewards of much of New York City’s diverse waterfront—from natural areas to beaches to esplanades—we understand the importance of expanding and promoting equitable waterfront access for all New Yorkers,” said NYC Parks Commissioner Sue Donoghue. “We applaud the Department of City Planning for developing this user-friendly map and publishing this thoughtful analysis supportive of efforts to connect residents to their open spaces along the waterfront.”

The report and map were released on 5/20 as part of DCP's annual celebration of NYC’s 520-mile-long shoreline, highlighting City efforts to better connect New Yorkers to our expansive waterfront.

Using detailed walkability and transit analyses, the report found nearly three million New Yorkers live within a half-mile of the waterfront and that approximately two million of them live within walking distance of a waterfront park or open space. The remainder, about 800,000 people, do not. The report also found that more than 80% of New York City 8.5 million residents are just a 30-minute bus or subway ride away from the waterfront.

The report was done to support efforts by DCP, other city agencies, and open space advocates to expand access to the waterfront – and especially to close accessibility gaps in historically underserved communities. Expanding public waterfront access means more space for New Yorkers to exercise, relax, and interact with nature, and, more generally, be healthy.

The report highlights recent waterfront open space that successfully expanded public access in underserved areas, such as the North Shore of Staten Island and the Bronx’s Harlem River waterfront, and highlights how DCP’s Comprehensive Waterfront Plan addresses long-term strategies for expanding waterfront public access across the city. Achieving equity in access to the waterfront requires addressing physical barriers, such as highways, that have cut off communities from their own shorelines for decades. 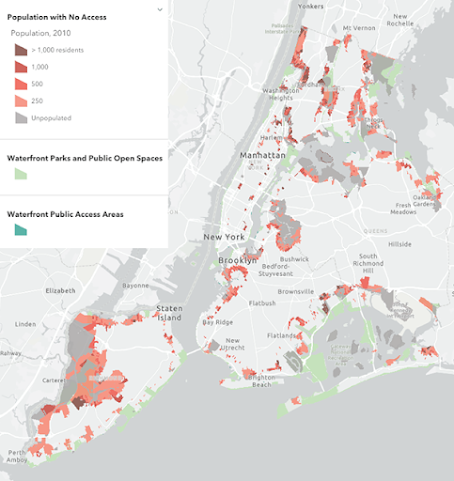 First released in 2018, DCP’s Waterfront Access Map offers New Yorkers easily accessible information about the many access points to the waterfront and across all five boroughs. The map highlights public parks and open space created along the waterfront since 2018, such as West Farms Park in The Bronx and Shirley Chisholm State Park in Brooklyn. The map also includes 300,000 square feet (or over seven acres) of recently certified Waterfront Public Access Areas – required publicly-accessible space along the waterfront that is built and maintained by private developers of medium to high-density buildings.

It provides details on where and what type of amenities are available – so how to locate boating and in-water recreation opportunities, volleyball courts or fishing spots – and which transit options, such as bike, ferry, or subway routes, are near the publicly accessible shoreline of your choice. It allows the public to easily filter the data by features, like outdoor art exhibit or a dog run. It also offers information about how these open spaces were created and how they are maintained.

“New York’s waterways are the largest public resource in the nation’s greatest city,” said Robert Pirani, Director of the New York – New Jersey Harbor & Estuary Program at the Hudson River Foundation. “But not everyone can access the health-giving recreation, nature, and open vistas they offer. By documenting who can and who cannot easily get to the waterfront, the Department of City Planning’s maps and reports help us all as we seek to address this challenge.”

“From Orchard Beach to Breezy Point to the North Shore of Staten Island, the new and improved Waterfront Access interactive map helps New Yorkers find waterfront access points and amenities at hundreds of waterfront parks and open spaces along the city’s 520 miles of shoreline. While we celebrate the many new waterfront access points created in recent years, some communities do not have adequate access due to former industrial sites on the water, zoning, and a history of disinvestment in underserved communities. Moreover, opportunities to physically engage with the water through recreational boating and even swimming are very limited across New York City,” said Karen Imas, Vice President of Programs, Waterfront Alliance. “We commend City Planning for exploring pathways to open new waterfronts and connect communities to local waterfronts. There are still miles of coastline entirely unused and cut off from communities and we look forward to working with the City of New York to bring all the benefits of open space, green infrastructure, and recreational opportunities to those communities that need them the most.”

The Waterfront Access Map is one of DCP’s many web products that reflect its commitment to increased accessibility and transparency for the public through well-designed, open source, web-based tools.

Department of City Planning
The Department of City Planning (DCP) plans for the strategic growth and development of the City through ground-up planning with communities, the development of land use policies and zoning regulations applicable citywide, and its contribution to the preparation of the City’s 10-year Capital Strategy. DCP promotes housing production and affordability, fosters economic development and coordinated investments in infrastructure and services, and supports resilient, sustainable communities across the five boroughs for a more equitable New York City.

In addition, DCP supports the City Planning Commission in its annual review of approximately 450 land use applications for a variety of discretionary approvals. The Department also assists both government agencies and the public by advising on strategic and capital planning and providing policy analysis, technical assistance and data relating to housing, transportation, community facilities, demography, zoning, urban design, waterfront areas and public open space.