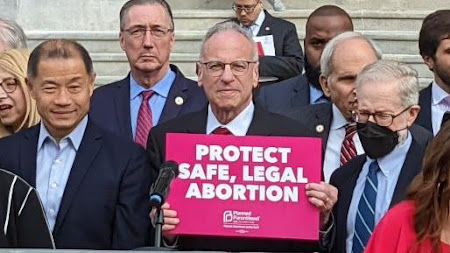 Dear Neighbor:
You likely have heard about the leaked draft decision from the Supreme Court of the United States which would overturn nearly fifty years of precedent on a woman's right to choose whether or not to have an abortion. This decision, which is not official at this time, would allow each state to once again determine their own policies on the termination of pregnancies.
I am absolutely incensed at this apparent decision from the Supreme Court, which follows years of overt politicization of our Supreme Court appointment process. Let's not forget that the US Senate, then led by Republican Senator Mitch McConnell, refused to fill a Supreme Court vacancy in 2016 thus blocking the confirmation of President Obama's nomination of Merrick Garland. Then in 2020, McConnell switched gears and rammed through with lightning speed a Trump Supreme Court nominee to fill the vacancy caused by the untimely death of the great Ruth Bader Ginsberg, giving Donald Trump a total of three nominations to the Supreme Court.
The language in this draft decision evokes a dystopian, misogynistic worldview that would seem to regard the role of women as it is described in the Handmaid's Tale — that women ought to produce offspring, consent be damned.
While New York State continues to have some of the strongest laws in the nation protecting a woman's right to choose whether or not to terminate her pregnancy, I know that many people are justifiably anxious about the fate of millions of people throughout our country. According to the Guttmacher Institute, 58% of women aged 13-44 live in a state hostile or extremely hostile to abortion rights.
These fears are well-founded. Prior to the landmark Roe v. Wade decision in 1973, later upheld by Casey v. Planned Parenthood in 1992, hundreds of thousands of illegal abortions were performed in the 1950s and 1960s every year. This resulted in thousands of women experiencing medical complications that would otherwise have been preventable under the proper care of a medical professional, and hundreds of women died each year from their lack of access to safe and legal abortions.
However, New York will always remain a safe haven for people who seek reproductive rights. Less than 24 hours after the draft decision was leaked, rallies were organized around the state in opposition to this odious decision. I attended the rally in Albany, which was also attended by Governor Hochul, Speaker Heastie, and advocates from Planned Parenthood as well as many other allied organizations.
I am ready to get to work alongside my colleagues to ensure that we make it as easy as possible for New Yorkers and all Americans to access safe, high-quality reproductive healthcare in our communities. The right to choose to terminate a pregnancy is already enshrined in state law, but we can take one step further by amending our state constitution to protect this right. We can establish a fund to offer practical support and expand reproductive healthcare infrastructure, create a public directory of in-state abortion providers, protect New Yorkers from discrimination based on pregnancy or pregnancy outcomes, require public universities to provide abortion pills in campus health centers, ensure that reproductive health services (including abortion) are available via telehealth, establish civil protections for abortion providers against money judgments arising in another state, and more.
We will get through this difficult time, but the road ahead is not going to be easy. There are federal elections coming up in 2022 and again in 2024. We will need Americans all over the country who care about reproductive rights to make their voices heard at the ballot box, especially in states such as Arizona, Georgia, Nevada, Pennsylvania, Wisconsin, Florida, North Carolina, and Ohio — all of which will be electing a US Senator this year in addition to Members of Congress.
Please contact me if you have any ideas or thoughts on how New York can continue to protect a woman's right to choose whether or not to terminate her pregnancy, as well as reproductive rights overall.
Sincerely,
Jeffrey Dinowitz
Member of Assembly
Posted by 100PercentBronx at 6:04 PM