An Update from State Comptroller DiNapoli: NY's Economy & Finances in the COVID-19 Era

Total employment in New York State fell in March, and again—much more sharply—in April, with a combined loss of more than 1.9 million jobs. After five months of partial employment recovery since then, figures for September show significant if not severe lingering damage to job counts in every one of the State’s fifteen metropolitan statistical areas (MSAs).
New York City, an early epicenter of the COVID-19 pandemic, continues to feel the sharpest loss, with a net decline of 648,000 jobs, nearly 14 percent of its February total. Figures for the Orange-Rockland-Westchester MSA also show a large decline of 10.7 percent. But the bad news is not confined to downstate regions, with net losses of more than 10 percent also occurring in the Rochester, Syracuse and Glens Falls MSAs.
The Elmira area, where employment lagged most of the State’s other regions during the expansion that ended in February, has suffered proportionally smaller losses in recent months. 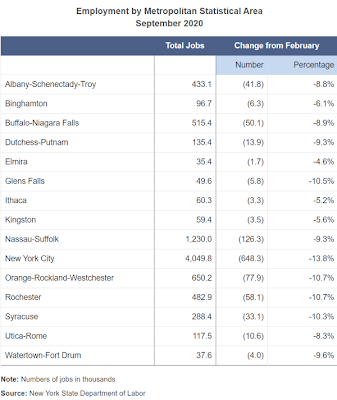