To honor the many veteran's buried at Woodlawn Cemetery there is an annual Veteran's Day Ceremony that dates back to the end of World War One. There is a plaque set in the rock that makes up part of the cemetery commemorating Armistice Day, the signing between Allied forces of World War One and Germany. That was the war to end all wars.

State Senator Jamaal Bailey brought his two daughters to see what their father does. He went over the program with one, so she would know what would be going on. After Senator Bailey gave an opening remark, Mitch Rose of Woodlawn Cemetery said a few words of the commitment to the community which Woodlawn Cemetery has by hosting events such as this.

After the Pledge of Allegiance, and National Anthem Senator Bailey, Assemblyman Dinowitz, and Councilman Cohen gave remarks about what Veteran's Day means to each of them. The three elected officials were joined by Quamid Francis Deputy Chief of Staff and Chief Diversity Officer NYC Department of Veteran's Services to lay a wreath beneath the plaque celebrating Armistice Day. 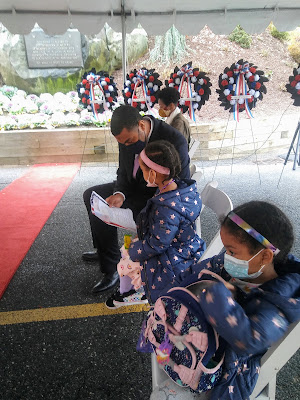 Above - Senator Bailey going over the program with one of his daughters.

Below - Senator Bailey speaking in front of the Woodlawn Cemetery Armistice Day Plaque. 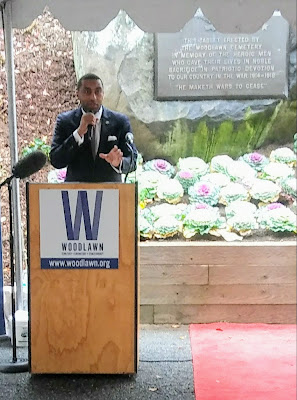 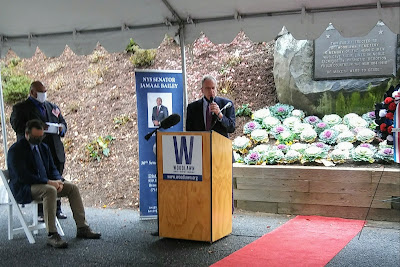 Above - Assemblyman Dinowitz speaking as Councilman Cohen waits to speak.

Below - (L - R) Quamid Francis, Senator Bailey, and Assemblyman Dinowitz, after laying a Wreath beneath the plaque honoring Armistice Day 11/11/1918. 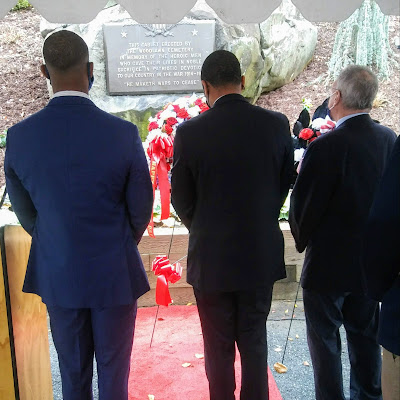