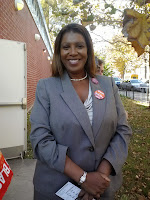 New York Attorney General Letitia James has urged the U.S. Food and Drug Administration (FDA) to take action and protect the health and well-being of babies across the United States by setting uniform standards across all baby foods. In a letter to Acting FDA Commissioner Dr. Janet Woodcock, Attorney General James urges the FDA to follow recent congressional recommendations that would set standards for all baby food, not just rice cereal, and that would require all food manufacturers to test their finished products for toxic metals rather than just their separate ingredients.

“Right now, parents across the nation are unknowingly feeding their babies dangerous, toxic metals because these companies are not doing their due diligence to protect our children,” said Attorney General James. “This shouldn’t be controversial, this shouldn’t even be a question, unsafe levels of arsenic and other toxic metals do not belong in baby food. Period. But after four years of an administration that catered to the business community’s profits over the health and safety of our families, this report has spotlighted a disturbing issue affecting parents buying baby food every day. I’m calling on the FDA to do its job and ensure the health and safety of every child in America by setting uniform standards related to toxic metals across all baby foods. Our families cannot accept any less.”

The House Oversight and Reform Committee’s Subcommittee on Economic and Consumer Policy recently published a report that determined that there are high levels of toxic heavy metals — including arsenic, lead, cadmium, and mercury — in baby foods being sold by at least four of the nation’s seven largest manufacturers. Notably, three manufacturers — including Walmart (Parent’s Choice), Campbell (Plum Organics), and Sprout Organic Foods — refused to cooperate with the congressional investigation. Though the FDA does set limits on toxic metals in other consumable products — like bottled water, juice, and candy — the agency has failed to adequately regulate baby food.

In fact, after years of effort, the FDA only recently regulated the level of inorganic arsenic in rice cereal for infants at a maximum of 100 parts per billion, which notably is still 10-times greater than what is allowed for bottled water.

In the absence of FDA leadership and oversight over the last four years, baby food manufacturers have been able to set their own internal standards for levels of toxic metals. But the congressional report highlights how some companies regularly do not even comply with their own guidelines — which can contain ingredients with toxic metals already several hundred times the maximum levels recommended by the American Academy of Pediatrics, Consumer Reports, and the Environmental Defense Fund.

Attorney General James notes that the cumulative impact of dangerously high levels of these heavy metals poses serious risks for the health and development of infants and young children. Continued exposure can affect a child’s brain development, behavior, and intelligence quotient (IQ) over the long-term.

Attorney General James calls on the FDA to take immediate action to protect children by implementing the recommendations set forth by the congressional report and setting uniform standards related to toxic metals in all baby food. Attorney General James is simultaneously exploring all legal options.