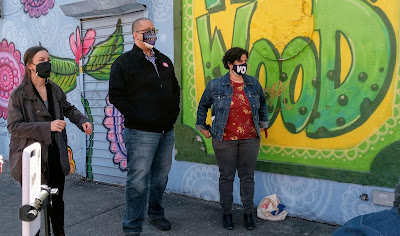 What was billed as a press conference for two state senators to endorse a candidate for city council, and bash outside money going to her opponents was held in the senate district of Bronx Democratic Party Leader Jamaal Bailey who is endorsing one of the candidates who is receiving said so called outside money. State Senate candidate Gustavo Rivera was the beneficiary of over $250,000.00 of outside money in his 2010 State Senate bid against Incumbent Pedro Espada and Dan Padernacht, who coincidentally in this city council race. Senator Rivera would tell me after the press conference that he did not receive the money directly, it went into a PAC, which is the same here with the council candidates

Senator Gustavo Rivera was the first elected official to speak, and he began by bashing Bronx Borough President candidate Fernando Cabrera for running against him in 2014 and again in 2016. He then said how outside money influences a race.

Candidate Lora said this is our Bronx, we are tired of being treated like second class citizens, they are scared of us, and other comments out of the playbook of the Working Families Party who organized this event.

As for the truth, integrity and honesty, Mino Lora says she founded the People's Theatre Project (PTP), when in fact on its website it lists Bob Braswell as a co-founder who is listed as living at the same address as Mino Lora. Mr. Braswell donated $275.00 to Ms. Lora's campaign. In Ms. Lora's speaking about the People's Theatre Project one would think it is in the council district or at least the Bronx, but the PTP is in the Washington Heights area of Manhattan. S o M. Lora is taking care of upper Manhattan children, not District 11 children who are very different.