It was cold outside, but very warm inside of PS 85 on Marion Avenue where AT&T joined with Bronx Borough President Vanessa Gibson to hand out Samsung A7 tablets and backpacks filled with water bottles, healthy snacks, notebooks, and pencils to the children and families impacted by the tragic fire at Twin Peaks North West.

There was a press conference outside the school by Borough President Gibson, Congressman Torres, Councilman Oswald Feliz, Bronx Executive Superintendent Erika Tobia, and representatives from AT&T showing off the Tablets and backpacks. It was said that along with the tablets that AT&T would also be giving six months of free WiFi. State Senator Gustavo Rivera and Assemblywoman Yudelka Tapia scheduled to be at the school were still in Albany in session.

After the press conference Borough President Gibson, Councilman Feliz, Superintendent Tobia, and representatives from AT&T went into the library to hand out the tablets and backpacks to the children. 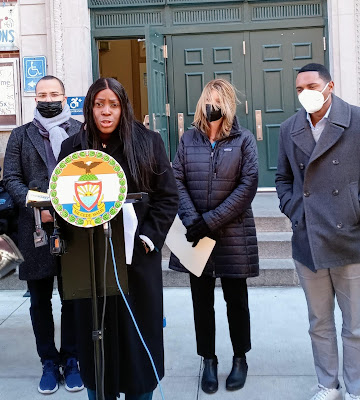 Bronx Borough President Vanessa Gibson gives an update on the Twin Peaks fire, and says that many families do not want to return to the building, and they will be given alternate housing. Councilman Feliz, Bronx Superintendent Tobia, and Congressman Torres are also in the photo at the entrance of PS 85. 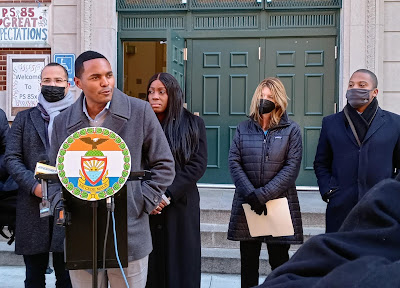 Congressman Ritchie Torres speaks about the tragic fire, and how the children and families must get the needed support so they can continue to live after the fire. 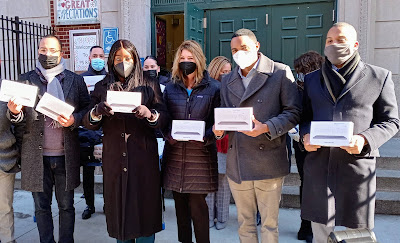 The elected officials and Bronx Superintendent are joined by AT&T representative Timothy Tapia (far right) as they hold up the tablets to be given to the children from the Parks fire. 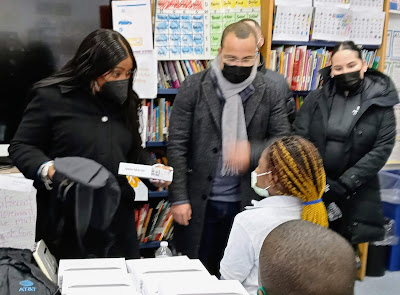 Bronx Borough President Vanessa Gibson seems to have better luck with this child than Councilman Feliz who is pointing to the BP, as she has a tablet in one hand and a backpack in the other for her. 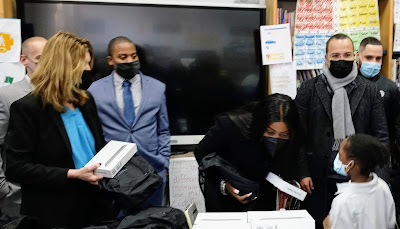 As Borough President Gibson works her magic on this child, representatives of AT&T look on as does Councilman Feliz. 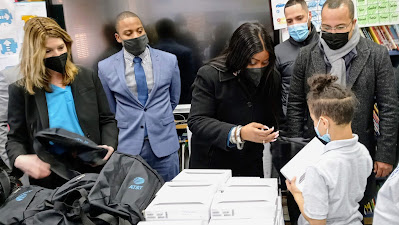 Once again Borough President Gibson is working her magic while everyone watches. BP Gibson said that she has several young children in her family, and what she did today just comes natural because of her family.