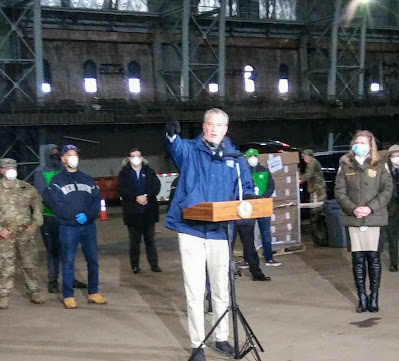 There I was in the Kingsbridge Armory, pointing upward to a higher goal. To use the armory for a food distribution center to those who were in lockdown, since it was not going to be an Ice Palace during my and Bronx Borough President Ruben Diaz's administration. Ruben is in the New York jacket hoping the Yankees would win that year, but my Boston Red Sox took the division.

Yes that's Katherine Garcia in green on the right, and I hope she will be working once again for me when I am elected governor of New York State. Oops I shouldn't have said that since I haven't announced that I am running for governor yet. My consultants are telling me to wait until I am about to throw the switch to drop the ball on New Year's Eve to announce that I am running for governor. It seems that they are also telling me that Governor David Paterson, I mean Kathy Hochul is clearing the way of opponents, and I have a target on my back now that AG James is out of the way.