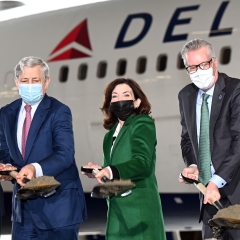 Groundbreaking for Terminal Expansion that will Unify Delta Operations, Add 10 New Gates to T4 and Expand Check-In and Arrival Areas

Governor Kathy Hochul today celebrated a key milestone in the Port Authority’s transformation of John F. Kennedy International Airport with the groundbreaking for a $1.5 billion privately financed expansion and modernization of Terminal 4. Earlier this year, the Port Authority of New York and New Jersey reached a revised agreement with Delta Air Lines and JFK International Air Terminal (JFKIAT), the operator of Terminal 4, to expand the facility and to consolidate Delta operations there.

“Today’s groundbreaking is a huge part in the story of New York’s comeback from the hardship we underwent during the pandemic,” Governor Hochul said. “The economic impact of this transformation will be felt for decades, while solidifying our state’s global leading role in welcoming visitors from abroad and those returning home. I look forward to all this partnership with the Port Authority and Delta will bring to New York.”

A restructured and revised agreement for Terminal 4 was successfully negotiated earlier this year and approved by the Port Authority Board of Commissioners at the April board meeting. Initially authorized by the Port Authority Board in February 2020 prior to the pandemic, the plan was revised due to the severe impact of the COVID-19 pandemic on air travel. Earlier this year, the Board agreed to enter into a revised lease amendment with JFKIAT and Delta for the expansion and renovation of the Terminal 4 arrivals and departures hall, a major concourse expansion to add 10 new gates, the renovation of existing concourses, and roadway upgrades to improve access for vehicles. The expansion at Terminal 4 is expected to be complete with Delta consolidating its operations in 2023. The expansion and upgrade of Terminal 4 is expected to result in over 1,500 total jobs, including over 1,000 union construction jobs.

The $1.5 billion Terminal 4 project, which is being financed by private capital, is the second groundbreaking under the JFK Redevelopment Plan. The terminal expansion will create 10 new gates, primarily serving regional and domestic flights, while adding 150,000 square feet to expand the terminal.

This expansion will allow Delta to offer connecting customers a seamless travel experience by consolidating all of its operations into Terminal 4, allowing for more convenient customer transfers Delta currently operates out of both Terminal 4 and Terminal 2. The project will include a new Delta Sky Club in Terminal 4's Concourse A, as well as expanded seating areas and concessions, modern wayfinding, and new or upgraded restrooms designed with travelers in mind.

In addition, the terminal will undergo a renovation program to improve the customer experience with new check-in counters that will improve capacity and efficiency with state-of-the art technology, installation of new self-service kiosks and self-bag check locations, renovations to restrooms, baggage claim and arrival areas, as well as new retail finishes and public art.

Delta continues to grow at JFK and in New York City at large, where it offers the most flights and seats of any carrier at JFK and LGA with 400 total daily departures to 95 domestic and international destinations. The airline operates more than 160 average daily flights to 68 destinations worldwide from JFK alone. Since 2010, Delta has invested more than $3.5 billion in airport expansion and redevelopment in New York, including earlier projects at JFK and LaGuardia Airport. The airline is also undertaking a $3.9 billion project to consolidate Terminals C and D at LGA, with a state-of-the-art arrivals and departures hall set to open next spring.

JFKIAT, a U.S. affiliate of Royal Schiphol Group, has been the operator of Terminal 4 at John F. Kennedy International Airport since 1997. The expansion will further enhance the terminal's offerings for its almost 30 airline partners with technologies to ensure expedited and seamless passenger processing capabilities, additional food options, and other amenities to ensure passenger comfort and convenience.

The redesign of Terminal 4 - which became the first air terminal to achieve LEED Gold O+M certification in 2017 - will continue a commitment by the Port Authority and JFKIAT to energy efficiency, utilizing energy saving equipment and lighting throughout the terminal.

In keeping with the Port Authority's Net Zero emissions’ goals and standards for transitioning to all electric vehicles across its facilities, the project includes charging stations for electric ground service equipment at the new gates, along with a deicing recovery system to capture spent deicing fluid.
The initial plans to redevelop JFK airport were delayed due to the effects of the Covid-19 pandemic, which meant that the original agreement for the project needed to be restructured. Now, the expansion and renovation of Terminal 4 will be fully financed by Delta Air Lines and JFKIAT.

The groundbreaking for the expanded Terminal 4 builds on the momentum of the other three major components of JFK's transformation. Overall, all four major projects to transform JFK airport will total roughly $15 billion in private investment.

The year ahead will witness significant activity and milestones as part of the JFK Redevelopment program. Construction of both the new Terminal 6 and Terminal One will break ground in 2022 and construction of the redeveloped Terminal 8 will be completed in 2023.

Redeveloping JFK Airport in Lockstep with the Local Community

In 2018, JFK Redevelopment Community Advisory Council was formed. It is co-chaired by U.S. Representative Gregory Meeks and Queens Borough President Donovan Richards and composed of elected officials, community boards, business and nonprofit organizations, civic organizations, and clergy leaders from the targeted local communities of Southeast Queens, Southwest Queens, the Rockaways, and western portions of Nassau County. Since its inception, the Council has been working with the Port Authority to expand community outreach efforts and develop community-focused programs, ensuring that this ambitious project solicits ongoing feedback from local stakeholders and provides meaningful opportunities for local businesses, MWBEs, students, and jobseekers.

This includes programming to advance the Port Authority's commitment to a 30 percent MWBE contracting goal in all categories of work, and a special focus on opportunities for local businesses across all aspects of the JFK Redevelopment program, including this terminal project, which will be built by union labor under a full project-labor agreement. Other community development initiatives prioritized by the Council focus on job opportunities and workforce development programs for local residents, small business outreach and development, and educational programming for local students.