Wednesday night was the bi-monthly Morris Park Community Association meeting. The Meeting opened up with the Pledge of Allegiance, and went into the chairman's report. This was not a positive report as it was mentioned that quality of life issues have gone down with the current mayor and elected officials who voted for the No Cash Bail Law, which allows most criminals back on the street in hours, giving little or no protection to victims. The chair said the use of the center by the Board of Elections went well, the community had a local place to vote early, and the Association made a few dollars on the rental of the building.

The 49th Police report was next with a report of three shootings on blocks near or around Columbus High School. It was said that at the moment it does not look like there was gang involvement. Officer Nicewitz the Sector A NCO officer introduced Sergeant Hines who is the supervisor of all the sectors, and NCO officers. Officer Nicewitz then warned not to leave your car running as someone can just jump in and steal your car. He also warned to be on your guard when seeing two people riding on a moped, as one might jump off to rob you, then jump back on to get away.

Sector A NCO officer Patrick Nicewicz talks about what is going on police wise in the sector, and introduces New NCO Sergeant Hines. 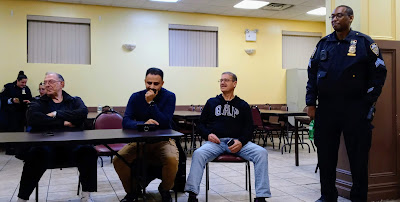 49th Precinct NCO Sergeant Hines introduces himself, and gives his experience as a police officer.