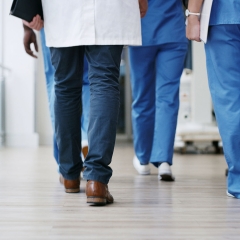 Governor Kathy Hochul today announced additional resources from the federal government will arrive in New York State as early as next Monday, providing relief to hospitals and emergency services through patient load balancing and responding to 911 calls during the COVID-19 winter surge. Two U.S. Department of Defense Military Medical Teams (MMT) will support NYC Health & Hospital Facilities beginning Monday, January 24, at Coney Island and a second on Friday, January 28, at North Central Bronx. These teams are estimated to have more than 20 members, including physicians, nurses, respiratory technicians and command staff. They will assist in offsetting patient capacity and be mobilized for approximately 30 days. In addition to the MMT's, Governor Hochul also announced another 30 National Ambulance Contract Teams will be arriving in upstate regions beginning Sunday, January 16, to provide backfill for local emergency services and hospital transports.

"I want to thank President Biden for honoring our request, and deploying much-needed medical teams to New York State to help us fight the winter surge," Governor Hochul said. "These critical resources will build on our ongoing winter surge plan efforts to assist our overstressed hospitals so they can maintain patient care, and relieve some of our exhausted medical staff and emergency responders."

The resources announced today build upon existing assets from the federal government already deployed in New York State, including two deployed Disaster Medical Assistance and Military Medical Teams, one at Erie County Medical Center and one at SUNY Upstate in Syracuse, as well as 80 ambulance teams supporting downstate and upstate regions.

Governor Hochul also announced today, the U.S. Department of Health and Human Services will be deploying a second DMAT to continue to assist SUNY Upstate with patient load balancing and 911 calls. 19 emergency medical professionals have arrived from Texas and will take over the mission from the current DMAT, based out of Oklahoma, on January 15. The new team will be on site until January 26, with the mission of easing overburdened emergency medical service providers.

Division of Homeland Security and Emergency Services Acting Commissioner Jackie Bray said, "These critical resources deployed by our federal partners are much appreciated and necessary as we work to combat the surge in hospitalizations across the state. We're all in this fight together and I'm thankful for the additional support our emergency service providers are receiving. The Division will continue to provide state resources to local governments to help all New Yorkers as we have throughout the pandemic."

Department of Health Acting Commissioner Dr. Mary T. Bassett said, "Our healthcare providers and emergency services personnel are working around the clock to get us safely through the Omicron winter surge and we are grateful for the support from the federal government to help alleviate some of the stress on our vital healthcare workforce. We welcome this newest team of professionals to New York and thank them for their service."

Governor Hochul is renewing her call for additional medical staff support in upstate regions, particularly in the Finger Lakes. There is an existing request into the federal government for more than 900 clinical staff to mobilize strike teams across the state. So far, approximately 60 personnel from the DMAT teams are in New York, assisting at ECMC and SUNY Upstate.