The good news is that the death toll has been reduced by two people from nineteen to seventeen, nine adults and eight children. However fourteen people remain in various hospitals still in critical condition. Two sites, Monroe College located at 2501 Jerome Avenue West 190th Street, and the Bronx Islamic Center located at 371 East 166th Street are being used for drop off locations for donations of material goods.

Two bodies have already been buried, and on Sunday January 16th the remaining fifteen bodies will be brought to the Bronx Islamic Cultural Center located at 371 East 166th Street for a unified prayer service beginning at 10 AM for all fifteen victims. Eleven will then be buried here in this country, while the remaining four bodies will be flown to Africa for burial there. The public is invited to this prayer service, in which many elected officials have confirmed their attendance, many members of the media, Bronx and other residents of the city are expected. This will be the largest outpouring of respect for the Muslim community, and those who attend are asked to observe the culture by making no disturbances. The service is expected to end at noon, where the bodies will be transported for burial.

There was a press conference Thursday afternoon by City Council members Oswald Feliz, Pierina Ana Sanchez, and Assemblywoman Yudelka Tapia to update what is going on. Councilman Feliz whose district the building that caught fire is in said that while some tenants of the higher floors of the nineteen story building are being let back into their apartments, others can stay in the hotels that have been provided until January 24th. Then the building should be in better shape allowing most residents back into their apartments. He said that people who do not want to go back will be given the option of different housing.

There was a deadly fire three year ago when a small child turned on a stove burner, and smoke went throughout that building killing several people because the fire doors were not closed. At that time it was said that all fire doors in buildings would be inspected and fixed. I asked Councilman Feliz when the fire doors at 333 East 188th Street were inspected, and what the inspection report said. He said he would have to check the reports to know. As for the building, it was built in 1972 under federal guidelines that Fire Commissioner Nigro said were less stringent than New York City guidelines.

The owners who bought the building two years ago, Camber Property Group, also own affordable and mixed income multifamily housing throughout the New York Metro area according to their website. 333 East 188th Street was a Mitchell Lama building that is being converted to a rental building. Reports of residents complaining of lack of adequate heat may be justified by the number of residents who used space heaters such as the apartment where the fire occurred, which had multiple space heaters that were left on overnight. 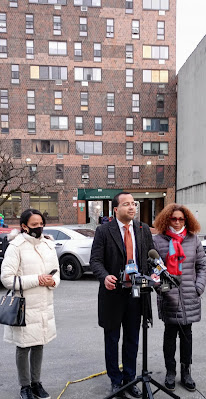 Councilman Oswald Feliz, Councilwoman Perina Ana Sanchez to his right in the white coat, and Assemblywoman Yudelka Tapia to his left in front of 333 East 188th Street. 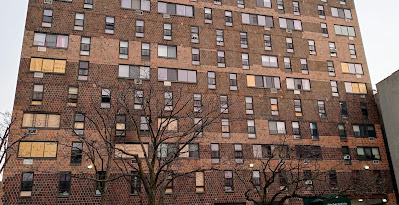 Thursday afternoon five days after the fire many windows are still boarded up, with residents of the top floors of the nineteen story building only allowed to go back to their apartments.

The memorial next to the building.

Boxes of food were prepared outside the Bronx Islamic Cultural Center to be given out. The prayer service will be held here at 371 East 166th Street Sunday January 16th starting at 10 AM.