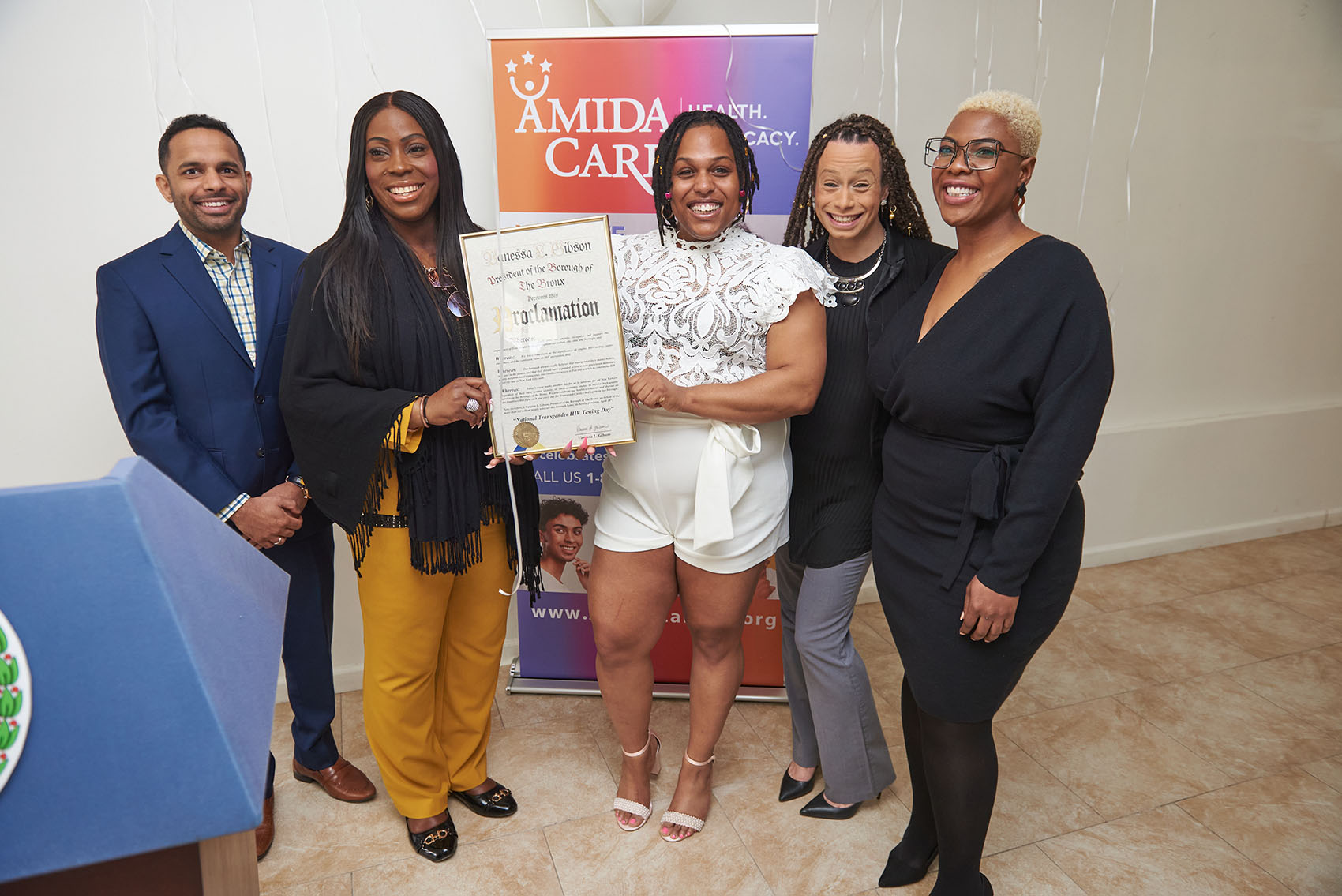 BP Gibson and advocates outline health disparities faced by people of transgender experience in the Bronx, and encourage New Yorkers to get tested for HIV

On Monday, April 18, Bronx Borough President Vanessa L. Gibson and Amida Care, a not-for-profit New York community health plan, were joined by advocates and health care providers at Destination Tomorrow in the Bronx to recognize National Transgender HIV Testing Day. The event highlighted the health disparities faced by people of transgender experience in the Bronx, and encouraged Bronxites to get tested, and learn about HIV prevention and treatment. Borough President Gibson issued a proclamation declaring April 18 as National Transgender HIV Testing Day in the Bronx and announced the relaunch of the Bronx LGBTQIA+ Taskforce.

“As Bronx Borough President, I am committed and dedicated to reducing the spread of HIV in our transgender community, and to making sure our brothers and sisters who are living with HIV continue to receive the quality, patient-centered care they deserve – regardless of their gender identity,” said Bronx Borough President Vanessa L. Gibson. “That is why today, I am issuing a Proclamation declaring April 18th as National Transgender HIV Testing Day in the Boogie Down Bronx, and announcing the relaunch of the Bronx Borough President’s LGBTQIA+ Task Force. Our goal with this Task Force is to bring together experts, advocates, and community partners to take a holistic approach to supporting and uplifting our Bronx LGBTQIA+ community. We cannot and will not do this work alone, and I am thankful to Amida Care, Essen Health Care, Destination Tomorrow and all of our other partners that joined us today to combat this epidemic and stand with our TGNC community.”

The trans community continues to be disproportionately impacted by HIV. Transgender women are estimated to be 49 times more likely to be living with HIV compared to the general population. Additionally, the Bronx had the second highest number of new HIV diagnoses in 2020, and the highest percentage of HIV deaths. Due to the COVID-19 pandemic, HIV testing slowed dramatically—HIV testing in New York conducted through AIDS Institute-funded sites averaged well over 2,500 tests per month in 2019. But that tally dipped below 500 tests per month in April 2020 and did not reach 2,000 tests in any given month through June 2021.

“We are proud to be here on National Transgender HIV Testing Day to celebrate the progress we’ve made towards ending the HIV in New York, and call for a renewed focus on communities that continue to be disproportionately impacted by the epidemic. Sadly, the Bronx continues to have the highest rate of HIV deaths in New York City, and New Yorkers of transgender experience – particularly trans women of color – are more likely to be living with HIV than the general population. We’re encouraging everyone to get tested and learn your status, so you can live your healthiest life and ensure you aren’t passing HIV on to others,” said Sandrine Blake, Assistant Director of Member Events, Amida Care.

Almost half (43%) of Amida Care’s members are Bronx residents, and more than 20% of their members are people of transgender experience. Amida Care’s viral suppression rate amongst their HIV-positive transgender population is at 94%, which is well above the national averages.

“I remember growing up and the first thing I learned about what it meant to be gay, what it meant to be trans, was that you were diseased, and you were wrong and unworthy. It took me 28 years, but I can finally stand here today and tell my community: we’re not diseased, we’re worthy. I am enough. You are enough. We’re all enough,” said Mimi Shelton, Director of Trans Initiatives at Destination Tomorrow. “We’re not only enough, but we’re worthy of proper care, as well as access to intervention and prevention services for HIV. We’re worthy, not only of people’s tolerance, but of their acceptance.”

“It’s important to find out your status so we can start treatment. Testing is just the first step,” said Dr. Binu Kuriakose, Medical Director, Urgent Care, Essen Health Care. “We’ve come a long way from when HIV was first discovered. Now, if you find out your status early, we can offer treatment and everyone is able to live a long, healthy life. Our goal is access to care. Please come to our sites. Please get tested and find out your status. Let us help you so we can reduce HIV transmission in the Bronx.”

“The HIV epidemic has taken a disproportionate toll on people of color, particularly trans women of color. In 2019, transgender women of color accounted for 91% of new HIV diagnoses among transgender women in New York City. The first step to addressing these disparities is for people to get tested,” said Lailani Muniz, Bronx resident, community activist, and Amida Care member. “I’ve been living with HIV for 16 years, and I’ve been undetectable for 16 years. I want people to know that if you’re living with HIV, you can take medication to become undetectable and live your healthiest life like me.”