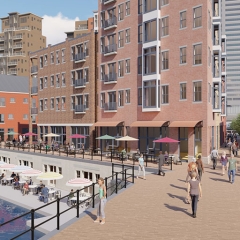 Governor Kathy Hochul today announced a request for proposals to redevelop the North Aud Block in Buffalo, the State’s final remaining parcel to be developed at Canalside. This RFP presents an opportunity for experienced real estate developers to transform the nearly two-acre site, which is key to the ongoing revitalization of downtown Buffalo. New York State previously committed $10 million in funding to transform the North Aud Block, which will be made available to the selected developer to support site infrastructure. Erie Canal Harbor Development Corporation, a state entity, envisions that the project will include retail, restaurants, office space, apartments, a hotel and structured parking within several buildings. The project will incorporate portions of the 19th-century street grid while allowing modernization that acknowledges the site’s 21st-century surroundings and infrastructure, blending historic details with the current surrounding City. See concept renderings and a map of property here. Proposals are due by 3 p.m. on Thursday, September 1.

“Canalside has become a destination location and catalyst for renewal of Buffalo’s historic waterfront,” Governor Hochul said. “Redeveloping the North Aud Block will help boost the economy, open new public spaces and make the Buffalo waterfront an even more popular place to live, work and play. The Erie Canal was a bold and audacious undertaking that no one thought was possible, and New York continues to build on our proud legacy with this transformative project.”

The site is primarily vacant and was once part of a superblock and home to Buffalo Memorial Auditorium, which the state demolished in 2009. This RFP permits respondents to propose a variety of uses, though proposals are required to include certain mandatory design features, as per the Canalside Design Guidelines.

The assumed development plan includes nearly 425,000 gross square feet in several buildings with an estimated 200 residential apartments and commercial spaces, office/operations space for ECHDC, and up to 450 parking spaces located in a structured ramp that would be constructed both below and above grade. The multiple building development is encouraged to be set within a reconstructed historic street pattern, allowing more of Lloyd Street and Commercial Street to be reconstructed to complete missing sections.