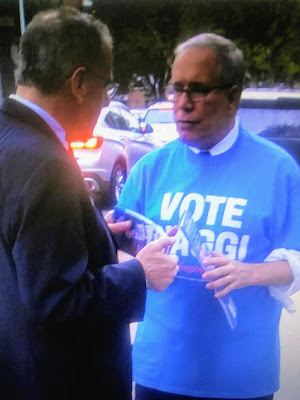 Pictured above are former members in the State Assembly  Scott Stringer and Jeffrey Dinowitz during the 2018 State Senate race Campaigning for different candidates in Riverdale.
Scott Stringer's mayoral campaign shifted into low gear when City Council Speaker Cory Johnson pulled out of the race for mayor. It was thought by some that a 1 - 2 Stringer/Johnson or 1 - 2 Johnson/Stringer ticket would put one of those two candidates for mayor into Gracie Mansion over then favorite Eric Adams.
Stringer said of the sexual accusations against Governor Cuomo that the governor should step down. The shoe is now on the other foot as it is said, because it is Stringer who is being accused of making sexual advances to Jean Kim who said Stringer did it to her while she was an intern on his 2001 Public Advocate race.
While he does deny the accusations, Stringer claims that the two had a strictly consensual relationship that occurred before he married his current wife to whom he has two children by.
State Senators Alessandria Biaggi, Julia Salazar, and Assemblywoman Yuh-Line Niou issued the following statement:
"As survivors of childhood sexual assault, we believe survivors",
"Our commitment to a harassment free government, workplace, and society is steadfast, and our zero tolerance standard regarding sexual assault applies to abusers like Andrew Cuomo, if not more so, to our friends. This standard also applies to everyone who participates in the normalization or erasure of abuse. we always hold space for anyone to safely come forward to share their experiences, and will demand accountability accordingly."
While State Senator Jessica Ramos rescinded her endorsement of Scott Stringer for mayor, State Senator Gustavo Rivera said that he urges Scott Stringer and his campaign to demonstrate respect for all survivors by rejecting attacks on Ms. Kim as an individual, falling short of either asking for Stringer to pull out of the race for Mayor or his support of Stringer for Mayor.
Mayoral candidates calling for Stringer to pull out of the race for mayor are Kathryn Garcia and Shaun Donovan, while Eric Adams, Ray McGuire, Dianne Morales, Maya Wiley, and Andrew Yang supported accuser Jean Kim, but would not call for Stringer to pull out of the mayoral race.
Posted by 100PercentBronx at 11:44 PM