The mayor also announced the appointment of Laura Wood as New York City’s Chief Democracy Officer. A native New Yorker, Laura has served as Senior Advisor and General Counsel to DemocracyNYC since 2019. Prior to this position, she spent five years as Senior Advisor and Special Counsel to the New York State Attorney General. Before that, Laura was Chief Counsel to the Democratic Conference of the New York State Senate and Policy Director to State Senator Daniel Squadron.
“New York City is set to conduct the biggest Ranked Choice Voting election in America, and we’ll put on a full court press to ensure every New Yorker has the information they need to make their voice heard,” said Mayor Bill de Blasio. “Laura Wood is an extraordinary public servant who knows how to reach deeply into communities. She’s the perfect choice to lead this unprecedented effort to get voters ready to participate in democracy in 2021 and beyond.”
“There’s nothing more fundamental than the right to vote – and this year, we have to work harder than ever to make sure New Yorkers use their franchise knowledgably and wisely,” said J. Phillip Thompson, Deputy Mayor for Strategic Policy Initiatives. “This campaign will give voters the resources they need to adjust to the new system and tell friends and neighbors about the importance of Ranked Choice Voting.”
“With New Yorkers facing so many challenges, learning about the upcoming elections and Ranked Choice Voting should not be one of them,” said Chief Democracy Officer Laura Wood.  “In this final stretch before the primary, DemocracyNYC is thrilled to work together with our partners – both in and out of government – to ensure that all New York City voters have their voices heard at the ballot box in June. This new commitment will allow us to educate voters where they live and in the languages that they speak.”
The campaign will include:
Citywide Media Campaign
* Robust TV, radio and print advertising, including significant investment in community and ethnic media.
* A broad “out of home” campaign which includes subway, billboards, and Staten Island Ferry, including 542 bus shelter and newsstand ads.
* Digital media on popular app platforms and streaming services.
* Continued collaboration with BRIC Media on a “BHeard Civic Engagement and NYC Politics” series.
* Promotion of a multilingual, interactive online app, developed with RankedVote, which mimics the New York City ballot and helps New Yorkers practice and understand how Ranked Choice Voting works.
Language Access and Accessibility Resources
* Investing over $2 million in translation of key voter education resources into more than 18 languages including printed pamphlets and public service announcements.
* Culturally competent video content to be produced, in partnership with CUNY and the Mayor’s Office of Immigrant Affairs, for We Speak NYC, the City’s free English language learning program which provides civic-focused instruction through community conversation workshops and videos.
Direct Outreach
* Investments in MWBEs, Community-Based Organizations, faith-based organizations, and other community leaders and groups to do in-person outreach, education, and material distribution.
* Hosting and facilitating dozens of multilingual voter education workshops.
* Conducting Phone Banking Days of Action to Get Out the Vote for the June Primary.
* Text Banking New Yorkers with a goal of three million text messages, including a Voter Registration Day of Action on May 11th.
* Working with the CUNY student corps to conduct voter outreach, voter education and volunteer recruitment.
EDITOR'S NOTE:
This plan seems all well, but we don't see the very most important part of any election mentioned, and that is the NYC Board of Elections.
The NYC BOE made up its own Rank Choice Voting guide at the entrance to each of the Special Election poll sites which was very informative to the voters. The BOE showed how Rank Choice Voting works, but also let voters know that they are not forced to vote for five candidates, they can rank from one to five candidates. 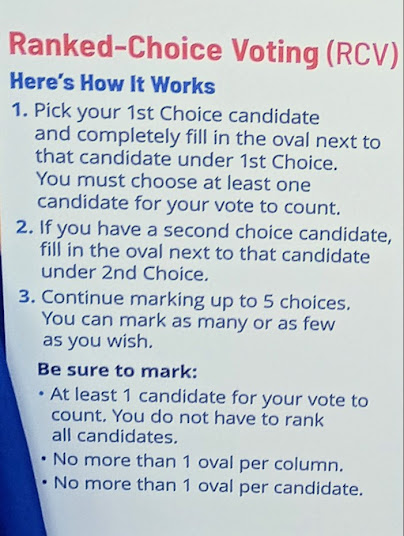