112 Days and Counting - Give Them Basketball, Right Senator Bailey 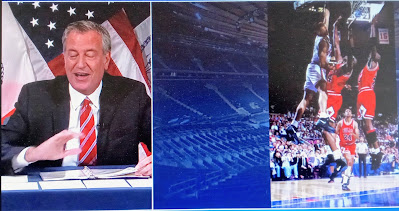 Let's see, which piece of paper is this one on, here it is. This is the famous dunk by New York Knick John Starks over Michael Jordan, and John is going to join us in a NYCHA Youth Basketball League with the New York Knicks. We will set up 144 team and the NYPD has refurbished 24 NYCHA basketball courts.

I want to bring in someone I met last week at the new Edenwald YMCA ribbon cutting, a rising star, State Senator Jamaal Bailey. Jamaal I heard that you did very well in your hoop shooting from John Starks, and I want to see you Senator Bailey in action in this new program. (Senator Jamaal Bailey speaking) Mr. Mayor I was on the Bronx Science basketball team called the Bronx Science Basketball Nerds, and we almost made it to the city championship round.

As for other business, today is Restaurant Vaccination Day. We will be vaccinating people outside many of your favorite restaurants. Eighty percent of the adults in the city have received at least one vaccine shot, and I will be introducing the criteria for a third booster shot program very soon.

As far as Rikers Island, I am working on many items with the state to improve the site, and I will visit Rikers when these upgrades and changes are done. As you see I am stalling, and they could be finished on the last day I am in office.