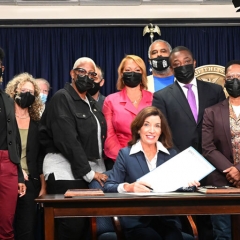 Signs the Less is More Community Supervision and Revocation Reform Act (S.1144A/A.5576A); 191 Individuals to be Immediately Released Having Served Their Sentences Under Less is More Standards

Governor Kathy Hochul today announced actions to improve justice and safety in city jails. The Governor signed the Less is More Act (S.1144A/A.5576A) which modifies the standard of evidence and certain other procedures when determining whether to revoke the community supervision of a person on parole. Governor Hochul also announced an agreement with the Department of Corrections and city to allow for incarcerated individuals who have been sentenced to at least ninety days to be transferred from Rikers Island to New York State facilities.

"Our fellow New Yorkers on parole deserve to reenter society with our support and respect - reincarcerating parolees for technical violations traps them and doesn't help our communities," Governor Hochul said. "New Yorkers currently serving sentences in jails and prisons also deserve our support - there is no justice in mistreating incarcerated New Yorkers. While this is just one step and more work needs to be done collaboratively with all levels of government, I am proud to take these steps to increase the safety in city jails, not only for those incarcerated, but for the staff who work tirelessly to keep operations running."

Lieutenant Governor Benjamin said, “I am thrilled that Governor Hochul is signing this historic parole reform bill today. When I was the state senator from Harlem, I introduced the Less Is More Act because the problem of mass incarceration had harmed our communities, and I knew we could have a safer, fairer, more just and equitable parole system in New York. I fought for years alongside the Less Is More coalition to get this bill through the legislature, and this year we finally did it. Today, as Lt. Governor, I am proud to stand with our Governor as she signs this bill into law. Through the Less is More Act, we can strengthen public safety -- that's why it's supported by District Attorneys and Sheriffs from around the state. And we can focus on racial justice and more effective reentry for people coming home from prison on parole -- that's why it's supported by more than 300 groups from every corner and region of our state. Over time, this bill will save the state hundreds of millions of dollars each year, and those funds can be more effectively focused on creating a stronger, safer New York for all, in every region of our state. I would like to thank our partners in the legislature for their work, and I would also like to thank all the community organizations that worked so hard to get this bill passed, in particular the Katal Center for Equity, Health, and Justice; Unchained; and A Little Piece of Light.”

The Less is More Act aims to ensure the Department of Corrections and Community Supervision focuses its resources on helping people successfully complete community supervision and avoiding future return to DOCCS custody or supervision.

In addition, with the Governor signing the "Less is More" bill, in the spirit of this new legislation, DOCCS is currently reviewing the current parole violators and will work with City officials to immediately release up to 191 individuals, who will no longer qualify for incarceration.

Agreement with City of New York

The Department of Corrections and Community Supervision has worked with the City of New York to leverage an existing statute that will allow for hundreds of definite sentenced incarcerated individuals, which are those sentenced to at least one day but less than one year, to be transferred from Rikers Island to State custody, where they will serve out their sentences in DOCCS facilities.

Governor Hochul is also directing that forty individuals sentenced to at least ninety days be sent off of Rikers Island each day to New York State facilities for the next five days. This will continue on a rolling basis for those eligible.