Sunday, the first night of Chanukah, the festival of lights in the Jewish tradition, was observed at the Bronx Jewish Center by Rabbi Saadia Pewzner and close to one hundred people Sunday afternoon. It was a Chanukah Wonderland.

On hand to help light the ceremonial menorah set up by the Rabbi, was Councilwoman Elect Marjorie Velazquez, who Rabbi Pewzner said was no stranger to the Bronx Jewish Center, and had been a friend from before she became involved in politics. Music was provided by Bobby Doowah, there were events especially for children, and a feast of food from potato latkes, to salad, chicken and jelly donuts.

The banner that greeted you as you went into the enclosed backyard area.

Inside a bouncy house was among the children's activities which included being an artist, and a small bowling alley. 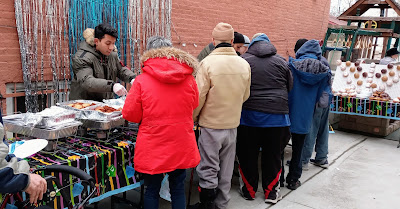 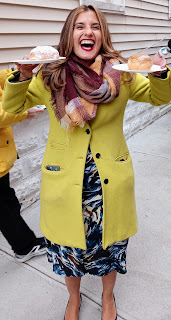 Councilwoman Elect Marjorie Velazquez took two doughnuts inside, one for her, and one for a friend. 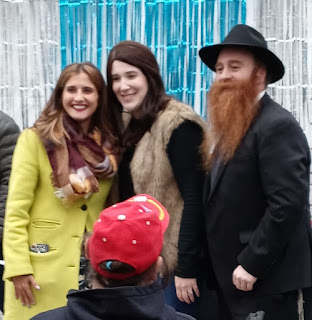 Councilwoman Elect Velazquez poses with Rabbi Pewzner and his wife Nachama, before being introduced to the full house by Rabbi Pewzner.

Councilwoman Elect Velazquez speaks to the audience with the band taking a few minutes off. 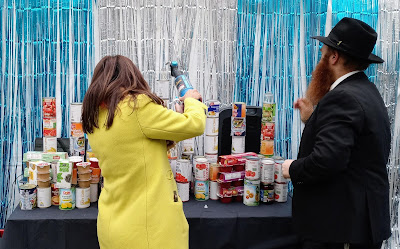 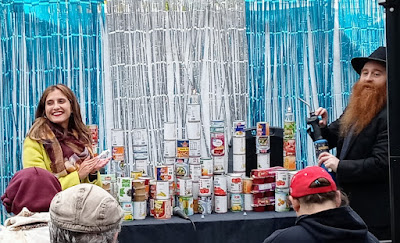 After lighting just the first candle on the right for the first day of Chanukah, Rabbi Pewzner says the Chanukah prayer. 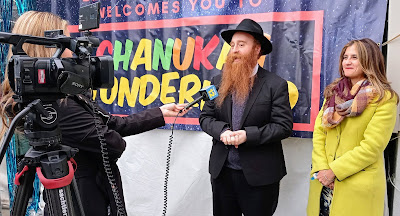 Councilwoman Elect Velazquez and Rabbi Pewzner were then interviewed by the local cable news channel about the holiday of Chanukah.