Congressman Ritchie Torres said he pushed for a HUD certified Heat Sensor Pilot Program between July 2020 and July 2021 in twenty-six federally funded buildings during a press conference Monday at the site of the fire resulting in seventeen deaths. He said that when a resident complains to 311 for a lack of heat, due to the low number of inspectors it could take days for an inspector to show up, and by then the building has heat. Torres also said while the mandatory 68 degrees during the day may suffice, the city mandated 62 degrees at night was not warm enough, so many families supplement the lack of building heat with space heaters.

Congressman Torres said a Heat Sensor monitors the temperature of an apartment making sure that the minimum temperature requirement is maintained. Should the apartment temperature fall below the minimum requirement it sends a signal by WiFi to a central office where an inspector is directed where to go to check the temperature level within a few hours, twenty-four hours a day. Torres stated in buildings where Heat Sensors were placed there was a 56% decline in heat complaints, 66% of the buildings had no violation, and no building had more than two violations during the trial period. He added that these Heat Sensors would go into every federally funded building such as 333 East 188th Street, and all NYCHA buildings. There would have to be a tax credit to pay for the installation of heat sensors in every apartment in eligible buildings.

When it was time for U.S. Senator Kristen Gillibrand to speak, she said after touring the devastation of the fire and smoke damage to the third floor she said that she would work in the U.S. Senate, while Congressman Torres will work in the Congress to get the mandate of Heat Sensors passed into law. Mayor Eric Adams took time out of his busy Martin Luther King event filled day citywide to also speak in favor of placement of heat sensors in federally funded buildings to monitor the amount of heat being given to tenants. Bronx Borough President Vanessa Gibson, Assemblywoman Yudelka Tapia, and Councilman Oswald Feliz all said they support the federal mandate of Heat Sensors.

Before the press conference, Bronx Borough President Gibson speaks to fire marshals about the fire and smoke that happened at 333 East 188th Street resulting in killing seventeen people.

U.S. Senator Gillibrand speaks of the devastation she saw during her tour of the fire area. She vowed to work on getting the Heat Sensors mandate passed in the senate. The sign to the right explains the pilot program of then Councilman Torres. 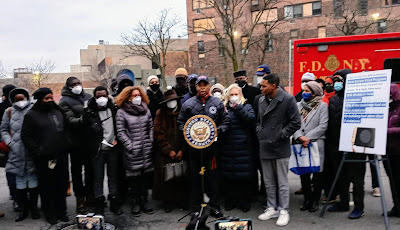 Mayor Eric Adams stressed the importance of landlords giving proper heat to tenants so the tenants do not have to buy unsafe space heaters to get the heat that is not being provided. 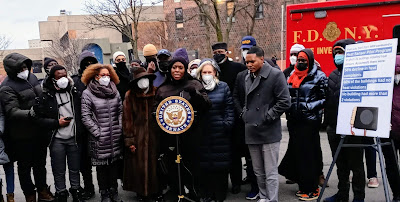 Bronx Borough President Vanessa Gibson shows the pain in her face as she once again has to speak about one of the deadliest fires in the current century which is now twenty-two years old. She endorsed the idea of Heat Sensors. 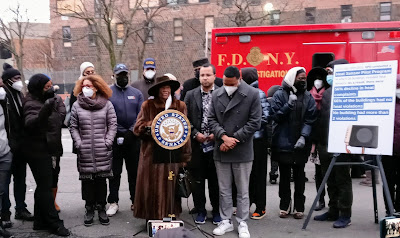 Hazel Dukes of the NAACP spoke on this MLK Day about the seventeen lives lost. 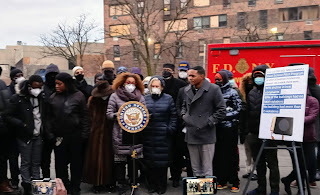 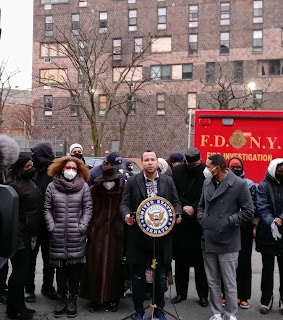 Councilman Oswald Feliz was the last speaker, and like those before him he also endorsed the idea of Heat Sensors to monitor the level of heat in buildings.
Posted by 100PercentBronx at 10:26 PM